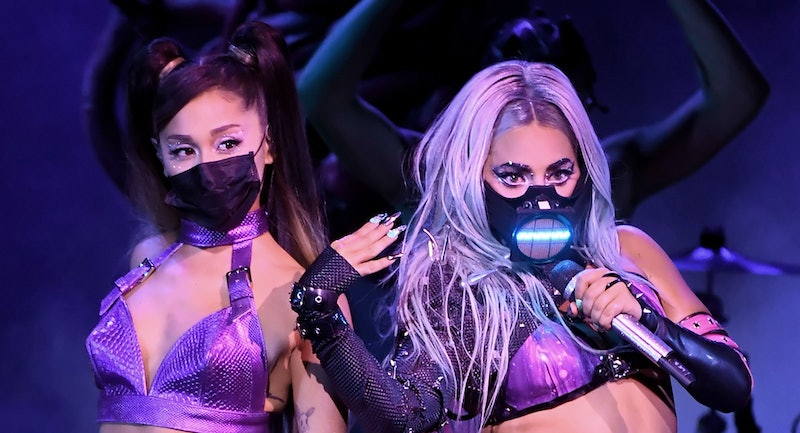 Gaga and Ari just made it rain at the 2020 MTV Video Music Awards. In fitting with the night's many COVID-related adjustments, Lady Gaga and Ariana Grande's VMA performance of "Rain on Me" was appropriately COVID-safe, as the women took the stage in chic masks.

A solo masked Gaga also performed a medley of "Enigma," "Chromatica II," and "911" from her Chromatica album. "I've been home dreaming of #Chromatica, and it's finally time to take off for the first live performance," she tweeted on Aug. 13. Less than a week later, Grande announced her participation in the "Rain on Me" world-premiere VMA performance in an Aug. 18 tweet, sharing a video that included a still from the song's music video, which dropped in May. (For her part, Gaga also retweeted Grande's post, adding a thunder cloud and fairy emoji, in addition to writing "can't wait" on her Instagram Stories.)

In a "happy VMA day" Instagram she posted hours before showtime, Grande called Gaga "f*cking incredible" while sharing her excitement about performing the chart-topper. She also thanked MTV for "being so diligent in making this such a safe & healthy experience for all of the performers and crew involved."

Grande and Gaga share the distinction of most-nominated 2020 VMAs artists, each earning nine total nods, including seven for "Rain on Me." (Video of the Year, Song of the Year, and Best Collaboration are among the track's noms.) Although Grande last performed "God Is a Woman" on the 2018 telecast, Gaga hadn't hit the VMAs stage since she opened 2013's show with "Applause." Additional 2020 VMAs performers include BTS, Miley Cyrus, The Weeknd, Doja Cat, Black Eyed Peas, DaBaby, Maluma, and CNCO.