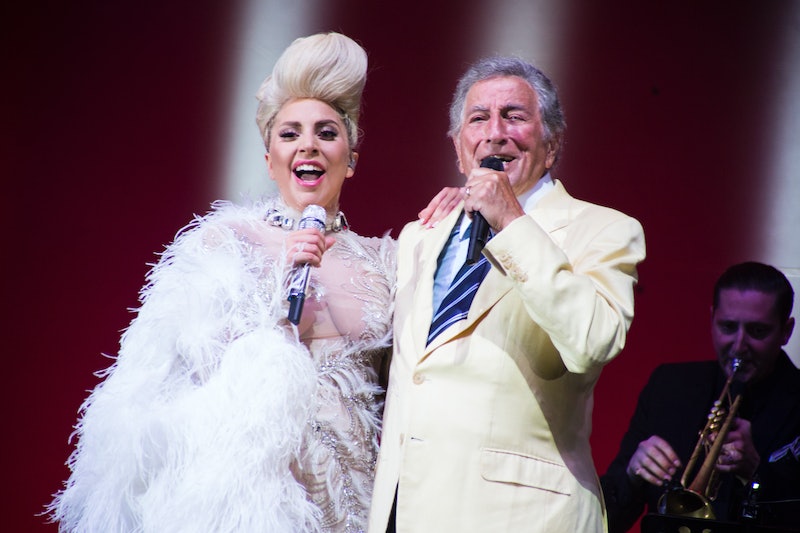 Lady Gaga and Tony Bennett have secretly been working on a follow-up to their 2014 Grammy-winning collaborative album Cheek to Cheek, and its release date is a lot sooner than expected. Lady Gaga's new album with Tony Bennett is now slated to be released in the spring due to some news about Tony Bennett's health. In an interview with AARP Magazine published on Monday, Feb. 1, Bennett's family revealed that he was diagnosed with Alzheimer's disease in 2016 and that his health has progressively worsened, particularly during the COVID-19 pandemic. There's a chance, they say, that this upcoming album will be the legendary jazz singer's last.

Bennett's wife Susan and eldest son Danny revealed that Gaga has known about his diagnosis since the beginning and decided to record a second album with Bennett while they still could. The album was recorded in "widely spaced sessions" between 2018 and early 2020, when Bennett was already showing "clear signs" of the disease, and Susan had concerns about whether he could handle it. "We'll try," she recalled telling Danny. "That's all I can tell you. We'll try."

In documentary footage of their recording sessions seen by the outlet, Bennett is described as "considerably more muted," which Gaga handles with nurture and care. When Gaga told her collaborator, “You sound so good, Tony,” he responded with a simple "Thanks." He was similarly unresponsive when she remarked how she thinks “all the time” about their 2015 tour. “Wasn't that fun every night?," she asked him, to which he simply said, "Yeah."

However, Bennett's family also said that he reverts back to the "old Tony" when he sings, something which Gaga was affected by while recording their new music. "The pain and sadness in Gaga's face is clear at such moments — but never more so than in an extraordinarily moving sequence in which Tony sings a solo passage of a love song," the article reads. "Gaga looks on, from behind her mic, her smile breaking into a quiver, her eyes brimming, before she puts her hands over her face and sobs."

The "Rain On Me" singer has previously called Bennett a father figure and mentor, saying his recognition of her talent was a turning point in her career. "The fact that Tony sees me as a natural-born jazz singer is still something that I haven't gotten over," she told the site. In a separate 2014 interview with Parade, she credited Bennett with saving her life. "I’m not going to say any names, but people get irrational when it comes to ­money," she said. "I was so sad. I couldn’t sleep. I felt dead. And then I spent a lot of time with Tony. He wanted nothing but my friendship and my voice."

The artists are so close that Danny called her for approval before going public with his father's diagnosis. "I wanted to check with her to make sure she was cool, because she watches his back all the time," he said. "She was like, 'Absolutely, it's just another gift that he can give to the world.'"

More like this
The Jonas Brothers' New Album Has A Very Meta Name
By Alyssa Lapid
Austin Butler Recalls Lisa Marie Presley Showing Him Elvis’ Bedroom
By Jake Viswanath
Linda Ronstadt’s “Long Long Time” Plays A Pivotal Role In The Last Of Us
By Brad Witter
Jameela Jamil Defends Sam Smith After Trolls Body-Shamed Them
By Jake Viswanath
Get Even More From Bustle — Sign Up For The Newsletter
From hair trends to relationship advice, our daily newsletter has everything you need to sound like a person who’s on TikTok, even if you aren’t.