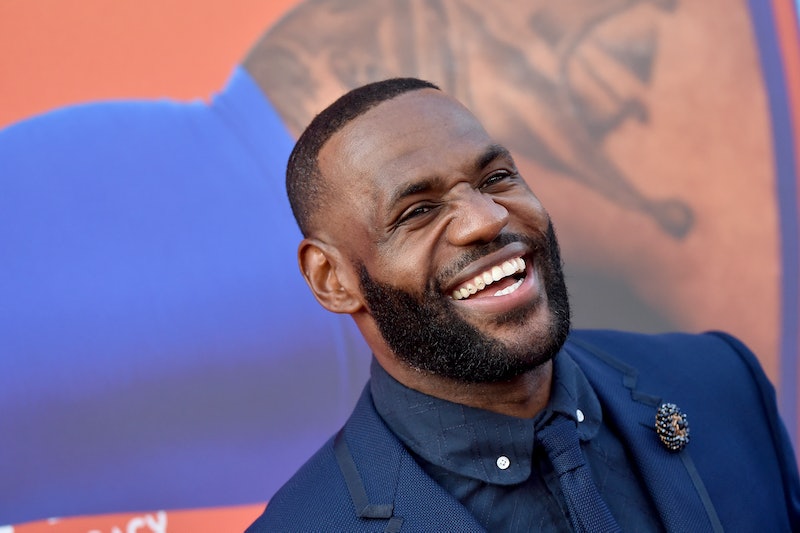 Without LeBron James, no list of the greatest basketball players of all time would be complete. In fact, in some ways, he’s the best ever, based on stats like how many points he’s scored, blocks he’s amassed, and so on. He is also one of the wealthiest athletes of all time. His riches come from more than just playing basketball, though. James has dabbled in the fashion world, invested in restaurants, and even appears in some of your favorite television shows and movies. So, when it comes to net worth, no other active athletes can come close to James.

The NBA star didn’t come from wealth — his mother struggled to support the family during his childhood. Thanks to some financial advice from his family, it appears James knew how to handle money from an early age. “My uncles always taught me — they taught me how to have a savings account,” James recalled in an UNINTERRUPTED podcast episode. “They’d give me a dollar and they’d be like, ‘Listen, nephew, go spend 35 cents of it and keep the other 65.’ Or, if they gave me two dollars, they’d be like, ‘Go ahead and spend a dollar of it, but stash the other dollar.’”

Read on to learn more about how James earned more than $1 billion and how he’s preparing himself for life after the NBA.

The moment he was drafted into the NBA straight out of high school, James’ life changed forever, and his net worth exploded. Throughout his career as a professional basketball player, which has now spanned nearly 20 years, he has earned more than $600 million on the court, and that’s not taking into account sales of merchandise bearing his name, number, or likeness.

Here’s a look at all the contracts James has signed and their value (according to Spotrac, which tracks contracts, salaries, and more in all major sports organizations).

James inked his first deal with Nike in 2003 when he was just 18 and only beginning his career. As per Forbes, it cost the shoemaker $90 million across a seven-year span, and it wasn’t the only offer he received at the time. Celebrity Net Worth reports that both Adidas and Reebok were also interested, and the latter company actually put up more money ($115 million), but the player opted to stick with a firm he wanted to work with for a long time to come.

In 2015, James re-signed with Nike, and he made history by doing so. The player inked a lifetime deal with the apparel conglomerate, which reportedly pays him tens of millions of dollars per year and which may eventually be worth $1 billion to him, according to his business partner. In 2019, Forbes reported that James had earned $32 million from his shoe deal with Nike in just the prior year alone.

Building off of his success in the shoe industry, James co-founded a store in Miami called UNKNWN. The location, which has its own basketball court, sells sneakers and apparel, including its own branded line.

James has made hundreds of millions of dollars on the basketball court, but he has also used his resources to invest in other sport-related ventures, which have increased his net worth over time.

In 2011, he invested $6.5 million to purchase a minority ownership stake in U.K.-based soccer team Liverpool FC. In just seven years, the basketball player’s down payment, which reportedly made him an owner of 2% of the brand, multiplied as the team became more and more successful. By 2018, it was estimated that his share was worth $45 million, per sports investment banking sources that spoke to ESPN.

In 2021, he transferred that 2% to a reported 1% ownership stake of Fenway Sports Group, which purchased the Liverpool-based soccer team. The conglomerate also owns the Boston Red Sox, Roush Fenway Racing, and the cable channel NESN. At the time, Forbes estimated that the group was worth $7.35 billion, making James’ small ownership stake worth at least $70 million. By 2022, FSG was reportedly worth nearly $10 billion, so the value of what he owns in the firm continues to climb, perhaps passing $90 million.

James teamed up with actor and former bodybuilder Arnold Schwarzenegger in 2018 to found a business called Ladder, which calls itself “a sports nutrition company dedicated to creating high-performance, NSF Certified for Sport® workout supplements for daily use.” Apparently, James was inspired to create the company after suffering from performance-related cramps. The two sold the firm to fitness tech platform Openfit in 2020, and Forbes reports that James may have earned as much as $28 million in stock for the trade.

Along with his friends Rich Paul, Maverick Carter, and Randy Mims, James co-founded the sports marketing company LRMR Marketing, which was created in one of the men’s mother’s kitchen. The firm has worked on marketing campaigns for a number of projects, perhaps most notably James’ primetime TV special called The Decision, which was all about him announcing he was leaving the Cleveland Cavaliers for the Miami Heat. It may have been poorly received, but the event did raise millions for charity, according to ESPN.

In 2010, when James was just beginning his tenure as one of the top players in the NBA, he signed a deal to promote McDonald’s. He expanded the partnership in 2012, and the Washington Post reports that he signed on for $4 million annually after that. In 2015, he terminated the deal, even though the fast food option offered him $15 million, according to Forbes.

Instead of sticking with McDonald’s, James decided to take a risk on Blaze Pizza, which at the time was still a fledgling restaurant chain. ESPN reports that in 2012, he invested $1 million in the company, for which he received a 10% stake in the brand. Now, his share could be worth between $35 million and $40 million, according to Bleacher Report. Forbes states in its article that he owns 17 regional franchise locations and that by the end of 2022, Blaze Pizza’s sales could pass $1 billion.

In November 2020, the Wall Street Journal reported that James continued his investments in the food industry with his first foray into the liquor business. For an untold sum, he became an angel investor in Lobos 1707, a tequila brand.

Part of the reason why James is worth so much money is that some of his deals with companies haven’t just been for large lump sums, but rather for “equity in brands he partners with, giving him a cut of the upside instead of a quick paycheck,” according to Forbes.

While that may be true, James has also signed on to be a spokesperson, perhaps earning many millions for his appearances at events, in ads, and in commercials for companies in a variety of industries. Throughout the years, he has been connected to brands like AT&T, Audemars Piguet, Baskin Robbins (and Dunkin Donuts in Asia), Calm, Candy Crush, Crypto.com, Hummer, Intel, Kia, Lyft, Microsoft, Mountain Dew, Powerade, Ruffles, Samsung, Sprite, State Farm, Taco Bell, Tonal, Uber, Walmart, and Wheaties.

James was also an early investor in Beats By Dre headphones, and at one point he owned 1% of the company. When Apple purchased the brand for $3 billion back in 2014, it appears he earned $30 million from the sale, according to Celebrity Net Worth. Some outlets place the amount he took home much, much loftier—perhaps as high as $700 million—though that figure hasn’t been confirmed.

In 2007, several firms connected to James combined to form the production company SpringHill Entertainment. Since then, the brand has been behind movies like What's My Name: Muhammad Ali, Space Jam: A New Legacy, House Party, and Hustle. On TV, the company has helped bring shows such as Survivor's Remorse, The Wall, The Shop, Shut Up and Dribble, Million Dollar Mile, and The Playbook to the small screen. In the past few years, SpringHill Entertainment has signed deals with major players in the industry, such as ABC and Warner Bros.

Forbes reports that in 2021, several investors poured money into the production company, which at the time claimed a valuation of $725 million. The firm may now be worth $300 million to James alone, the money magazine estimates. Included under the SpringHill Entertainment banner is Uninterrupted, an online media outlet aimed at players and their fans. According to the company’s website, its goal is to “inspire athletes and those in sports culture to be More Than through entertainment, product and apparel, social impact and events.” At one point, the firm received at least $15.8 million in funding, according to Mashable, though not much has been revealed publicly regarding the platform’s finances.

What Is LeBron James’ Net Worth?

Throughout his career, Forbes reports that James has earned $1.2 billion in pre-tax money, with upwards of $900 million of that coming from off-the-court activities. In 2021, the financial publication estimated his net worth to be $850 million, a sum which jumped at least $150 million in about a year to make him the second NBA player to become a billionaire, behind Michael Jordan. In 2022, Forbes ranked James as the second-highest-paid athlete in the world, with more than $121 million in earnings. That broke his own record for the most money earned by an NBA player in a single year, as he had upped it to $96.5 million the year prior.

More like this
David Beckham’s Controversial Qatar Deal Skyrocketed His Net Worth
By Catharina Cheung
What Is Pamela Anderson’s Net Worth? She Was Never Paid For Her Stolen Sex Tape
By Hugh McIntyre
Maya Jama’s Net Worth Definitely Won’t Give You The Ick
By Sophie McEvoy
Emily Atack’s Net Worth Would Make Charlotte Hinchcliffe Proud
By El Hunt
Get Even More From Bustle — Sign Up For The Newsletter
From hair trends to relationship advice, our daily newsletter has everything you need to sound like a person who’s on TikTok, even if you aren’t.