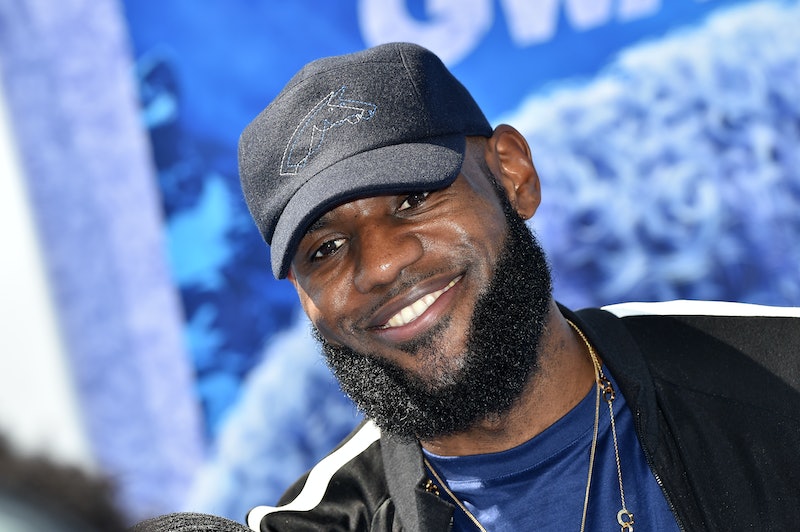 The NBA playoffs may currently be in full swing, but that isn't the only sports-related development to take place over these last few weeks. LeBron James revealed the new Space Jam 2 Tune Squad uniforms, which are just about as bright and colorful as you'd expect. The highly anticipated sequel, titled Space Jam: A New Legacy, will see the professional basketball player donning the brand new Tune Squad jersey, and fans will definitely want to buy one for themselves.

"Tune Squad coming soon!!" James captioned an Instagram post on Monday, Aug. 17, accompanied by a video that features the NBA star in his colorful, looney-tuney attire. "Glad all my @ljfamfoundation and @ipromiseschool families got to see it first. Thanks for holdin it down my brother @mavcarter #JustkidsfromAKRON."

In addition to starring in the film — which is slated to debut in theaters on July 16, 2021 — James also serves as co-producer alongside Black Panther's Ryan Coogler. "The Space Jam collaboration is so much more than just me and the Looney Tunes getting together and doing this movie," James told The Hollywood Reporter in 2018. "It's so much bigger. I'd just love for kids to understand how empowered they can feel and how empowered they can be if they don't just give up on their dreams. And I think Ryan did that for a lot of people."

Details about the upcoming project remain somewhat scarce apart from James' involvement and his inevitable run-in with Bugs Bunny & co., though it's sure to put the athlete's impressive court skills on full display, similar to what the film's predecessor did for Michael Jordan.

The original 1996 classic centered around Jordan as he struggled to adjust to his new post-basketball life. However, he is soon forced to come out of retirement after the Looney Tunes gang task him with helping them to defeat the Monstars in a high stakes basketball game that is quite literally out of this world. (It's not called Earth Jam for a reason, folks.)

Now the torch is being passed to James, who will presumably assist these beloved, animated characters in some new and exciting way. It's enough to make your '90s-lovin heart soar. However, not everyone is a fan of seeing a revival come to light. “I think it’s ridiculous to try and make a different movie out of it,” former Space Jam director Joe Pytka told Entertainment Weekly in 2016. “I can’t see it. I can’t imagine how it could be what that film was. Not that Space Jam is a great movie, but it had something that touched that period of time because of who those athletes were and it doesn’t exist anymore.”

Pytka may not agree with the decision to move forward with this project, but if these jerseys are any indication the success of this reboot is all but a guaranteed slam dunk.