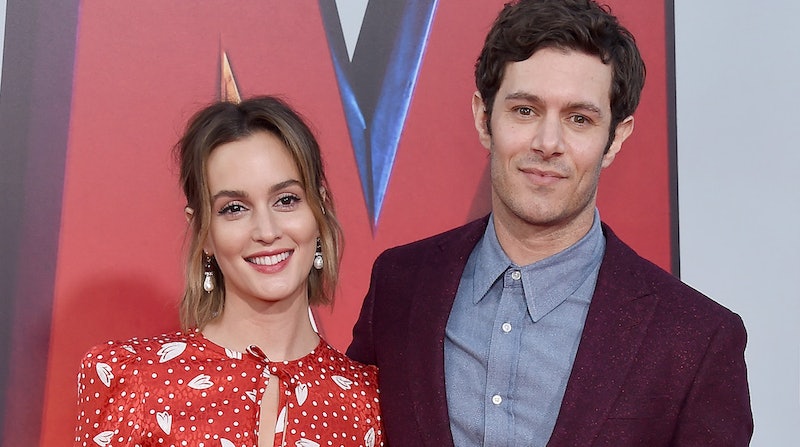 Our fave teen star couple now heads a family of four. Adam Brody and Leighton Meester have welcomed baby no. 2 together. Brody confirmed on online streaming platform Twitch last week during Hold the Phone TV's The Fun Time Boys Game Night Spectacular that he and Meester have welcomed a “dream boy.” There’s no word yet on the baby boy’s name and the exact date that he entered the world, but he now joins big sister Arlo Day, 5, whom the couple welcomed in 2015. Bustle has reached out to Brody and Meester’s reps for comment, but did not receive an immediate response.

"I have a new kid. Since last I played, I have a new kid," Brody said on the show. "I have a boy, and he's a dream. He's a dream boy." It comes after Meester’s baby bump was photographed for the first time back in March, when the Gossip Girl alum was out and about with Brody in Los Angeles. Brody and Meester, who met on the set of the 2011 romance drama film The Oranges, tied the knot in 2014. More so, Brody recently guest starred as Meester’s deadbeat ex-boyfriend on her ABC sitcom, Single Parents.

Meester and Brody have long been notoriously private about their relationship and their daughter. In an interview with Refinery29 in 2017, Meester cited the fact that “there's so much more to women” for the reason behind her decision to not speak publicly about Arlo. “I don’t talk about Arlo very much,” Meester said. “I am very proud of that area of my life. But I’m also really proud... of the work I do.” She continued, “I think the perception is: You’re an ingenue, or you’re an icon, or you’re a mom. There’s no in between.”

Brody, for his part, has also remained relatively private about his daughter, but he offered a glimpse of his life as a dad in an interview with PEOPLE in 2016. The O.C. alum revealed that he and Arlo love to go on morning hikes together. "I do a nice morning hike with my daughter; that’s always a treat," he said. "It’s something to do in the wee hours of the morning when she’s up. It’s a good activity for both of us." Congratulations are in order for Meester and Brody, who now has a second morning hike buddy.

More like this
'Bridgerton' Star Nicola Coughlan Confirms Season 3 Will Focus On Colin & Penelope
By Grace Wehniainen and Alyssa Lapid
Wait, Did Wanda Die In 'Doctor Strange And The Multiverse Of Madness'?
By Arya Roshanian
Elizabeth Olsen Is Better Off Without Us
By Chloe Foussianes
Sadly, You Can’t Stream 'Doctor Strange In The Multiverse Of Madness'... Yet
By Morgan Leigh Davies
Get Even More From Bustle — Sign Up For The Newsletter