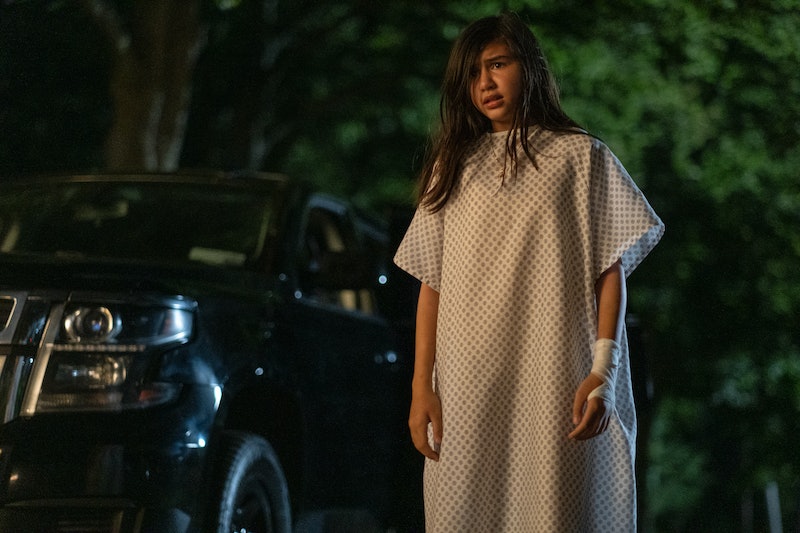 Inspired by the original Swedish novel and film, Showtime’s Let the Right One In sinks its teeth into the story of Mark Kane (Demián Bichir), whose daughter, Eleanor (Madison Taylor Baez), was turned into a vampire a decade ago. Because she was 12 years old at the time, that’s the same age Eleanor has remained, perhaps forever, allowing her only to venture out at nighttime. Meanwhile, Mark does whatever it takes — even committing murder — to provide his girl with the human blood she needs in order to survive, but can he ever really save Eleanor from herself? With the twisty Season 1 finale airing on Dec. 11, viewers are already rightfully wondering if Let the Right One In will return for Season 2.

Though Showtime has yet to renew or cancel the dramatic thriller, Let the Right One In creator and showrunner Andrew Hinderaker thinks the show has plenty of life left. “For me, it all funnels back to, what is at the heart of your show? . . . Emotionally, is there a beating heart that really holds the weight of 50, 60 or 70 hours of storytelling?” he explained to Collider in October. “For me, that parent-child relationship did. That question of how far Mark would go for his child, but also how far all the people in the show are going for the characters, the creatures, and the monsters they love.”

Citing the potential for “a treatment or a cure” for Eleanor’s blood lust, Hinderaker also noted the overall storyline is going to include many steps and obstacles. As he elaborated, “You have to kill people to feed your child. That felt, emotionally, like this is a story that not only can carry the weight of several seasons, but requires it, from a plot standpoint as well.”

In a separate interview with Syfy Wire the same month, the showrunner even mentioned that he was already “in [the] writers’ room for Season 2,” so though not yet official, another outing seems likely. Here’s everything else to know about a potential Let the Right One In return, as you await Showtime’s official announcement, either way.

Who Is In The Let The Right One In Season 2 Cast?

Speaking to Gold Derby in an interview published on Nov. 30, Hinderaker specifically shouted out the “remarkable” child actors, Baez and Foreman. “At 12 years old, it is a challenge because we shoot the show largely on location. A lot of nights, a lot of exterior, a lot of winter,” he shared. “To accomplish that and then to pull it off is entirely a tribute to them. And then they’re so good, you know? It’s really their relationship that is so central to the series and is really the heart of the source material and it’s imperative to honor that. I just can’t say enough about Madison and Ian. They’re both wonderful.”

What Is The Let The Right One In Season 2 Potential Premiere Date?

The supernatural drama was slated to go into production in New York City in early 2022, according to Variety, ahead of the series premiering in October. Depending on if and when Showtime officially green-lights Let The Right One In for Season 2, a Fall 2023 return is still a reasonable possibility.

This post will be updated as more Let the Right One In Season 2 details become available.

More like this
Everything To Know About 'Cobra Kai' Season 6
By Brad Witter
'The Crown' Season 6 Has Suspended Filming "Out Of Respect" For The Queen's Death
By Bustle Staff
Everything To Know About 'Selling The OC' Season 2
By Brad Witter
Netflix Shut Down 'Bridgerton' S3 Rumours About A “Very Dark” Storyline
By Bustle
Get Even More From Bustle — Sign Up For The Newsletter
From hair trends to relationship advice, our daily newsletter has everything you need to sound like a person who’s on TikTok, even if you aren’t.