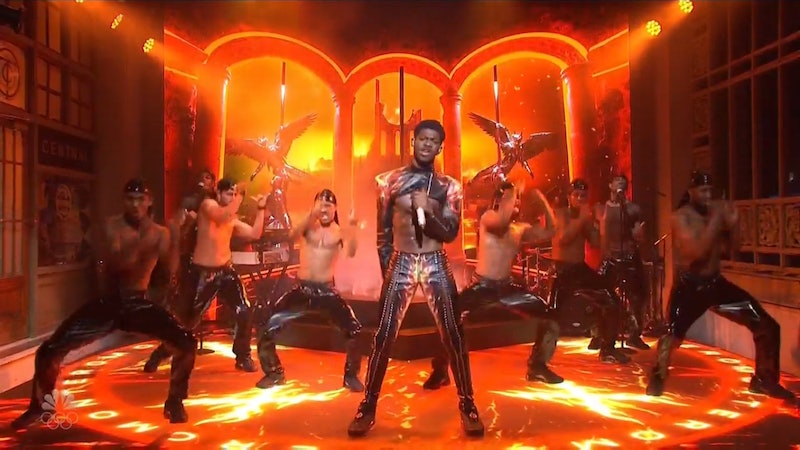 During Lil Nas X’s Saturday Night Live performance of “Montero (Call Me By Your Name),” the Grammy-winning singer brought all the sultry aesthetics of his iconic music video to the stage. In fact, he delivered even more than he intended: an apparent wardrobe malfunction. Toward the end of the song, after dropping to the floor as part of his pole routine, Lil Nas X’s pants ripped at the crotch, forcing him to quickly move to cover himself up in time to finish the number. (It is a live show, after all.)

Lil Nas X might have been disappointed he didn’t get to finish his pole routine, but the rapper was laughing the incident off by the next morning. On Sunday, May 23, the singer reacted to the pants-rip on TikTok, using a Siri voice to read “my pants really ripped on live television last night” and showing himself laughing.

With a ripped seam and unflinching smile, Lil Nas X turned an awkward clothing mistake into an instant-classic SNL moment. Viewers on Twitter clearly loved watching his highly anticipated SNL debut. One user, HelloSerah, said, “I can already tell I’m going to rewind @LilNasX SNL performance many times tonight.” Another, msnbarbie, tweeted praise to the singer for his lively routine, writing, “You are living your best life and I am so happy to see it.”

Another user, Cole Merkel, acknowledged the significance of Lil Nas X’s performance: “Having a hard time imagining Lil Nas X performing Call Me By Your Name with six shirtless men on @nbcsnl in any other decade. I’m in awe at how much gay culture has become accepted by the American mainstream in my adult life alone. Representation matters.”

Of course, the unforgettable rip occupied much of the conversation on Twitter.

Just moments after the performance, Lil Nas X took to Twitter himself to catch up with the conversation — but was rendered momentarily speechless.

“NOT MY PANTS RIPPED ON LIVE TV,” he wrote backstage. But no stranger to going viral, the ever-online singer had fun sharing in the meme game.

Soon after, he joked that “this is what I get” after wanting do his pole routine on the show. Though Lil Nas X’s wardrobe malfunction prevented him from finishing that part of the dance as planned, fans were quick to offer words of encouragement.

Even SNL alum Ana Gasteyer took the time to tweet some love at Lil Nas X — and recount her own wardrobe mix-up, too.

“Montero” was not Lil Nas X’s only song of the night, of course. In addition to a low-key performance of his new single, “Sun Goes Down,” the singer also made a surprise appearance in the “It’s Pride Again” music video, spoofing the ups and downs of a post-pandemic Pride celebration to the tune of Madonna’s “Holiday.”

Writer Danez Smith praised Lil Nas X’s work on the episode as “good and sexy as hell,” noting that the singer “did more than what had to be done.”

Several users pointed out how effortlessly Lil Nas X handled his range of material, from both the steamy “Montero” to the extremely personal “Sun Goes Down.”

This post has been updated with inclusion of Lil Nas X’s response to his SNL wardrobe malfunction.

More like this
Pedro Pascal Barely Got Through The "Lisa From Temecula" 'SNL' Sketch
By Stephanie Topacio Long
Michael B. Jordan Tackled His "Public Breakup" With Lori Harvey On 'SNL'
By Brad Witter
Who Is Pete Davidson Dating? He & Chase Sui Wonders Got Caught Kissing
By Jake Viswanath
All The Best Celebrity Reactions At The 2023 Grammys
By Brad Witter
Get Even More From Bustle — Sign Up For The Newsletter
From hair trends to relationship advice, our daily newsletter has everything you need to sound like a person who’s on TikTok, even if you aren’t.

This article was originally published on May 23, 2021