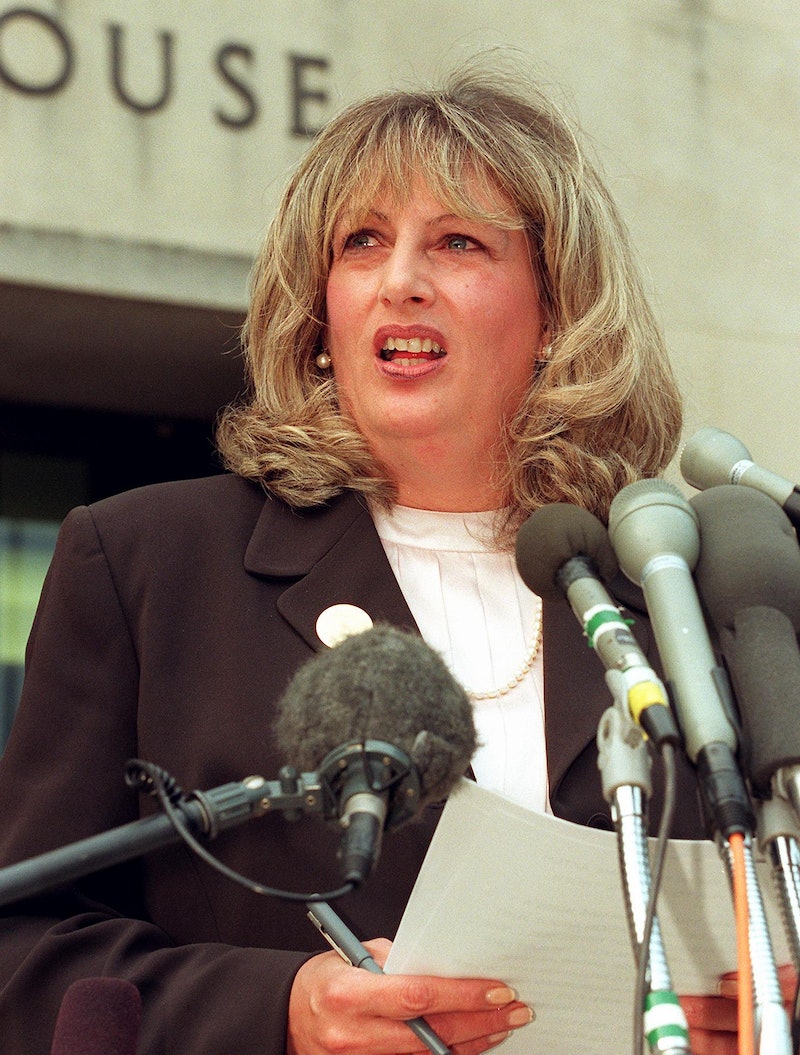 FX’s Impeachment: American Crime Story is as much a story of political scandal as it is one of betrayal between two friends. As is portrayed in the show, Monica Lewinsky (Beanie Feldstein) became quite close to Linda Tripp (Sarah Paulson) after meeting her in April 1996 while they were both working in the Pentagon’s Public Affairs Office. Eventually, she began confiding in Tripp about her affair with then-President Bill Clinton. “I felt so deflated, and so desperate,” Lewinsky shared in the 2018 docusieres The Clinton Affair. “And those were the conditions, along with some other things, that led to me confiding in Linda Tripp.”

Unbeknownst to Lewinsky, Tripp began illegally recording their frequent phone calls at the advice of conservative book agent Lucianne Goldberg. And in January 1998, she turned them over to special prosecutor Ken Starr — who was already investigating Clinton — in exchange for immunity from wiretapping charges.

While wearing a wire, Tripp met Lewinsky at a Washington, D.C., hotel, where FBI agents confronted the unsuspecting White House intern. When Lewinsky ultimately testified during Clinton’s 1998 impeachment trial, she said she was “really sorry for everything that’s happened,” before adding, “And I hate Linda Tripp.”

Tripp later downplayed the nature of their friendship, calling the idea that she was a mother figure to Lewinsky a “huge fallacy.” “It wasn't a friendship,” Tripp told Fox Nation in 2019, adding that she hadn’t met a “needier person” than Lewinsky in her entire life.

In the years since the scandal, Tripp has stood by her decision to reveal Lewinsky and Clinton’s relationship. During an address on Capitol Hill National Whistleblower Day in 2018, she said her only regret was “not having to guts to do it sooner.” However, she never attempted to explain why she made the choice to Lewinsky. “Even though I believed it was the right thing, I couldn’t face her, because I knew she would never in a million years understand,” Tripp said in an interview on Slate’s Slow Burn podcast the same year. “I kept holding on to thinking that had that been my daughter, I would want to have had someone stop it — kind of like ripping a Band-Aid off a wound. It has to be done. It’s not something you enjoy, but you do what you have to do. But there was no enjoyment in it. None.”

In April 2020, Tripp died from pancreatic cancer. Shortly before, Lewinsky put their differences aside to publicly wish her former friend well. “No matter the past, upon hearing that Linda Tripp is very seriously ill, I hope for her recovery,” Lewinsky tweeted on April 8. “I can’t imagine how difficult this is for her family.”

But she still clearly harbors a bit of a grudge. While answering Vanity Fair’s Proust Questionnaire in August 2021, Lewinsky listed compassion, wisdom, and wit among the qualities she most admires in her friends before throwing in a dig at Tripp: “Plus, call me crazy, but I’m also partial to friends who don’t surreptitiously record our calls.”

More like this
Two UK Cities Are Now In The Running To Host Eurovision 2023
By Sam Ramsden and Rachel Mantock
Jonathan Bailey’s BTS ‘Bridgerton’ Photos Celebrate 6 Months Of “Kanthony”
By Stephanie Topacio Long
'Grey's Anatomy's New Intern Got Advice From Dr. Bailey Herself
By Grace Wehniainen
Nicola Coughlan’s Description Of Meeting Olivia Colman Is Just So Nicola Coughlan
By Sam Ramsden
Get Even More From Bustle — Sign Up For The Newsletter