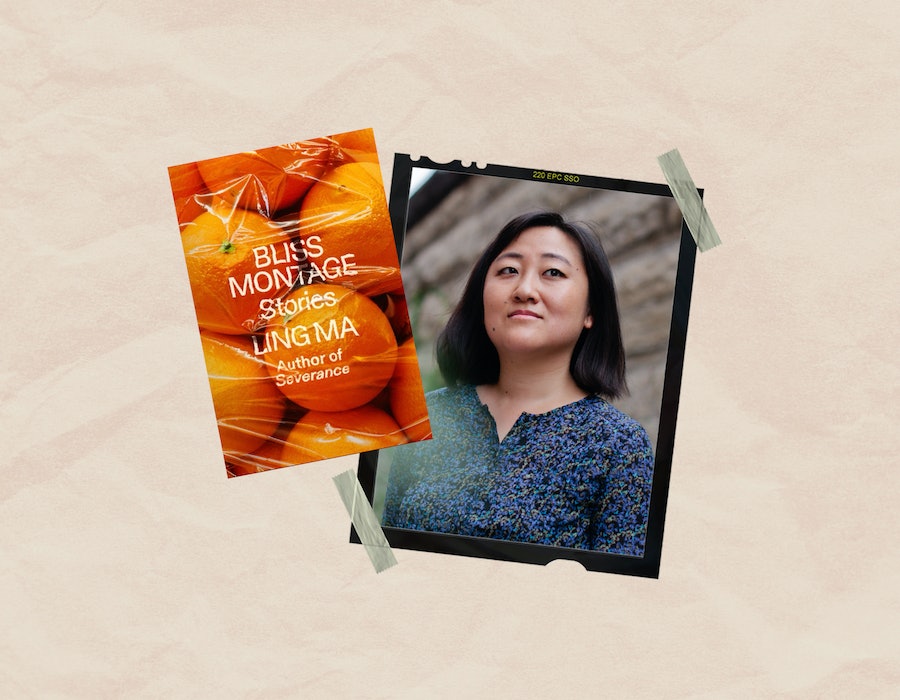 Ling Ma wants her writing to speak for itself, but the publishing industry doesn’t work that way. When a series of interviews and events are planned to promote her books, she feels like “an appendage” to her work. “[I’m] like the custodian or something,” the Chicago-based author and professor tells Bustle. “I’m just kind of walking it around, hoping it'll get out there. And then I don’t have to worry about it.” Ma has clearly ruminated on this alienation, as it’s made it into her new short-story collection, Bliss Montage. As the protagonist of one story narrates, “On the book promotion circuit, I felt like the executor of a modest estate, interpreting and acting upon the intentions of the deceased, reanimating her process of writing, retracing her thoughts, presenting publicly on her behalf.”

Still, her 2018 debut novel Severance took on a life of its own. The satire, about a millennial office worker struggling to find purpose in her work as the mysterious “Shen Fever” sweeps the world, earned the author the distinction of “pandemic prophet.” Though Severance was named a New York Times Notable Book and a New Yorker best book of the year, among many other accolades, it wasn’t until the early months of COVID-19 that the book reached a widespread, commercial readership. “I certainly don't consider myself clairvoyant, but I think when people started trying to process what they were doing in their day-to-day work lives, and trying to reconcile that with global catastrophe, that's when I thought, ‘this book is going to resonate,’” Ma says.

All the public attention pushed Ma further into writing mode, and she turned to her dreams for inspiration. “I feel like with my writing process, I'm trying to get out of my own way,” she says. “My subconscious is a million times smarter than I am.” The resulting collection, Bliss Montage, conjures up plenty of surreal concepts, from an LA McMansion where a woman’s 100 ex-boyfriends live with her family, to an invisibility drug that reveals the fractures in teenage friendship, to a love triangle between authors that culminates in a quietly sinister “morning” ritual. Like the book’s cover, which warps the title across a crinkly plastic bag, the stories are deliciously glitchy, reveling in the phantasmagoria of feeling out of step with your time, your body, your life.

Here, Ma discusses her creative process, deciding to become a writer, and how working at Playboy inspired the story “Yeti Lovemaking.”

As I was reading Bliss Montage, I thought to myself, “if Severance predicted the pandemic, which of these stories will come true next?”

Those [stories] are more in the terrain of dreams. I went deeper into the subconscious with Bliss Montage, and that was in part because I wrote many of the stories during the pandemic. I went into hibernation because Severance was seeing so much press — I got kind of shy.

How do you process source material from your dreams? Do you keep a notebook by your bed?

I don't have a dream journal or anything like that. Often, they were dreams from years ago. I occasionally jot down some dreams, but I'm not exactly fastidious about it. I can't say the stories are faithful to any of the dreams, except for in mood and feeling.

Do you have a writing routine now, or does inspiration come to you in bursts?

I know what an ideal writing routine is, and I did that throughout the pandemic. It got a little bit lonely, and a little bit maybe too severe towards the end, but it was a two-shift process. One writing shift in the morning, one writing shift in the afternoon. Morning is drafting, afternoon is editing and rewriting what I worked on in the morning. I really liked that. But I also think I did too much of that during the pandemic. It was starting to feel a little unhealthy.

My writing process is dribs and drabs now. I’ve been out of town a lot the past month. Also, I have a kid now. So that’s reoriented me a little bit.

When did you first realize that you wanted to be a writer?

I didn’t have any clear moment of realization. As a kid, I wanted to be a book reviewer. In college, I thought I would be an archaeologist, but then I found anthropology as a field to be extremely problematic. So I ended up in English, partly because the Chicago winters are long and you could stay in bed all day reading Henry James.

I’d always been writing fiction while doing other things. But it was something that I was afraid to take ownership of for a long time. I worked in fields that were adjacent to writing fiction — media and book production and publishing. But I never sat down to write a novel until the Playboy office was closing and relocating to LA in 2012, and I didn't have another job lined up. I just worked on Severance.

During the early months of the pandemic, some of the most urgent discourse on Twitter was related to navigating widespread catastrophe amid late capitalism. What made you start thinking about those ideas so many years earlier?

Right after college, I worked a series of office jobs. One of them was similar to what Candice worked in Severance, although it wasn't totally the same. But I did get a chance to visit suppliers and printers in Asia and glimpse parts of the supply chain. [At another job,] I noticed there would be extreme weather events and we would still be expected to come to work. There was this giant snowstorm in Chicago, snow as high as parking meters and I was trying to grapple with the idea of: “Wait, the subway is down, but I still have to go to work?” I don't have a car. There are no cab drivers. Does that mean I just walk for five miles? Just thinking about reconciling reality with the demands of capitalism, I thought, “What if every day is a catastrophe?” By taking that idea and amplifying it a little more, that’s part of how Severance came into being.

Your author bio says that you're “from Fujian, Utah, and Kansas.” How do you think that each of these places has shaped your perspective?

Speaking more broadly, I haven't lived in any one place for a very long period of time, save for Chicago. I do feel in general that I've gotten a cross-section view of America, having lived in various places not just as a kid, but as an adult. And in my working life, I’ve worked in so many places. I feel very much like an authorial eye taking it all in.

You mentioned you worked in media. What are some of the other editorial jobs you’ve had?

I used to oversee the book section for an indie, feminist music zine called Venus Zine. It was placed with Bust and Bitch on the newsstands in the mid-aughts. During those years, there were three big indie magazines coming out of Chicago: Punk Planet, Stop Smiling, and Venus Zine. I would interview authors and ask them about the specific book. I remember Alice Sebold once told me that she wasn’t good at writing when she lived in New York. She was good at being a New Yorker, someone who was always out and about, but she couldn’t really write until she got out of there. I also remember talking to Karen Russell — I was very inspired by a lot of what she said. In my own fiction, I started veering off in a more sort of fantastical direction after [reading] her first book, St. Lucy’s Home for Girls Raised by Wolves.

At Playboy I did fact-checking. And sometimes I wrote [centerfold stories, called] “girl copy.”

I can’t decide if men’s magazines are a product of attitudes towards masculinity at a given time, or a think tank where masculine aesthetics are developed in a test tube. I’m curious how working in that environment — and thinking about that kind of content — informed the sexual politics of these stories.

If anything, I was surprised by the disparity between the masculine ideal [we were trying to project] and the people I actually worked around. “Yeti Lovemaking” I did actually write while I was at Playboy. I wrote it before Severance. I was thinking about some archetypes of masculinity, because we would do these fashion spreads on what to buy if you want to look like Steve McQueen or Cary Grant, and year-in-year-out, I realized they were these same touchstones. And I thought, what happens when you push that sort of masculine ideal to the extreme? So I started thinking about Sasquatch, and yetis.

Apparently there was some drama in the Bigfoot forums recently? Someone made a splash in a Facebook group for people interested in Bigfoot, claiming he’s seen 50 Sasquatches. Do you know about this?

No, but I love that you know this.

'Bliss Montage' by Ling Ma
Amazon
More like this
Taffy Brodesser-Akner Can Write Anywhere — Even The Bathroom At Bloomingdale’s
By Samantha Leach
The Indigo Girls Taught Me Queer Relationships Could Be Messy, Too
By Hannah Soyer
Marcus Mumford, Open Book
By Ilana Kaplan
At 28, Prue Leith Was In A Secret Affair & Sharing Apple Pie With Stoned Neighbors
By Grace Wehniainen
Get Even More From Bustle — Sign Up For The Newsletter