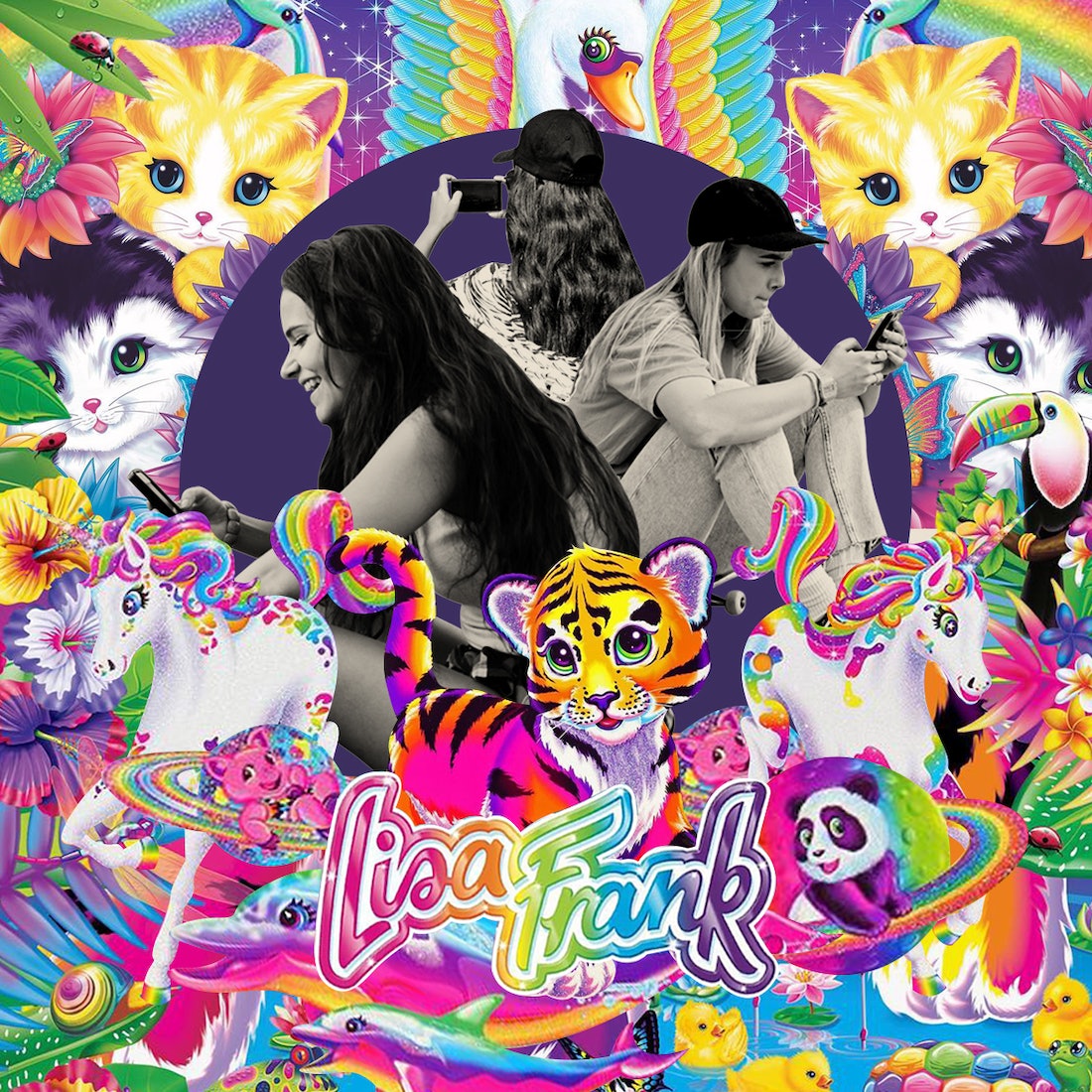 Before all this, Lisa Frank attended a JoJo Siwa concert, where she was seated next to North West’s crew. In a stadium full of young girls like the Kimye spawn, styled in the technicolor image of the teen YouTube phenomenon on stage, the woman who originated Siwa’s Rainbow Brite aesthetic was hiding in plain sight. Until she was introduced to West’s chaperone, Chief Marketing Officer of Kardashian West brands Tracy Romulus. “Her eyes lit up,” recalls Frank’s son and plus-one, Forrest Green, 21. “[Romulus] flipped out and was like, ‘Can I take a picture with you?’” Frank politely denied the request, while Green gifted Lisa Frank stickers to the 7-year-old West and her pals. It’s a rite they’ve performed countless times before. “It’s almost like [my mom is] a mythical character.””

Frank, founder of the electric Kool-Aid-esque school supplies empire, is notoriously private. There are scarcely any photos online of the woman known to fans as the Queen of Color, and in my reporting, the most I could gather of her appearance is that she “looks like someone who reads fortunes on a boardwalk but in a classy and expensive way.” Between Frank’s hard fought anonymity and the quiet that followed the company’s discontinuation of in-house production in the early 2000s, it would be easy to think that Frank and her brand are more of a catchall descriptor for ’90s kid nostalgia than an actual person, let alone an actively working CEO. Which made Lisa Frank’s masterful foray into Instagram two years ago — posting Father’s Day tributes to the childless John Mayer, complimenting Khalid on his “fit,” and gridding throwbacks from Mila Kunis’ days as a child model for the brand — all the more surprising.

But Frank had Green, then a 19-year-old student at UCLA, by her side. “I was just like, ‘Let me [run our Instagram account] for a week without hearing anything from our peanut gallery,’” he says playfully from his home in Tucson, Arizona. (He’s been quarantined there with his mother ever since the pandemic hit, and during our series of calls this summer, the two were cohabitating and working together in tandem.) “Then we gained 10,000 followers that week. The next we gained 20,000, and we were off and running.” Under Green’s tutelage, the Lisa Frank brand has grown… thirstier. Now with 805,000 followers, Lisa Frank’s rainbow-emoji-laden exchanges with Diplo and Chrissy Teigen are chronicled by Instagram paparazzi Comments by Celebs, and the brand is rolling out zeitgeisty collaborations with Gen Z titans like a Lisa Frank filter modeled by Addison Rae and a Frankified Paper cover with K-pop band BTS. In November, they launched Morphe x Lisa Frank, an eyeshadow palette decked out with baby tigers, aliens, and unicorns.

“One time when I was probably 8 or 9, I closed the meeting like, ‘All right, guys, this was awesome; what are the next steps?’”

And now Green serves as the company’s director of business development and partnerships — working to commodify its cult following by offering fans new yet nostalgic products. Or to hear him tell it, help reintroduce Lisa Frank Inc. to the market as a modern lifestyle brand. This is far from Green’s first brush with the family business. He assumed a formal position at the company in 2015 (“I’ve had phone calls with Google in a communal bathroom at UCLA,” the recent grad says of balancing his studies with his duties at LFI), but his work really began back when he was just 6 years old, amid a major reckoning at the company.

At LFI’s peak in the late ’90s, the company was making more than $60 million in sales from its trapper keepers, hoodies, and stickers, according to court documents. But by 2004, that number was slashed in half. “My parents got divorced; that’s what [happened],” Green says of the business’s decline. During Green’s parents’ marriage, his father James Green was named the CEO and president of LFI. Frank relinquished day-to-day management duties to her husband and executive vice president Rhonda Rowlette — along with granting her husband 49% of the shareholdings — while she mostly stayed home to raise their children, Forrest and his brother, Hunter. The elder Green’s reign at the company was a controversial one. In 2005, 16 people who had worked with the Tucson-based business in various capacities signed sworn affidavits in a lawsuit filed against James Green alleging the environment under James Green as “hostile” and a culture of “intimidation and insecurity," according to a Jezebel report. (In 2007 the court terminated Green's status as a director of LFI.)

Then in the summer of 2005, the couple separated, ushering in the many lawsuits it would take for Frank to regain full control of her company. Frank spent the latter half of the aughts embroiled in bitter litigation against her husband over everything from his shares in the business to the sale of a private jet and family photographs. “I’d be lying to you to say that it hasn’t affected me. ... Even though we’re private, it was public. So it wasn’t easy,” Green says. “We were going through a transition and there were a lot of things that we were learning together, me and my mom, from my early age. That’s why this is so personal. We’ve been through it.”

Once Frank went back to work, Green no longer had playdates — he took meetings. Frank would excuse her son from grade school (“she was comfortable taking me out of the classroom because I was excelling,” he explains) to sit in on all the happenings at LFI’s 300,000-square-foot, rainbow-painted, pastel hearts emblazoned factory. Green sat next to his mother at the head of the table. “One time when I was probably 8 or 9, I closed the meeting like, ‘All right, guys, this was awesome; what are the next steps?’” he remembers. “The licensing agent at the time looked at me and said, ‘Well, I guess Forrest closed the meeting!’”

“His mother allowed him to be a part of the conversation,” says Ben Ferguson, CEO of Bendon Publishing, which has a longtime partnership with LFI. “I think that’s really unique. Most people would encourage the 14-year-old child to maybe stand down and let the grownups talk.” Frank not only encouraged her son to speak up, she let him be heard — including when he disagrees with her. “My mom has allowed me to combat her time and time again, from a [young] age,” Green says. “I always thought I was right [about the business]. I would always fight for my opinion and try to prove it to my mom.” (Notoriously press shy, in response to our outreach about her son's role in the company, Frank said, through a spokesperson, that she is very proud of her son.)

Green’s friend Ciana Cronin fondly recalls breakfasts with Frank and Green at a deli in Los Angeles when Frank would visit her son during his college tenure. She’d watch them switch back and forth, doting mother and son in one breath, fiercely devoted business partners the next. “There is less of a delineation between personal life and work life because [the company] is their everything; their identity is work,” she says. “Forrest to some extent has a managerial capacity for his mother. He’s not just a son, but also a manager for her.” The dynamic between a single mother and a child — despite having an older brother, who has no involvement with the business, Green says he has been effectively an only child since he was 8 — is fraught enough without additional professional baggage. “Did my mom ever hurt my feelings during it all? Absolutely. Did I ever hurt her feelings? Absolutely. We’re human, and when there’s that much pressure, that much stress, it’s tough,” Green says.

Being his mother’s confidant exposed Green to the world of celebrity. For stars with an eye for exuberance, meeting the enigmatic Frank is something of a bucket-list item. Green says that Kacey Musgraves and her sister once spent a few days in Tucson with Frank and Green touring the warehouse, going out for dinners, and eventually convincing Green to launch an Instagram account for the brand. Diplo recently slid into the Lisa Frank account’s DMs to say that he too had made an ill-fated pilgrimage to Tucson to meet Frank several years ago. (“I assume that he’s not lying, obviously. We didn’t meet him, so I don’t know,” says Green. He later encountered Diplo at a party, but says the DJ was flanked by too many girls for Green to get to the bottom of the story.) Lately, the pair have grown close to Tiffany Haddish, a “super fan” of Frank’s.

“This is how much of a fan I was: I didn’t have the money to buy her folders, so I would steal them,” says Haddish. When the comedian made it big, she reached out to Frank’s team in the hopes of meeting her childhood hero. Eventually, Haddish and Frank “had lunch at this really nice restaurant by the beach in Santa Monica.” “We’re sitting there talking about gardening and how I was going to pay for lunch because I stole her notebook.” Frank FaceTimed Green in. “I kept telling him how lucky he was. I’m basically flirting [with him] because if Lisa could be my mom, that would be the coolest.” LFI and Haddish are in talks about a number of potential partnerships. Haddish is into the idea of a toiletry kit to give to children in foster care, an extension of her charitable work donating suitcases to foster children. Down the line she hopes to work with them on creating a Black unicorn. “Something that would inspire young Black girls because we never see anything that looks like us, especially in that fairytale world,” Haddish says.

"People don’t even know who we are at this point. Lisa Frank is a lifestyle and it needs to be treated as such.”

According to UTA agent and longtime LFI collaborator Sid Kaufman, what Green brings to the future of the family business is a willingness to turn name recognition into relationships. “He’s fearless in networking his followers. A person could have a lot of followers, but how do you build on that with a network of people who love your brand and have a big network in their own right?” he says. When asked about the brand’s next iteration, Green’s wheels begin spinning so fast they run the risk of offroading. “There’s just so much possibility. More than just people saying, ‘Make some folders again, make some stickers again,’” he says. “That’s definitely part of the plan, but it’s like people don’t even know who we are at this point. Lisa Frank is a lifestyle and it needs to be treated as such.”

In 2020, the combination of evangelical fans and a well-engaged community is a tried and true formula for lifestyle success — see celebrity brands like Yeezy and brand celebrities like the frequent Yeezy collaborator Virgil Abloh, the latter of which is on Green’s moodboard. But this formula flies in the face of the DNA of the Lisa Frank brand, the name of which, thanks to Frank’s privacy, evokes images of psychedelic dolphins, dalmatians with multicolored spots, and pandas in overalls — not a charismatic CEO. So is Green ready to become the brand’s entrepreneurial avatar?

“I don’t necessarily envision myself becoming a celebrity,” he says. “From a business standpoint, I don’t feel like I have the ability.” If his mother were to go public, he explains, that would be one thing. But as for Green, he’s happy to keep one foot in the school of Lisa Frank, where mystery fuels fantasy. In lieu of a recent photograph to accompany this story, Green asked Bustle to publish an image of a baby tiger that his mother created to represent him. “I don’t necessarily think there’s that type of intrigue. Maybe there is, maybe I’m wrong.”