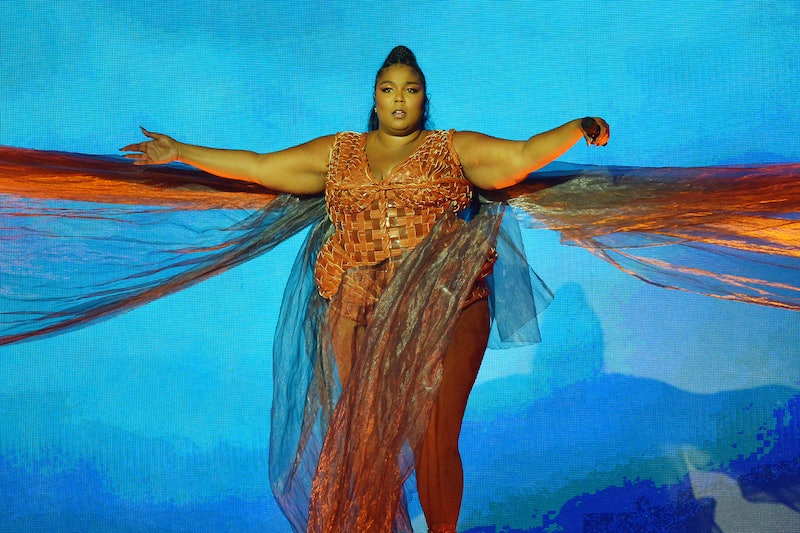 Lizzo has done a great deal to celebrate and empower women of all sizes, but it turns out that the singer doesn't fully identify with the idea of "body positivity." While speaking about the movement with Vogue for their October cover story, Lizzo said that "body positivity" doesn't go far enough to "normalize" all bodies, and she wants to keep working to make sure the world is as inclusive as possible, and that means prioritizing those left out. Part of her issue with "body positivity," the singer explained, is that it has become "appropriated" and "commercialized," and thus become more mainstream and exclusive to those it was started by in the first place.

"Now, you look at the hashtag ‘body positive,’ and you see smaller-framed girls, curvier girls," she told the outlet, noting that despite the movement being founded by women of color, there are a "lotta white girls," taking over the hashtag. "And I feel no ways about that, because inclusivity is what my message is always about. I’m glad that this conversation is being included in the mainstream narrative. [But] what I don’t like is how the people that this term was created for are not benefiting from it."

She continued, noting that she feels the movement ignores "girls with back fat, girls with bellies that hang, girls with thighs that aren’t separated, that overlap. Girls with stretch marks." Essentially, she said, the term has come to exclude women who are "in the 18-plus club," adding, "They need to be benefiting from ... the mainstream effect of body positivity now. But with everything that goes mainstream, it gets changed. It gets — you know, it gets made acceptable."

So, instead of identifying as "body-positive," Lizzo explained that she prefers to think of herself as "body-normative," because the term better describes her ultimate goals. "I think it’s lazy for me to just say I’m body positive at this point," she explained. "It’s easy. I would like to be body-normative. I want to normalize my body. And not just be like, ‘Ooh, look at this cool movement. Being fat is body positive.’ No, being fat is normal. I think now, I owe it to the people who started this to not just stop here."

Lizzo has often spoken about her relationship with the body positivity movement; in March 2019, she told Allure that she wasn't trying to be a part of a "movement," but rather just being herself in the public eye. "The body-positive movement is the body-positive movement, and we high five. We're parallel," the singer said at the time. "But my movement is my movement. ... And if that’s body positive to you, amen. That’s feminist to you, amen. If that’s pro-black to you, amen. Because ma’am, I’m all of those things."

She echoed those sentiments in a January 2020 interview with Rolling Stone, where she touched on the ways that her relationship to her body has changed over the years. "I’ve come to terms with body dysmorphia and evolved,” Lizzo said, adding that she wrote her 2015 single "My Skin" as a reflection of that journey. "The body-positive movement is doing the same thing. We’re growing together, and it’s growing pains, but I’m just glad that I’m attached to something so organic and alive."

However, later in the interview, Lizzo did note that she doesn't always want the focus to be on her body. "I’m so much more than that," she said, explaining that she hopes people will remember her for her music. "Because I actually present that, I have a whole career. It’s not a trend.”

More like this
Jameela Jamil Defends Sam Smith After Trolls Body-Shamed Them
By Jake Viswanath
Austin Butler Recalls Lisa Marie Presley Showing Him Elvis’ Bedroom
By Jake Viswanath
Linda Ronstadt’s “Long Long Time” Plays A Pivotal Role In The Last Of Us
By Brad Witter
The Jonas Brothers' New Album Has A Very Meta Name
By Alyssa Lapid
Get Even More From Bustle — Sign Up For The Newsletter
From hair trends to relationship advice, our daily newsletter has everything you need to sound like a person who’s on TikTok, even if you aren’t.