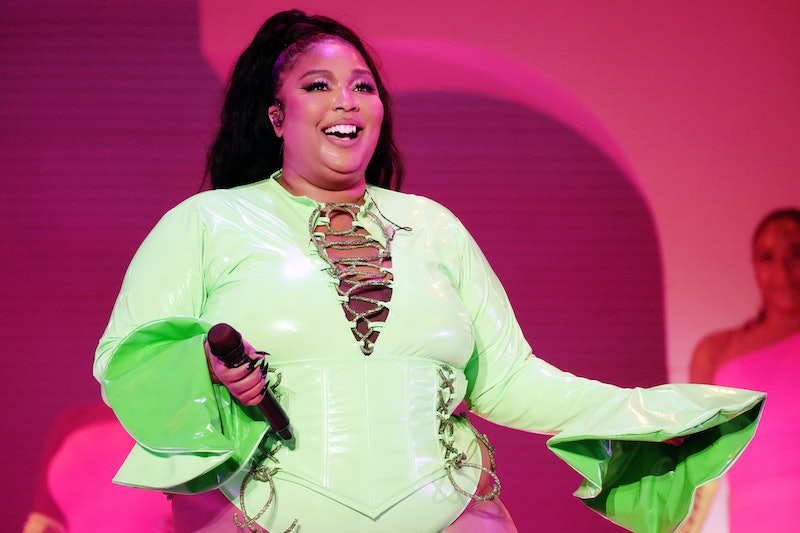 Lizzo and Harry Styles have a history of showing their mutual appreciation for one another, and that only continued during the former One Direction member’s Love on Tour stop in Los Angeles on Friday, Nov. 19. As a member of the audience, Lizzo marked the occasion with a well-planned “Hizzo” outfit. Her shirt featured photos of herself and Styles enclosed in a heart, along with the words, “These are my parents. No wonder why I’m so hot!”

The “Rumors” singer was kind enough to give fans a closer look at her ensemble when she posted a carousel of photos to Instagram the next day that was specifically dedicated to it. “Harry Styles was incredible & so is my outfit,” she wrote alongside a zany face emoji. The shirt, in all its glory, stood out not just for its graphic but also its embellishments, including a row of safety pins down each sleeve.

Lizzo’s outfit was very much a hit amid her many social media posts about the show. Her fans and followers gushed about it in their replies, like the Instagram user who wrote, “I need that fit!!!” On Twitter, one person wrote, “TELL ME YOU GOT HIM THE SAME SHIRT AS YOU PLS.” Another tweeted, “but where can i get that shirt,” while yet another wrote, “GIRL DROP THE SHIRT LINK.”

It’s unclear whether or not Styles happened to notice the top, but he definitely saw Lizzo in the crowd. In a video she shared from the Instagram user pressedpapershop, Styles made his way around the stage to throw a flower to her. “HARRY THREW ME A SUNFLOWER AND I FREAKIN CAUGHT IT,” Lizzo tweeted.

The three-time Grammy winner also summed up the whole night in an Instagram story, posting video of Styles dancing on stage with the words, “Was too lit to film anything else.” Part of the reason for that may have been her encounter with most of BTS — or her “besties,” as she put it. She and the K-pop superstars met, posed together for photos, and sang along with Styles and the rest of the crowd. Their interactions led to Lizzo’s name trending on Twitter, further adding to her excitement. She screenshotted her name at the top of the United States trends for an Instagram story and added, “Screaming.”

It was obviously a great night for Lizzo — and understandably so. It was good for fans in a lot of ways, too, but some couldn’t help but feel some FOMO. “all the people who paid for a harry styles ticket but got to see 4/7 members of bts and lizzo… how does it feel to be the chosen ones,” one person tweeted. Alas.

More like this
Cruz Beckham Teased New Music With An Adorable Nod To Mom Victoria Beckham
By Stephanie Topacio Long
Harry Styles Just Split His Pants In Jennifer Aniston’s Face
By Sam Ramsden
'Bachelorette' Vet Clare Crawley Unveiled 2 Special Wedding Day Accessories
By Stephanie Topacio Long
Will Beyoncé Perform At Or Attend The 2023 Grammys?
By Jake Viswanath
Get Even More From Bustle — Sign Up For The Newsletter
From hair trends to relationship advice, our daily newsletter has everything you need to sound like a person who’s on TikTok, even if you aren’t.