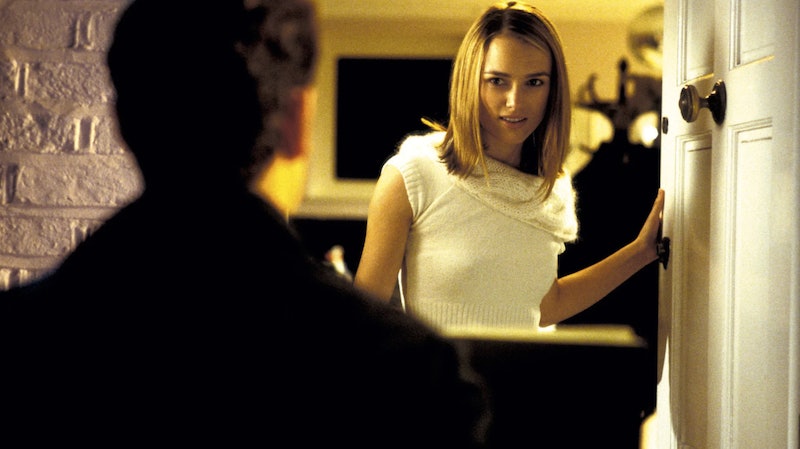 Almost twenty years since it was first released, Love Actually still remains a top tier Christmas film. Many have watched the romantic comedy enough times to be able to recite the gushy messages on those placards, however, few know Love Actually originally featured two deleted scenes — one featuring an older lesbian couple, and the other a man and woman in Africa.

From the sounds of it, one of the axed scenes would have been pretty heartbreaking. Remember the headmistress at the school played by Anne Reid? Love Actually planned to show an intimate scene with her terminally ill partner Geraldine (Frances de la Tour).

The tender moment between the couple takes place at home where they laugh about "fancy" Christmas sausages. They are also seen curled up in bed, as Geraldine coughs painfully. In a truly sad moment, it's announced that Geraldine dies before Christmas.

In DVD bonus footage, director Richard Curtis admitted he was "really sorry" to lose this part of the film.

“The idea was meant to be that you just casually meet this very stern headmistress," he explained, "but later on in the film we suddenly fell in with her and you realise that, no matter how unlikely it seems, any character you come across in life has their own complicated tale of love.”

The 2003 classic weaves between the lives and relationships of couples in London — however, another of the axed scenes would have taken all the way to Kenya. Per Grazia, the plot originally featured a man and woman who had survived famine, and the intention of emphasising the fact that love, actually, 'is all around."

It's hard to say if the scenes would have changed Love Actually for the better but they would have made the film a little more diverse. You can watch the scene on Youtube and decide for yourself — shall we petition for a new edit?

More like this
22 Movies On Netflix That Are Perfect For The Whole Family
By Bustle Editors
Jennifer Coolidge Got A Lot Of “Action” Thanks To 'American Pie'
By Catharina Cheung
At 28, Lesley Manville Was Acting, Picketing, & Singing Kate Bush Songs
By Olivia-Anne Cleary
'Scream’s Courteney Cox Has Broken A Major Horror Record
By Sophie McEvoy
Get The Very Best Of Bustle/UK