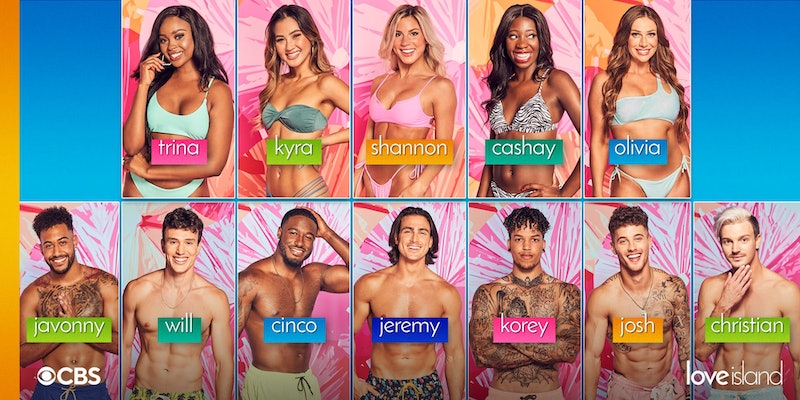 So far, the success rate for Love Island US couples has been egregiously low. But host Arielle Vandenberg still has hope for Season 3’s 12 new islanders. “Watching people fall in love is the most special thing ever,” she told Entertainment Tonight in June. “I mean, I love love. I'm always like, ‘Do you love him? Do you love her?’ I'm constantly in people’s ears trying to get people to fall in love.”

Among those she’ll be rooting for in Season 3 are a COVID relief worker, college athlete, and “budtender.” But viewers will get to see more than the cast’s romances unfold; all season long, CBS’ streaming service Paramount+ will be airing bonus footage deemed “too hot for broadcast.” “As the seasons go on, we like to push the limits...which is so exciting because I want [to see] the extra steamy content that doesn't make it,” Vandenberg told ET. “It’s gonna get sexy for sure.”

Love Island narrator Matthew Hoffman agreed, adding that on a scale from one to 10, the level of spice will be at a 25.

Here’s everything you need to know about the Season 3 islanders before watching their relationships develop — and heat up — onscreen.

The self-described “Alaska girl in the desert” uses her Instagram bio to highlight her love for God, health and fitness, and tattooing faces. Her posts also make clear that she’s just as comfortable hiking and going topless in the Alaskan wilderness as she is by a pool or on a beach.

Kyra is a 23-year-old Covid relief worker who seems to spend most of her downtime in a bikini. Though CBS lists Honolulu — near where Love Island is filming — as Kyra’s current city, her Instagram bio states that she’s currently living in Los Angeles.

A 25-year-old waitress from Brooklyn, Cashay also works as a model and dancer. “Find me on a dance floor near you,” she writes in her Instagram bio. In addition to her many modeling shots, she also uses her social media platform to support the Black Lives Matter movement.

The 24-year-old construction company controller and former cheerleader’s Instagram is filled with bikini photos in Miami, Mexico, and, yes, even the Bucks County, Pennsylvania snow.

Korey works as a rental car agent in Virginia Beach, but he’s more likely to be posing on a motorcycle (and showing off his many tattoos) on Instagram. “Happiness is a slurpee.. and me on my bike,” the 28-year-old captioned a May picture. His life philosophy? “Life’s short, take the risk or lose the chance.”

Josh’s Instagram primarily highlights his career as a college baseball player at Southern New Hampshire University. After clinching a second College World Series, the 24-year-old Haverhill, Massachusetts native noted that he couldn’t have done it without his parents. “Your unwavering support and constant selflessness throughout my baseball career was something I had only dreamt of,” he captioned a June 13 photo in his Penmen baseball uniform. “I do not know where the next chapter of my life will take me, but I do know it will be bright because I have you two.”

As you might expect of a personal trainer and fitness model, Jeremy’s page is full of shirtless workout photos. The 27-year-old New Yorker’s bio quotes the late Heath Ledger (“Never give up on what makes you smile”), and he also links to Cinemaphoric, an entertainment website he founded.

According to CBS, Melvin works as a delivery driver, but his Instagram reveals that he also co-founded a fitness company called The Tough Fitness, which offers various online workout plans. The 25-year-old Virginia resident also uses his page to inspire his followers. One sample caption: “You're going to go through TOUGH times, but you can always grow from it.”

On Instagram, the 24-year-old adventure-seeker promotes his Dynamize Coffee company, which prides itself on being fair trade, mold free, and made without any chemical pesticides. While some posts show him snowboarding, swimming, and playing soccer, rock-climbing seems to be his favorite outdoor activity.

The 26-year-old native Colombian is a vegan “budtender” who enjoys surfing and photography. Though he relocated to the United States seven years ago, he very much embraces his Latin roots. Despite describing himself as “confident,” Will is also humble, joking that he’s “just a guy with dimples and an accent.”

A 26-year-old real estate investor from Boca Raton, Florida, Javonny isn’t too active on Instagram; his page only included 21 photos as of publication. Among his handful of posts are vacation photos taken in Detroit, New York City, Santiago, Chile, and the Caribbean island Bonaire.

Trina works as a psychiatric nurse and notes in her Instagram bio that she’s a mental health advocate. Outside of the healthcare field, the 24-year-old models and competes in pageants; she won Miss Hacienda Heights USA 2020 and Face of Kenya USA 2015. Though she lost Miss California USA, Trina noted in a 2020 post that she “left [the competition] with more confidence and growth” and intended to continue her pageant journey.

More like this
This Pre-'Love Island' Video Of Olivia & Zara Together Changes Everything
By Bustle UK
Love Island’s Latest Winter Season Finally Has A US Release Date
By Grace Wehniainen
'Love Island' Has Added Yet Another Bombshell To The Villa
By Bustle UK
Twitter Has No Chill As The 'Love Island' Villa Descends Into Chaos
By Darshita Goyal
Get Even More From Bustle — Sign Up For The Newsletter
From hair trends to relationship advice, our daily newsletter has everything you need to sound like a person who’s on TikTok, even if you aren’t.