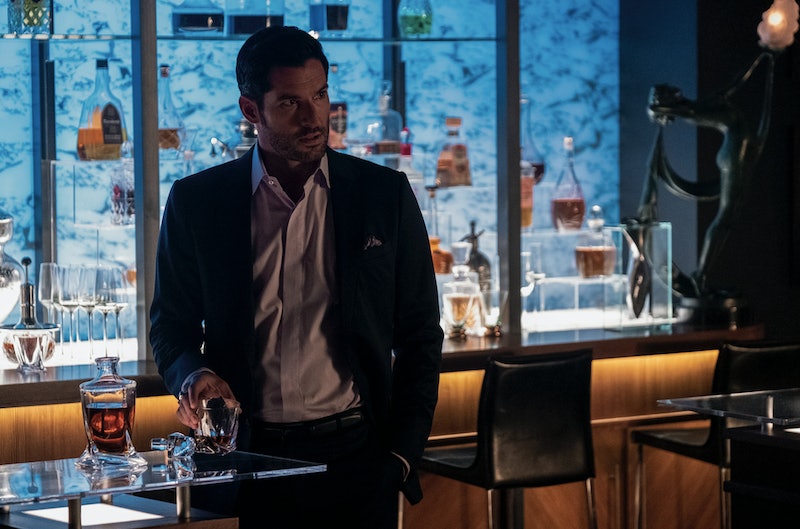 It's been well over a year since Lucifer returned to hell in order to protect those he cares about on Earth. And that was only in Lucifer's Season 4 finale. There was a lot of stuff leading up to that moment that you're going to want to remember before Season 5, particularly since the season was such a big turning point for the show.

After getting canceled by Fox and then revived by Netflix, Season 4 introduced a different version of Lucifer — namely one unrestricted by network guidelines for language and nudity. "There are moments where certain characters are able to say what they want to say,” Tom Ellis, who plays Lucifer, told TVLine ahead of Season 4, adding that there's also "a bit more flesh."

But that's only a small sliver of the changes Lucifer's characters encountered. Here's a full recap of Lucifer Season 4 to get you up to speed.

After Chloe saw Lucifer's devil face for the first time in Season 3, fans suspected that she would have a difficult time coping with the truth. But what they may not have predicted is that she would try to betray him. Worried that Lucifer was too dangerous to stay on Earth, the detective teamed up with Father Kinley in order to send him back to Hell. However, she ultimately had a change of heart and even stood by Lucifer's side when he went through his full-on devil transformation. By the end, she was no longer afraid of his true face and even admitted to Lucifer that she loved him.

Things were fairly rocky between Lucifer and Chloe in the early part of the season, and that only got more complicated when Lucifer's ex-girlfriend Eve showed up (yes, that Eve from the Garden of Eden). Though the two rekindled their romance for a while, Lucifer's deep feelings for Chloe eventually got in the way. Eve and Maze also seemed to be developing a connection, but Eve decided that she was tired of allowing relationships to define her and left to do some much needed soul searching. However, considering that she's set to return for Season 5, there may still be hope for the two.

Ella's Faith Was Lost & Then Restored

Ella had a really difficult time coping with Charlotte's death, forcing her to question her own faith and God's role in her life. She was eventually able to overcome her uncertainties and even went back to wearing her cross necklace by the end of the season. She also hooked up with Chloe's ex-husband Dan for a short time, though it's unclear where that romance will go from here.

Amenadiel & Linda Had A Son

Though there was always been a spark between Amenadiel and Linda, the two took their relationship to a new level in Season 4, much to Maze's displeasure. This eventually resulted in a child, Baby Charlie, born half-angel and half-human. His unique DNA made him an instant target to demons, who were desperate to crown Hell with a new king. Lucifer, Chloe, Amenadiel, Eve, and Maze were able to rescue Charlie before it was too late, but it also forced Lucifer to accept a hard truth and sacrifice his life on Earth.

Baby Charlie's kidnapping made Lucifer realize that he'd been away from his hellish throne for too long and his demons could no longer be trusted without his direct supervision. This brings us up to the present day, with Lucifer having left his life in Los Angeles and returned to the underworld. Needless to say, this is all going to lead to one hell of a fifth season.