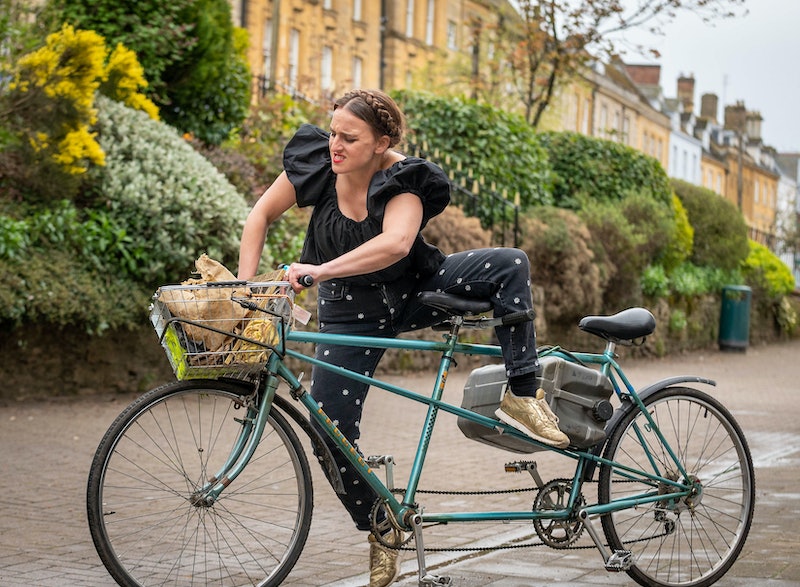 We could all do with a laugh this year, and thankfully a new BBC Three comedy is right around the corner. Please Help – written by and starring comedian Lucy Pearman – follows the story of Milly, a woman living on a remote farm in Oxfordshire, trapped in a boring and claustrophobic life as her grandmother's only carer. Over time, she soon begins to develop strange magical powers that (unsurprisingly) turn her world upside down. We caught up with Pearman to find out the inspiration behind Please Help.

Pearman is a seasoned comedian and actor and was nominated for Best Newcomer at the Edinburgh Fringe Festival in 2019. Earlier this year, she appeared as Lisa Watkiss in season two of This Time With Alan Partridge on BBC One and, before that, she starred in The Mind Of Herbert Clunkerdunk on the BBC, too.

Now Pearman is fronting her very own BBC show. Speaking about the inspiration behind Please Help, she tells Bustle, “I had the idea a very long time ago about a girl who floats when she’s happy but has to try and hide it in when she’s in public. Then it just sort of grew from there.”

Despite possessing no magical powers in real life (“which is such a shame, actually”), Pearman reveals that the magical side of the show actually took inspiration from real life events – kind of.

“I’ve had a lot of different mad jobs and once my sister and I accidentally became estate agents,” Pearman says. “Long story but, to avoid people coming into the office, we used to pretend that the other one had gone invisible.” The comedian says she often images that going invisible would be “the best way to handle being heckled or harassed in the street,” adding: “There are times I would have loved to handle it the way Milly does.”

The relationship between Milly and her grandmother is also based on true events. Pearman – who, like Milly, grew up on a farm in Oxfordshire – cared for her own grandmother. However, the comedian makes clear that she “absolutely didn’t do it on [her] own.”

“Caring for an elderly family member can be quite lonely and challenging but it was a huge privilege for me to be part of the last chapter of her life,” she says.

Speaking about what she hopes viewers will take away from the show, Pearman says “There are a lot of wider themes and influences in there but I don’t want to prescribe any particular interpretations or meaning because I want people to connect individually with whatever speaks to them.”

More like this
9 Time Catherine Cawood Was An Absolute Badass In Happy Valley
By Sophie McEvoy
Twitter Simply Couldn’t Cope With The ‘Happy Valley’ Finale
By Sophie McEvoy
Olivia Colman Stars In First-Look Trailer For BBC's 'Great Expectations'
By Sabah Hussain and Sam Ramsden
Alan Carr's 'Changing Ends' Is A Witty Sitcom Based On His Own Life
By Darshita Goyal
Get The Very Best Of Bustle/UK
Sign up for Bustle UK's twice-weekly newsletter, featuring the latest must-watch TV, moving personal stories, and expert advice on the hottest viral buys.