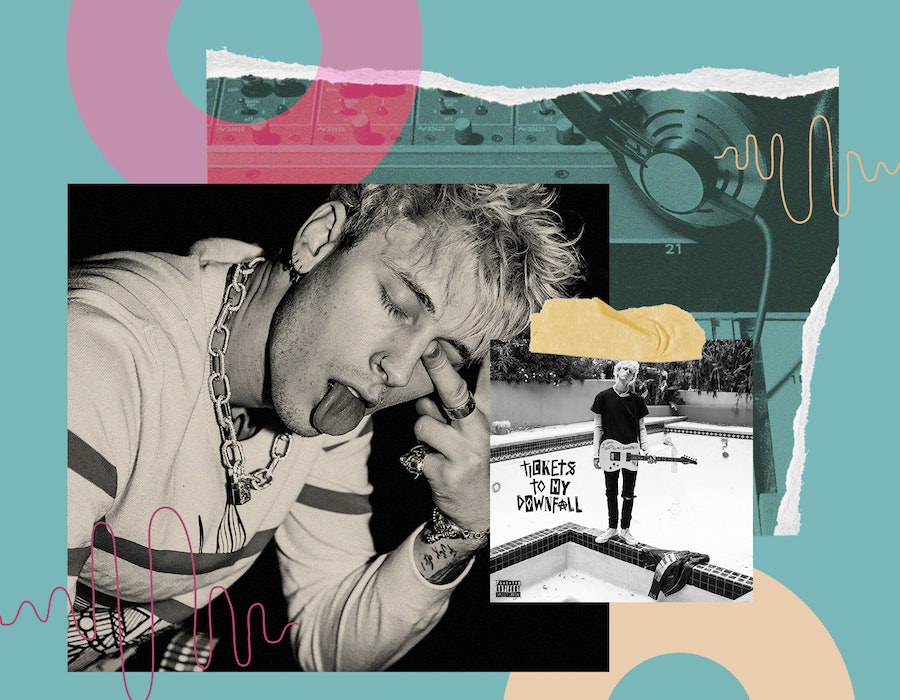 Machine Gun Kelly is a certified emo kid. As a teen, the 30-year-old pierced his nipple with a safety pin and would spend his days recreating Jackass stunts. “I was full on wearing JNCO jeans and skating with my friends every day and making music,” MGK tells Bustle from Los Angeles, where he’s gearing up to square off against Post Malone in a virtual beer pong tournament. “[It was] the early 2000s and 50 Cent and Linkin Park [were big] at the same time. Blink 182, too. They all coincided and were close to [my] heart in that era.” It’s that duality between punk and rap that’s guided the multi-hyphenate artist’s career thus far. When audiences were first introduced to MGK in 2010, he was a scrappy young rapper prone to bravado whose lyrics boasted about his excess-driven lifestyle. But these days, the musician is ready for a reintroduction — courtesy of his new pop-punk sound.

That new sound is the result of spending time in the studio with Blink-182 drummer Travis Barker. A two-month collaboration between the two resulted in MGK’s fifth studio album Tickets to My Downfall, which is both produced by and features Barker. The album is hyper-nostalgic, recalling Enema of the State era Blink 182. Yet for MGK, that’s beside the point. “It's like, how do you miss the vulnerability [in the music]? It’s just because I gave it to you easy enough to digest. And that’s the magic,” he says. “I mean my favorite lyric I’ve ever written was off this album: ‘If I’m a painter, I’d be a depression-ist,’ [which was] my perspective coming from a place of sadness and a life of letdowns.”

But in other moments on the album, MGK doesn’t bury his pain in pithy wordplay. “[One day] I went into the booth and I was just screaming different things. Then I stumbled upon ‘Lonely, lonely even when the room is full.’ I just kept singing it over and over again and I started crying,” he says of his song “Lonely,” which details his relationship with his father who died in July. The track includes an audio snippet of the last conversation the two shared. “I [remember] listening to 'Lonely' in the car right after my father passed and I did the same thing,” MGK adds. “I just burst out crying.”

His experiment in vulnerability is paying off. Tickets to My Downfall’s first single, “Bloody Valentine,” has nearly 40 million YouTube views; the British rock magazine Kerrang! recently dubbed MGK “the most important rock star on the planet;” and he’s already scored a Video Music Award for his work on the album. The praise is hard won for the artist, who’s been vocal about his hunger for respect. “[I have a tattoo] saying, ‘F*ck fame, it killed all my favorite entertainers.’ A lot of [artists] get understood after the fact, like 10 years, or 20 years, or 30 years later. So I’m just grateful to be alive for this moment,” he says.

Below, MGK muses about the Grease soundtrack, hookup music, and an ill-fated song with Lana Del Rey.

You worked intimately with Travis Barker over the course of two months to record this album. What was that collaboration process like?

We started knowing each other's food orders. We were just waking up super excited to go spend like 14 hours in the studio. This was before COVID hit, [but] we all had a really gnarly chest cold at one point during [recording]...

So maybe you had COVID without realizing it.

Yes. Facts. And we were still in the studio every day, even with whatever that chest cold was. I was coughing up blood while recording “All I Know” because I was going out every night, screaming, drinking, and recording through all that. It was real wear and tear, but it was the most fun experience ever. I forgot we were even recording an album. I would just go in [to the booth] and be like, "Yo, I got this story.” And everyone would be like, "Dude, you got to go tell that same thing, but in there."

I made the song “Kiss Kiss” after New Year’s. It’s just about f*cking, drinking, and going around Sunset [Boulevard]. No plans, just like you're back in your teenage years with nothing to do and the world at your own fingertips.

Tickets to My Downfall is really just your diary.

What’s the weirdest way a song of yours has ever come to be?

I have a million answers to that. The Lana [Del Rey] one was cool [even though] it never came out. I was playing new songs I was working on, she was smoking a cigarette, and my friend was making a beat in the basement. She just started singing this hook and I was like, “Woah, do you want to lay that?” She was like, “Yeah.” Then I had him [stop] what he was doing and we went to the studio in the other room and recorded it. It was cool because it was just over a cigarette break, know what I mean?

What’s the first CD or tape you ever bought?

The tape I remember playing the most back in the day was the Grease soundtrack.

Were you a big fan of the movie?

Oh yeah, I love Grease. “Tickets to My Downfall” is almost its own version of like a pop-punk Grease.

Would you ever want to play Danny Zuko?

What’s the song you put on when someone hands you the aux?

You can go a few different ways. It could be “Operate” by Peaches or like “Duality” by Slipknot.

The tonal whiplash of those songs.

Or even “I Want It That Way” by Backstreet Boys.

… And The Music That Gets Him In The Mood

The beginning of After Hours by the Weeknd. Just that beat at the beginning [on a] loop over and over for like two hours. I'll be stoked on that soundtrack.

Did you lose your virginity to music?

No, I didn’t. Obviously at the time you’re not thinking about it [like this], but I’d want it to be something goofy. Do you remember that song where it’s like, “Oh, dreamweaver I believe you can get me through the night?” It would have been funny if some terrible ‘80s song was playing and you're both like trying to act like you're not thrown off by the music, just to help the awkwardness.

I’m picturing you putting a record on, not even a tape or a CD, just full ‘80s.

More like this
Craig David Is Still Slicker Than Your Average
By Olivia-Anne Cleary
Even If She Tried, Beth Ditto Couldn’t Stay Away From Music
By Ivana Rihter
'School Of Rock' Changed Joe Keery's Life Forever
By Alyssa Lapid
Lizzo Twerks While Playing James Madison's 200-Year-Old Crystal Flute Onstage
By Radhika Menon
Get Even More From Bustle — Sign Up For The Newsletter