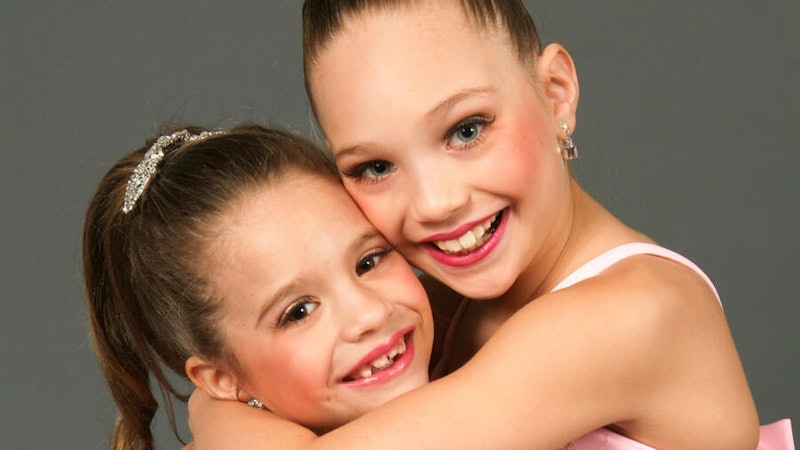 Maddie and Kenzie Ziegler are all grown up — and finally spilling details about their childhood in the spotlight. In Elite Daily’s new cover story tied to the publication’s May 18 redesign launch, the teenage sisters interviewed each other about the “stressful” fame that came with their reality TV hit Dance Moms, and how they’ve supported one another since leaving the show, even when it comes to their love lives.

The Zieglers, who are now 18 and 16 years old, admitted that the stardom acquired from Dance Moms made life more difficult. They couldn’t even finish at their elementary school because they missed so much class to compete at Abby Lee Dance Company. “We got pulled out of school every day to go to dance and film a TV show, so that was not normal at all,” Maddie remembered. “Then once we started traveling, people started recognizing us. I remember we were in an ice cream store and someone called our names, and we were so freaked out. Like, how did these people know us? And then we realized, ‘Oh, there’s a lot of attention around our show.’”

Given how Kenzie was just 6 years old when the show started, dealing with the pressures of fame and dancing competitively at the same time was even more difficult for her. “When I was younger, I was going through a lot of hate, so I’m glad that I had you,” she told Maddie. “Our teacher, the environment we were in — it was all very stressful as a kid. I’m glad we were doing the same thing so I could have a shoulder to lean on.”

Since leaving Dance Moms and the Abby Lee Dance Company, the sisters are on separate career paths. While Maddie continues to dance, specifically as Sia’s protégé, she’s also taking on major acting roles, like in the upcoming remake of West Side Story. Meanwhile, Kenzie has started a full-fledged music career, and the distance has actually improved their sisterhood.

“It broke my heart that you got compared to me so much as a dancer,” Maddie told Kenzie. “Like, if you didn’t win, why weren’t you as good as Maddie? Everyone should be allowed to shine in their own ways. That’s why I was so happy you took [up] singing, because I can’t sing for the life of me. It’s good that we have our own things.”

Their improved connection also helps when it comes to romance. The two talked about how they’ve helped each other in relationships, especially Kenzie, who Maddie says gets “blinded” by love. “You’ve definitely helped me realize, in relationships, that I can’t let guys walk all over me,” Kenzie told her. “Now I don’t do that at all, but you saw it firsthand, and you were so angry about it, and I totally shut you out. I was like, ‘I don’t know what you’re talking about.’ Then I really thought about it, and I was like, she’s right. Every time you’ve been right.” As if you needed anymore proof on why sisters always come before misters.

More like this
Kathy Hilton Tried To Explain Why She Misidentified Lizzo As Precious On Live TV
By Jake Viswanath
Is Nathan Fielder Dating Anyone? What 'The Rehearsal' Star Has Said About His Relationships
By Grace Wehniainen
Armie Hammer's Exes Share His Alleged Voice Messages About Cannibalism & Abuse
By Grace Wehniainen
Laura Tott From 'First Dates' Married Her Long-Term Mystery Boyfriend
By Darshita Goyal
Get Even More From Bustle — Sign Up For The Newsletter