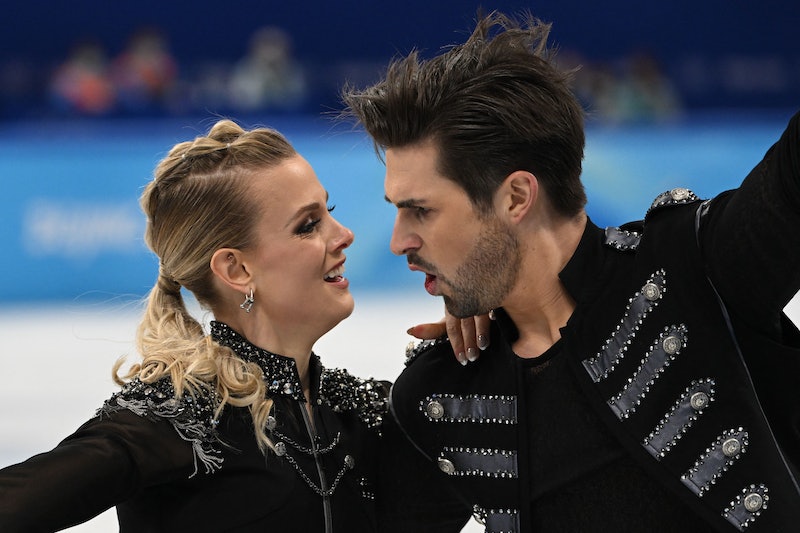 The best thing about ice dancing, particularly at the 2022 Beijing Olympics, is that there is every relationship status imaginable represented on the ice. There are the Taschler siblings from the Czech Republic, the platonic Gabriella Papadakis and Guillaume Cizeron from France, and the many teams who are currently in relationships with each other or even married. But get this — American ice dancers Zachary Donohue and Madison Hubbell are exes, as they’ve candidly explained in interviews, and they didn’t let it stop them from winning two Olympic medals together.

“We’ve always had this certain chemistry and we dated for about two-and-a-half years,” Hubbell said in an episode of the Olympic Channel series On Edge, which followed several teams from the Ice Academy of Montreal in the lead-up to the Winter Games. “The thing that connects us as partners is the passion and interest in skating.”

The skater also referred to their “fire and fire” dynamic. “I think people who skate by us sometimes are like, ‘Oh my god, they’re fighting again,’” she said. And that is apparently a big part of why it didn’t ultimately work out between them as an off-ice couple. Being together 24/7 with their “particular personalities was just explosive,” as Hubbell said in a Team USA interview in 2017. “We had to ask ourselves what was more important, our on-ice partnership or our off-ice relationship? And we were both very clearly said the on-ice partnership is No. 1.”

And that decision has paid off. In their second Olympics, the two competed in the rhythm dance for the ice dance portion of the team figure skating event on Friday, Feb. 4. They put down a winning performance that helped Team USA finish in second overall. (There’s speculation that their silver medal could be upgraded to a gold, pending the outcome of a doping investigation.) Donohue noted in an Instagram post afterward that getting a medal was the fulfillment of a longtime dream.

“What a week its been already!” he wrote, in part. “I am so very grateful and honored to be a part of this amazing team. Olympic Medalist.... Since I first watched the Olympics as a kid, it’s been a dream of mine.”

The two weren’t done, though. After the rhythm dance in the individual ice dance event on Saturday, Feb. 12, Hubbell and Donohue sat in third place, well-positioned for a podium finish. They then skated a gorgeous free dance on Monday, Feb. 14 (Feb. 13 in the United States) and landed on the podium as bronze medalists alongside second-place finishers Victoria Sinitsina and Nikita Katsalapov as well as newly minted Olympic champions Papadakis and Cizeron.

Funnily enough, the competition also included Hubbell’s off-ice partner, her fiancé, Adrián Díaz, who trains with them in Montreal and represents his home country, Spain. She posted a photo of the two of them in the Olympic Village on Feb. 5, masked but kissing in front of the Olympic rings. “Kissing my fiancé, but make it protocol,” she wrote in the caption.

And just in case it wasn’t already enough for you, Donohue used to date Olivia Smart, who is none other than Díaz’s ice dance partner. He noted in a mini-documentary that the American team made when they were still dating that he “thought that square created between the four … would be awkward,” so he initially didn’t pursue her but later decided to go for it. They dated for more than a year before going their separate ways. Now he dates another ice dancer, Australia’s Chantelle Kerry, who did not compete in the Beijing Olympics.

Dating your training partner and competition definitely still keeps it interesting, and they have shared interests and supportive partners who understand all of the ups and downs of competitive figure skating. You couldn’t ask for anything more.