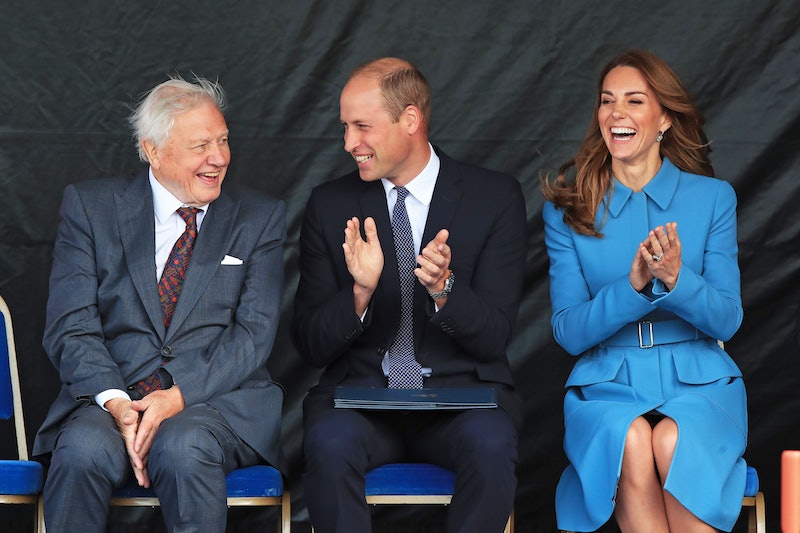 Malta has retracted its claim on the prehistoric shark tooth given to Prince George by Sir David Attenborough at Kensington Palace last week. The legendary broadcaster presented the giant tooth to the young royal during a private viewing of his latest Netflix documentary, A Life on Our Planet, which was screened in the gardens to the Duke and Duchess of Cambridge and their children. However, on seeing the official pictures which were shared on Instagram by @kensigntonroyal, Maltese culture minister José Herrera suggested Malta might like the tooth back.

As the Independent reports, the fossilised tooth, which is thought to have belonged to an extinct species of giant shark known as the 'Carcharocles megalodon', was found by Attenborough during a family holiday in the late 1960s — and is believed to be around 23 million years old.

The removal of an "object of geological importance" has been banned in Malta since 2002, when the Cultural Heritage Act was introduced, and initial reports said Herrera planned to investigate whether the tooth should be returned to the island on which it was first discovered. Speaking to the Times of Malta, Herrera said that he would "get the ball rolling" on returning the shark tooth to the country's heritage collection. “There are some artefacts that are important to Maltese natural heritage, which ended up abroad and deserve to be retrieved,” he said. “We rightly give a lot of attention to historical and artistic artefacts. However, it is not always the case with our natural history. I am determined to direct a change."

However, the Evening Standard reports that the Maltese government has now confirmed the tooth will remain with Prince George – after facing criticism on social media over Herrera's comments. Malta's prime minister Robert Abela is reported to have said “we should avoid creating unnecessary controversies”.

Per the Evening Standard, a spokeswoman for the culture minister said: “Further to the initial remarks as reported in the Maltese media, minister Herrera would like to reiterate that no action was initiated or will be taken on the issue in (question).”

Attenborough's upcoming feature film, A Life on Our Planet, looks back on his 60-year career documenting the natural world, and in it he reflects on “the devastating changes he has seen" during that time. The film will enjoy a limited cinematic release in the UK starting Monday, Sept. 28, and will be available to stream on Netflix as of Sunday, October 4.

More like this
Helena Bonham Carter Doesn't Think 'The Crown' “Should Carry On"
By Sam Ramsden
Rita Ora Finally Opened Up About Marrying Taika Waititi & Their "Perfect" Wedding
By Sophie McEvoy and Catharina Cheung
Michaela Coel Has Some *Thoughts* About The Nepo Baby Discourse
By Maxine Harrison
Princess Diana’s Brother Shared A New Photo Connected To Her Childhood
By Darshita Goyal
Get The Very Best Of Bustle/UK
Sign up for Bustle UK's twice-weekly newsletter, featuring the latest must-watch TV, moving personal stories, and expert advice on the hottest viral buys.