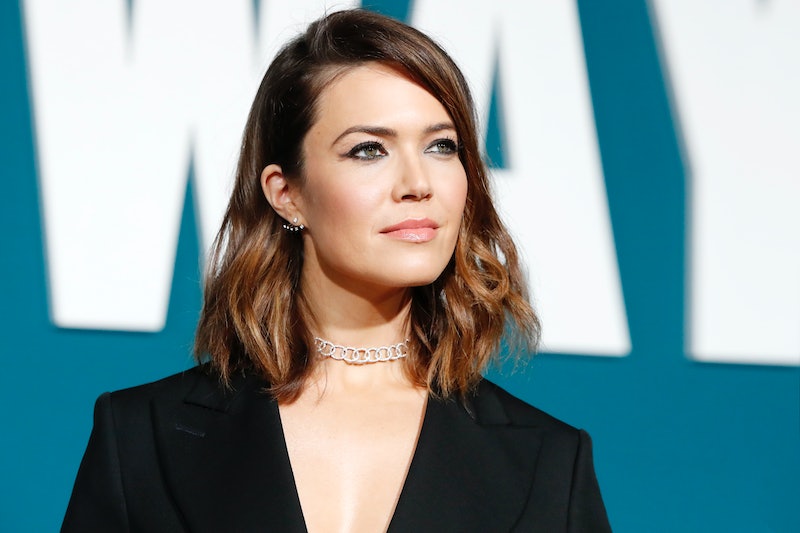 Mandy Moore may have received her first Emmy nomination by playing a mom on This Is Us, but she wasn't drawing from her own experiences for the role. Now, for the show's upcoming season, she'll have a little more inspiration from her personal life. Mandy Moore is pregnant with her first child — and she's already revealed the baby's sex.

The singer and actor announced the exciting news on her Instagram Thursday, Sept. 24, posting a series of pictures with her husband, Taylor Goldsmith, proudly cradling her baby bump, photographed by Jenna Jones. "Baby Boy Goldsmith coming early 2021," she wrote. Goldsmith, a fellow musician and lead singer of the folk rock group Dawes, also shared the same pictures on his own account.

This will mark the first child for both Moore and Goldsmith, who first started dating in 2015. The couple got engaged in November 2017 before tying the knot in an intimate backyard ceremony at their Los Angeles home just a year later. "We are both pretty quiet, private people," she previously told People about her low-key nuptials. "I never imagined myself with some beautiful dress in front of 300 people. It will be quiet and private — just for us."

Moore's big news comes on the same day that she and her This Is Us co-stars finally return to set to film Season 5 of the hit show. Writer Dan Fogelman shared a photo of Moore and onscreen husband Milo Ventimiglia from the set, poking fun at how they must shoot the show with masks and social distancing. A 2020 television sex scene," he joked. "We’re back." She also shared some behind-the-scenes snapshots from her and Ventimiglia's first day back via her Instagram story, joking that "work is a little different these days."

On Wednesday, Sept. 23, NBC announced that the Season 5 premiere of This Is Us has been bumped up two weeks from its original Nov. 10 date. The two-hour season premiere will now air on Tuesday, Oct. 27, and while recent events like the COVID-19 pandemic and protests for racial justice won't change the course of the season, they will be incorporated into the show somehow. "What's happening in the world may shift the details of how things happen, but the big moves continue to happen — and actually potentially heighten and make better the television show then maybe some of our initial plans, because that's our job," Fogelman told Entertainment Weekly about the upcoming season.

Regardless, when the show returns in October, expect some major changes for the Pearson family this year — and for Moore in real life.