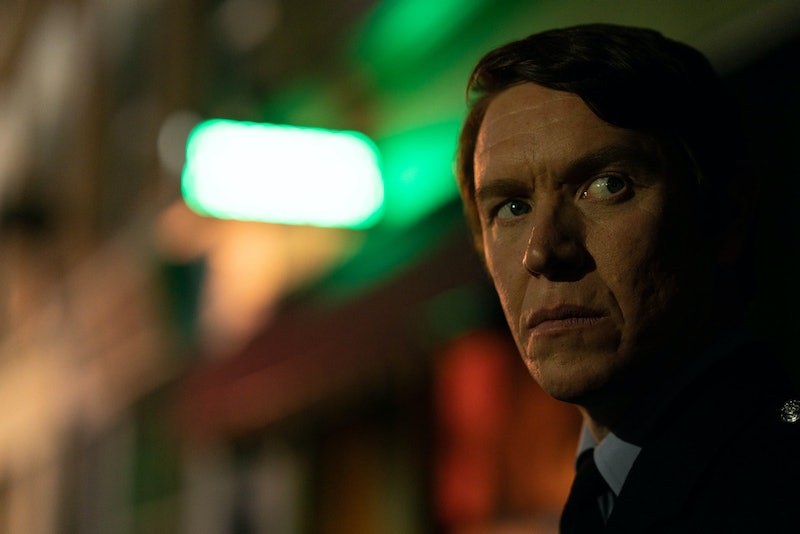 Steve McQueen's Mangrove — which is part of the BBC’s small axe series — is garnering attention for its portrayal of the Mangrove nine, one of the most important true stories in British Civil Rights history. The story follows the real life events that led up to the arrest and subsequent acquittal/suspended sentencing of a group of Black protestors who were standing up against institutional racism in the police 50 years ago. But what happened to PC Frank Pulley, the racist police officer who led the force that targeted the Mangrove protestors? Here's everything we know from our research.

Who is PC Frank Pulley?

It's worth briefly going into the real story that is covered within Steve McQueen's Mangrove, and the role Pulley takes. Pulley is the epitome of corruption within the police force in the 1960s and '70s, and is the officer who leads the charge against the peaceful protests that the Mangrove nine were participating in.

The protesters spoke out after years of harassment from the police, who were determined to shut down Mangrove, a Trinidadian restaurant in Notting Hill that was a hub for the local British-Caribbean community. The local council, Kensington and Chelsea withdrew the all-night cafe licence eventually, leading to owner Frank Crichlow's peaceful protests. The protests ended in nine being wrongly arrested for incitement to riot.

As mentioned, Pulley led the charge, and was known to be a racist, corrupt officer who would arrest people purely due to the colour of their skin. However, he was discredited at the trial for the Mangrove nine, and is described by defendant Rhodan Gordon in Mangrove as a "bully." "I have known that man for 10 years and no bigger bully, no greater thug, no greater gangster planted his big foot in Notting Hill in all that time," he says. The case led to racial discrimination by police being acknowledged for the first time in UK law, making it a landmark moment in British Civil Rights history.

What happened to PC Frank Pulley?

Following the trial, PC Pulley was somehow allowed to return to the Notting Hill area, which the Mangrove nine and others fiercely took issue with. The management committee of the Mangrove in All Saints Road put out a statement, saying: "PC Pulley has returned to Notting Hill. Within days we have had complaints from 4 different sources about the officer’s behaviour. In response, we have written an open letter to the Home Secretary and the Commissioner of Police stating our demand – that PC Pulley be immediately removed from the area."

"This demand is not new. In fact Pulley was removed from the area following the black community’s confrontation with the local police on August 9 1970. At the trial which followed, the Mangrove trial, Pulley appeared as a major prosecution witness. His evidence was challenged on the basis that he was dishonest, that he was a liar. The jury acquitted 5 defendants and intimated in discussions following the trial that Pulley’s evidence was not believed."

"It has since been stated that he was transferred to Scotland Yard. We are not aware on what basis he has returned to the area, neither do we care. We simply want him out."

Another thing we know about Pulley is that he sued The Sunday People newspaper in 1972 for libel, claiming that an article which was written about the Mangrove Nine trial had "pilloried" him. He somehow won the case, being awarded £5,000 in damages and costs.

It is unclear what Pulley went on to do next in his retirement, or whether he is still alive today.