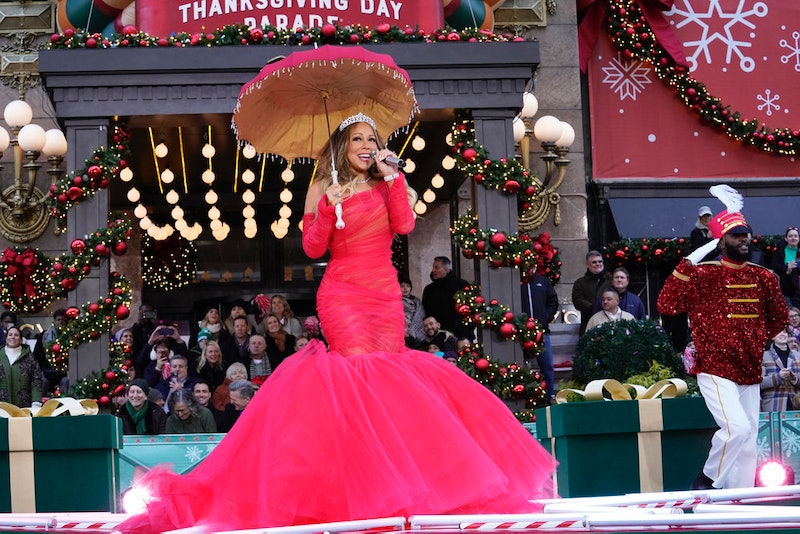 It wasn’t just Santa Claus who brought some magic to the 2022 Macy’s Thanksgiving Day Parade. Mariah Carey, the Queen of Christmas, closed out the show with a performance of her holiday classic “All I Want for Christmas Is You.” She made the event all about family with the help of two adorable backup dancers: Monroe and Moroccan, her twins with ex Nick Cannon.

The five-time Grammy winner performed on a star-shaped stage outside of Macy’s Herald Square, dressed in a festive red gown with a tiara and a matching parasol. When she launched into her perennial hit, there was no sign of her kids — not until about halfway through, when two large gift boxes popped open, and they emerged. The twins danced in the boxes, Moroccan in a red hoodie and Monroe in a white dress with fairy wings. Toward the end, they were finally lifted out and joined the rest of the dancers on the street.

Carey, who beamed throughout her performance, revealed how special the experience was for her in a post-show Instagram post. “Happy Thanksgiving!!!” she wrote. “Grateful and so proud of my beautiful kids Roc and Roe, grateful for the lambily and for the precious moments in life.” She concluded by fully welcoming the Christmas season, adding, “Now it’s reaaaallly time!!!” and the Christmas tree and Santa Claus emojis.

Fans cheered the music legend on in the comments, with one writing, “That was PERFECT. SO so festive!” Another described it as “the best,” while someone else added, “yassssssss iconic.” Meanwhile, TV personality B. Scott called it “Pure Opulence.”

There was some Twitter criticism, though, as viewers speculated that Carey was lip-syncing during her performance. “Mariah Carey is so lip-syncing,” one person tweeted. “I mean, like bad. I could do without the closeup.” Another added, “Why is Mariah Carey holding a parasol while lip-syncing a christmas song in NYC?” Lip-syncing is actually something all of the Macy’s Thanksgiving Day Parade performers have to do, according to a 2018 tweet from John Legend, who knows from experience.

“Fun fact. We all have to lip sync on this parade because the floats don’t have the capacity to handle the sound requirements for a live performance,” he wrote in response to a tweet criticizing him and Rita Ora for lip-syncing during the parade.

Complaints hopefully won’t take away from Carey’s joy. Leading up to the parade, she made it clear how much it meant to her to be part of the longstanding holiday tradition. “My childhood dream is coming to life!” she wrote, in part, on Nov. 18. “I’m going to be opening for the one and only, SANTA CLAUS … at this year’s @macys Thanksgiving day parade!”

More like this
Fellow "Queens Of Christmas" Celebrated Mariah Carey's Failed Trademark Bid
By Stephanie Topacio Long
90 Songs To Blast During The Holiday Season To Feel All The Feels
By Brian Anthony Hernandez
Kim Kardashian & Tristan Thompson Had An "Inspiring" Thanksgiving Celebration
By Brad Witter
The 'Love, Lizzo' Harry Styles Scene Is Just 1 Moment That Made Fans Feel Seen
By Brad Witter
Get Even More From Bustle — Sign Up For The Newsletter