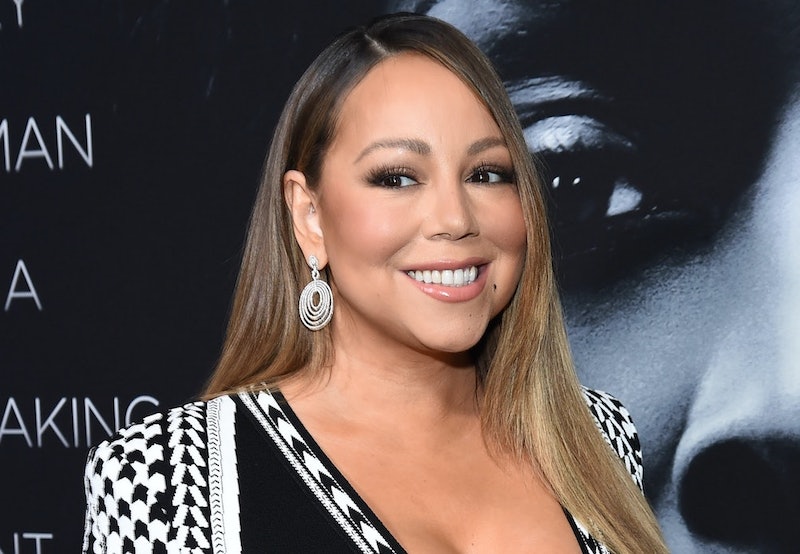 Perhaps the elusive chanteuse might not be quite as elusive as we thought. During an appearance on The Tonight Show on Monday, Dec. 7, Mariah Carey addressed rumors that her New York Times best-selling memoir The Meaning of Mariah Carey would be adapted for the screen, revealing that it has, in fact, been discussed — and that a screen adaptation has always been the goal.

“We're talking about some things,” Carey replied when host Jimmy Fallon mentioned the rumors. “I really feel like it should. That was always my goal.” She continued, "But it was important to write the book first, 'cause there's so much, and then to pick and choose how we translate that.” When asked if Lee Daniels, who directed Carey in the 2009 film Precious, would direct, Carey remained mum.

“We love Lee. He’s one of my dearest friends and he gets me in a way that most people don’t,” Carey said. “But I’m not allowed to say yes, no, maybe so — only Lee. Only Lee tells little leaks about things.” The biggest question, however, is: who could possibly take on the role of Carey? “I don’t know,” Carey said. “We’re figuring out different takes on that.” The actor would have to “have quite the range,” the singer added, because “there’s a lot” to take on.

The singer's autobiography offers an intimate look at her life, chronicling the toll of her parents’ divorce, the financial hardship her family endured, and the bullying that accompanied her biracial identity. "It’s very difficult to explain to most people who haven’t experienced that on some level,” Carey told Elle. “Being very ambiguous-looking, that really affected the way people saw me or judged me, depending on what kind of caste system you grew up with.”

Carey also revealed that her unbridled love for the Christmas season comes from the desire to create Christmases that she wished she had during her childhood. “I think it’s just that longing that I had as a child, that I always wanted things to be perfect for the holidays, and they never were,” Carey added. “It was always somebody ruining the moment, always these dysfunctional family members who came around and foiled everything. And so I just made a pact with myself that I wasn’t going to allow that to happen anymore.”

More like this
Paul Mescal, Man Of Mystery
By Samantha Leach and Heather Hazzan
Here’s Everything Coming To & Leaving Netflix In October
By Jake Viswanath
Alan Rickman's Diary Reveals Why He Considered Leaving 'Harry Potter'
By Darshita Goyal
Olivia Wilde Addresses *Those* Florence Pugh & Shia LaBeouf Rumours
By El Hunt and Sam Ramsden
Get Even More From Bustle — Sign Up For The Newsletter