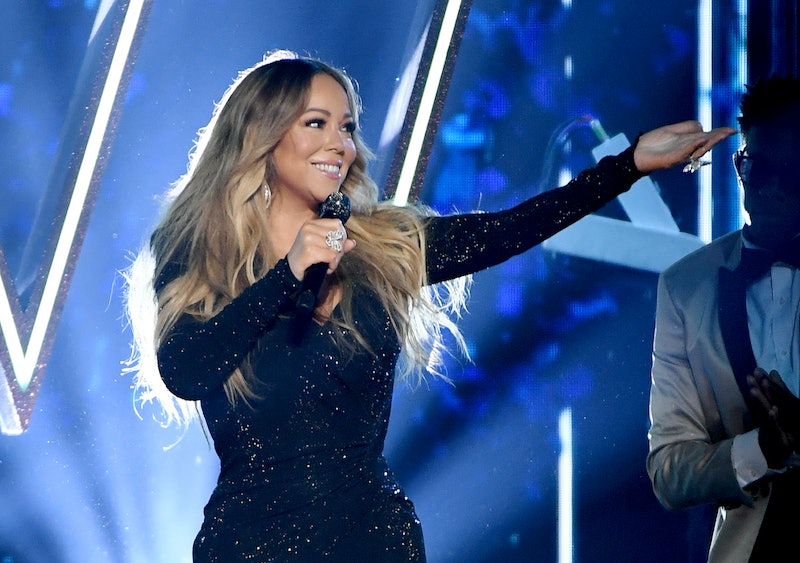 Joan Crawford and Bette Davis, Taylor Swift and Kanye West, Mariah Carey and Eminem: iconic feuds like these have become pop culture legend in their own right, and one of them is heating up yet again. Mariah Carey threw shade at Eminem while teasing her memoir in a new interview with New York Magazine, published on Monday, Aug. 31. And in classic Mariah fashion, the shade was brutal and effortless, darling.

Soon after Carey announced the release of her upcoming memoir The Meaning of Mariah Carey, outlets like US Weekly reported that Eminem was "stressed" about the book and worried that he would be mentioned thanks to his fraught history with the singer. When asked to comment on the report, Carey refrained from really going there, but said everything we needed to know.

"There’s some songs that I can sing in response to that, but I will not do it," she said, likely referring to her smash 2009 hit "Obsessed," which has long been reported to be about the rapper and his claims that they were romantically involved, which she has denied. "If somebody or something didn’t pertain to the actual meaning of Mariah Carey, as is the title, then they aren’t in the book," she concluded. In Mariah language, this likely means that Eminem is simply not relevant enough to be mentioned in her life story. After the interview was released, Carey doubled down on the shade in a tweet, adding the perfect Mean Girls GIF for the occasion.

The feud between the record-breaking singer and the rapper has been brewing since 2002, when Eminem insinuated that he had a romantic and sexual relationship with Carey in his songs "Superman” and “When The Music Stops." He later told Rolling Stone that he didn't like Carey "as a person." She denied that a sexual relationship had ever happened, telling Larry King in 2002 that she hung out with him a total of "four times," and seemingly proceeded to mock him on her song "Clown."

The battle was reignited seven years later, when Eminem bashed Carey and her then-husband Nick Cannon on his song "Bagpipes From Baghdad" in 2009. She responded with the iconic hit "Obsessed" just six months later, in which the singer accused the rapper of being, well, obsessed with her, without mentioning him by name. Their spars haven't stopped yet, with Eminem mentioning Carey and Cannon yet again in November 2019 on Fat Joe and Dr. Dre's song "Lord Above."

Now it seems Carey is getting the last word in her memoir — by simply not saying anything at all.