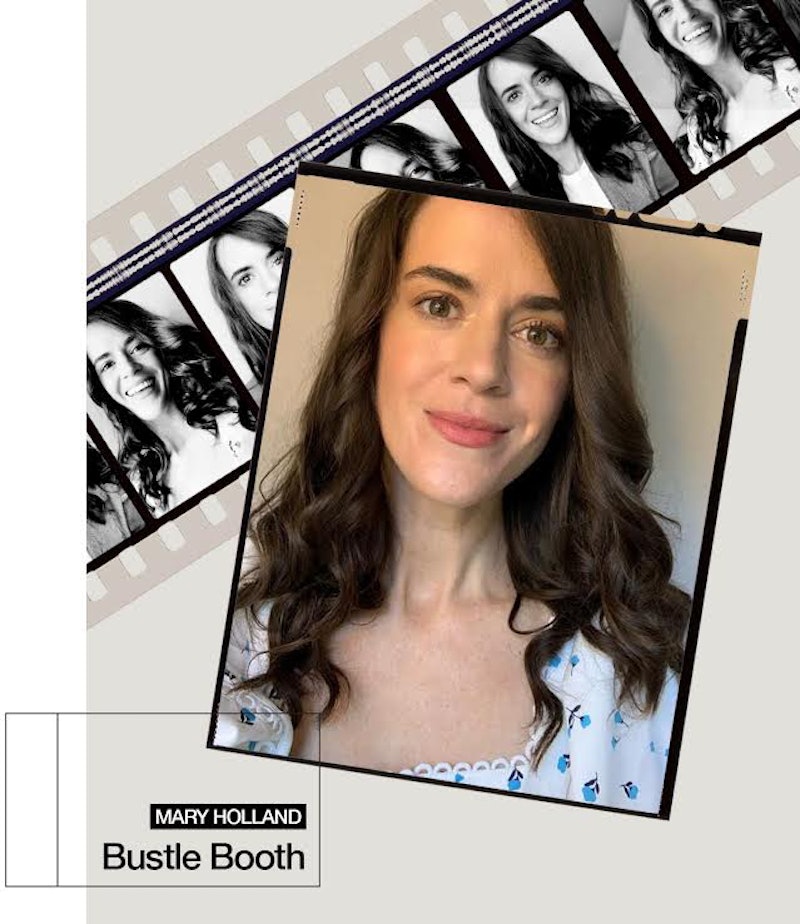 Mary Holland has fond memories of her breakout role on Veep, where she played Shawnee Tanz, Jonah Ryan’s social-climbing fiancé. But for Holland, one of the best moments on set wasn't getting to hurl insults at scene stealer Timothy Simons, or act alongside comedy legend Julia Louis-Dreyfus. It was spent at table reads getting to know co-star Clea DuVall, who, despite not sharing any scenes together on the show, became her friend and writing partner for this year’s highly anticipated rom-com Happiest Season.

The Hulu holiday film follows Abby (Kristen Stewart), a young woman spending the holidays with her girlfriend Harper’s (Mackenzie Davis) family — only to find out moments before they walk through the door that Harper's not out to her loved ones. Holland not only co-wrote the film with DuVall but stars in it as Jane: Harper's vibrant, Isla Fisher in Wedding Crashers-esque middle sister, who's often stuck playing referee between her two hyper-competitive siblings.

While DuVall had long been toying with the idea for the script, the writing duo filled in the particulars of the film over many eight-hour marathon writing sessions together. “We didn’t know each other [well] before working on this, so we were also becoming friends through this process, which made it really dear to me,” she tells Bustle. “Clea’s now one of the most important people in my life.”

Unlike many screenwriting pairs, who often work apart from one another or divvy up scenes to take on, Holland and DuVall wrote their entire movie side by side in order to get many of the nuances right. Because Happiest Season is part of such a rigid, heteronormative film category — industry titan Hallmark just premiered its first film featuring a same-sex couple in leading roles this month — it was critical for the pair to master their script and do right by LGBTQ+ audiences. “We wanted these characters to be super specific and three-dimensional and have journeys that they were going on in addition to the main arc of the story,” Holland explains. “We wanted to play with this idea of going back home and reverting to old patterns and really ancient histories with the people you became a person with.”

Though DuVall's own encounters informed the queer, emotional core of the story, Holland (who identifies as straight) brought what she calls the “fertile ground” of her relationship with her own sister to create the siblings' chaotic dynamic in Happiest Season. “Some of the worst physical fights I’ve gotten into were with my sister!” she says with a laugh. "[We all] behave the worst around people who you know will love you know matter what.” Especially over the holidays.

Get to know more about Holland — including her love of Lord of the Rings — in her Bustle Booth questionnaire below.

Frodo: "I wish the ring had never come to me. I wish none of this had happened."

Gandalf: "So do all who live to see such times, but that is not for them to decide. All we have to decide is what to do with the time that is given to us." (Lord of the Rings: The Fellowship of the Ring)

She makes me laugh.

More like this
On 'The Handmaid’s Tale,' Christine Ko Fights Back
By Gretchen Smail
Khloé Kardashian Debuts Baby Boy On 'The Kardashians' Season 2 Premiere
By Jake Viswanath
'Ramy' Will “Probably” End With Season 4, According To Ramy Youssef
By Brad Witter
UK Viewers Will Have To Wait To Watch The Handmaid’s Tale S5
By Maxine Harrison
Get Even More From Bustle — Sign Up For The Newsletter