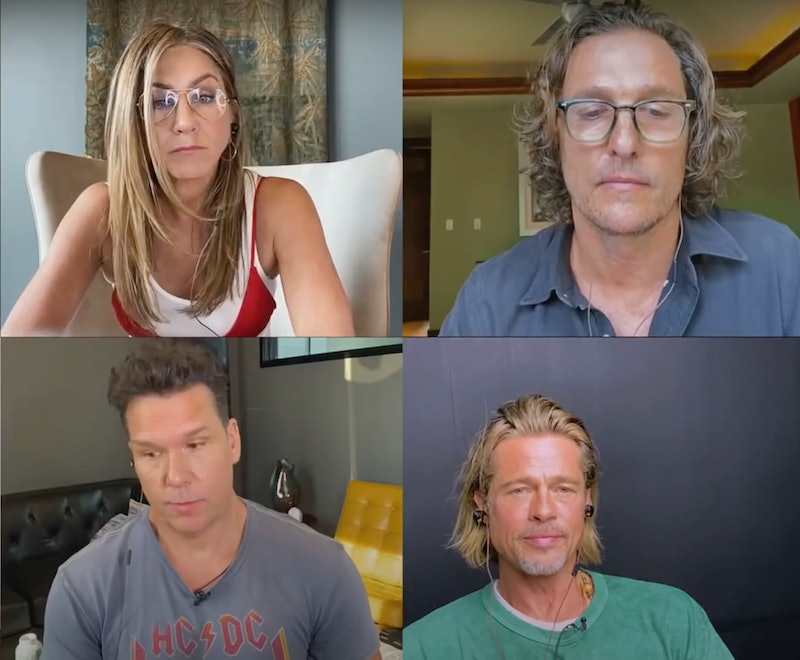 Famous exes Jennifer Aniston and Brad Pitt broke the internet during the Fast Times at Ridgemont High virtual table read last month — and now, another famous spectator has weighed in. Matthew McConaughey appeared on Watch What Happens Live With Andy Cohen on Thursday, Oct. 29, and when a caller dialed in to inquire about any possible "sexual tension" between Aniston and Pitt during the star-studded event, McConaughey laughed about the viral moment and offered his own analysis.

"Could I feel the heat through the screen of Brad? So palpable. Yeah, it was so palpable," the actor joked, adding that he noticed a ton of fan interest about this very topic soon after the event took place. All laughs aside, though, McConaughey maintained that there was no real tension between the two. "No, I actually didn't notice anything through the screen, but that made for a good topic the next day."

With many fans watching from home, the stars took turns reading lines from the 1982 coming-of-age film that featured Jennifer Jason Leigh, Phoebe Cates, Judge Reinhold, and Penn. Alongside Freeman's raunchy narration in his signature baritone voice, Aniston took on the role of Linda Barrett (Cates) while Pitt took on Brad Hamilton (Judge Reinhold). Together, they ran lines from the risqué scene in which Linda emerges from the pool in her red bikini.

Inevitably, the reenactment overwhelmed those who have shipped Jen and Brad together for decades.

While McConaughey has maintained that he couldn't sense any particular spark, the same presumably cannot be said for Roberts. The Pretty Woman actor (who voiced the role of Brad Hamilton's sister Stacy, originally played by Leigh in the film) essentially stole the show with her animated reactions to Aniston and Pitt's read.

"Palpable" sexual tension or not, the A-list event offered the ultimate reprieve during such turbulent times. According to Cook, who hosted the whole thing, the viral pairing was actually unintentional. "I wish I could say that was my plan all along," Cook told Entertainment Tonight in August, revealing that it just happened "as it started to come together." He added of Aniston and Pitt, "They're fascinating people, and also because of the level of talent and philanthropy, when you have fascinating figures like that, of course you want to see them together. That's the magic, right? You want to see that spark."

More like this
Harry Styles Just Split His Pants In Jennifer Aniston’s Face
By Sam Ramsden
What Is Mary J. Blige’s Net Worth? The 9-Time Grammy Winner Is Doing “Just Fine”
By Hugh McIntyre
Taylor Lautner Copped To Finding Jacob "A Little Annoying" In Twilight
By Stephanie Topacio Long
James Cameron May Come To Regret His 'Titanic' Door Experiment
By Stephanie Topacio Long
Get Even More From Bustle — Sign Up For The Newsletter
From hair trends to relationship advice, our daily newsletter has everything you need to sound like a person who’s on TikTok, even if you aren’t.