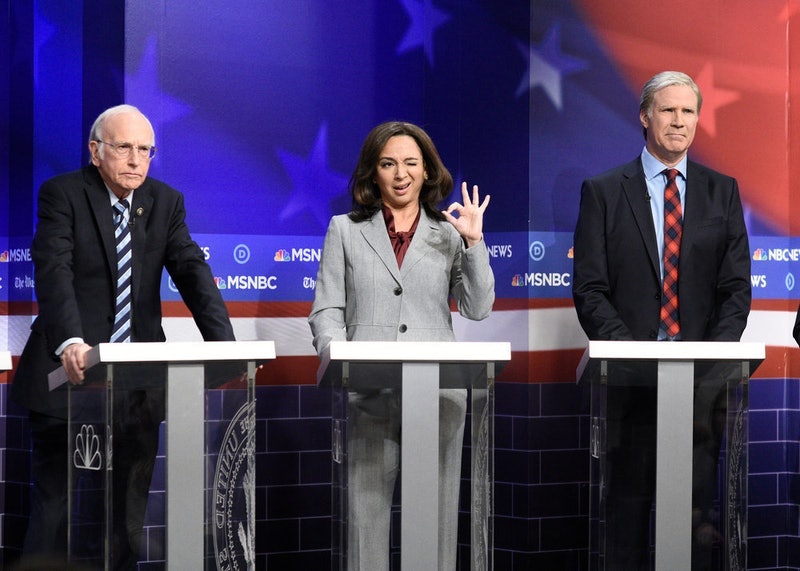 They say you should never meet your idol, but for one SNL member, that warning has proven to be null and void. While speaking with Entertainment Tonight, Maya Rudolph revealed she finally met VP nominee Kamala Harris — just in time for the comedian to pick up her impression of the politician when Saturday Night Live returns. This union has been a long time in the making, given the numerous times Rudolph has impersonated Harris on the late night comedy skit series; however, she had yet to come face-to-face with the California senator until just recently. And it seems the meet up exceeded all of Rudolph's expectations and then some.

"I got to meet her, and she is so fantastic. She is so incredible, she is so energizing and I just feel so good to be associated with someone so positive," Rudolph told ET about the interaction, while admitting that it's definitely put some added pressure on her shoulders to make sure her impersonation of Harris does the senator justice. "I just want to do her proud — just do a good job, no pressure!"

Not that she needs much help in that area. Rudolph just recently nabbed an Emmy win for her portrayal of Harris, taking home the award for Outstanding Guest Actress in a Comedy Series. That being said, the SNL alum still thinks she hasn't quite "nailed" the impression just yet, telling ET, "I definitely tried to make her fun because I do feel that when I see her." Rudolph added that she wants to infuse her version of Harris with joy, noting, "She is just a great human, and I forgot what it felt like to see that and to see something so positive. It feels so good to see her out there."

And the admiration is completely mutual. When Rudolph first debuted her Harris impersonation during the Season 45 premiere last year, the senator tweeted a joke about the parody, indicating that she not only approved of the actor's portrayal, but that she had a great sense of humor about it. "That girl being played by @MayaRudolph on @nbcsnl?" she wrote at the time. "That girl was me."

It's unclear when exactly this hang out session between the two actually took place, though considering that Rudolph confessed to Variety back in August that she had yet to meet Harris, it must've been fairly recently. "I haven’t met her. I’ve never met her," she told the outlet on Aug. 27. Things have clearly changed since then, but unfortunately, we weren't privy to that epic interaction. But at least we'll most likely be able to see Rudolph reprise her role when SNL returns on Oct. 3.