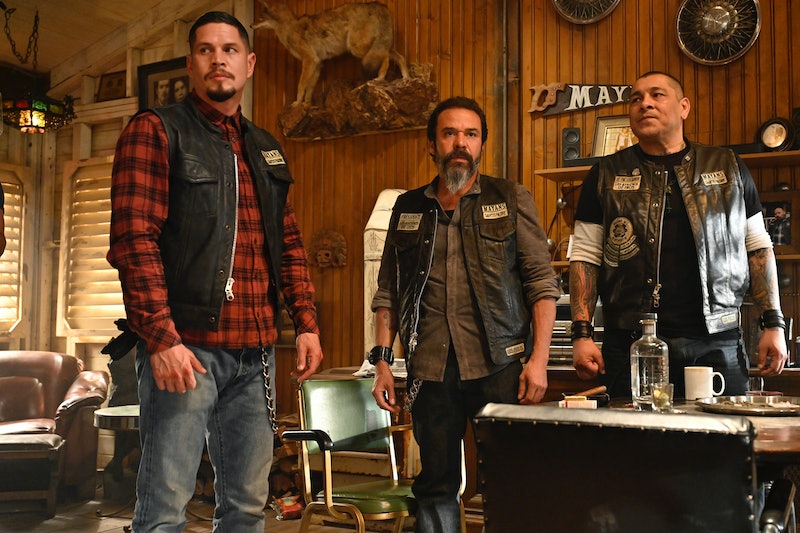 Mayans M.C., the Sons of Anarchy spinoff that follows a rival biker gang in the fictional California town of Santo Padre, has been renewed for Season 4. The FX series is set two and a half years after the events of Sons of Anarchy and follows the life of Ezekiel "EZ" Reyes, a former prospect and newly full patch member of the Mayans M.C., Santo Padre Charter.

When biker drama opened, EZ had recently been released from prison and was prospecting with the Mayans M.C. biker club — while also secretly working as an FBI informant to help take down the Galindo cartel. At the same time, EZ and his brother Angel — who’s a full patch member of the Mayans M.C. — and his brother’s sponsor in the club teamed up to uncover the truth behind their mother’s murder many years earlier, though Angel also has some secrets of his own. By the end of Season 3, allegiances had switched several times over, but there’s still no shortage of hidden motivations and family drama to explore in Season 4. Here’s what we know so far.

Though details about the plot of Season 4 are sparse, co-creator and showrunner Elgin James released a statement saying: “In Season 4, we look forward to diving deeper into each character's truths, exploring the danger of the combustible world they inhabit, and for each writer, cast member and crew to stake out our place as storytellers.” In an interview with Deadline, James teased a bit more about Season 4. "This season, we dealt with consequences, and I think we’re going to continue to,” he said. “I think everything is going to continue to spiral.”

When asked about the possibility of Mayans M.C. running for seven seasons like its predecessor Sons of Anarchy, James responded hopefully, “that’s sort of how we have it planned out, just because that’s the model that we knew.” However, he added that “shows usually don’t run seven seasons anymore, so it may just be one [more] season. We just know, each time we get to live another day, we’re just going to lay it all out.”

Season 4 is of Mayans M.C. will air its first two episodes back-to-back on April 19 at 10 p.m. ET on FX, then stream on Hulu the next day.

No trailer yet, but this post will be updated as more details become available. In the meantime, the existing three seasons of Mayans M.C. are available to stream on Hulu.

More like this
'Succession' Season 4 Will Be An "Absolute Banger" According To Cousin Greg
By Bustle Staff
Everything To Know About 'Cobra Kai' Season 6
By Brad Witter
'The Crown' Season 6 Has Suspended Filming "Out Of Respect" For The Queen's Death
By Bustle Staff
Shonda Rhimes Responded To The Surprise Exit Of A Day 1 'Grey's Anatomy' Figure
By Grace Wehniainen
Get Even More From Bustle — Sign Up For The Newsletter
From hair trends to relationship advice, our daily newsletter has everything you need to sound like a person who’s on TikTok, even if you aren’t.