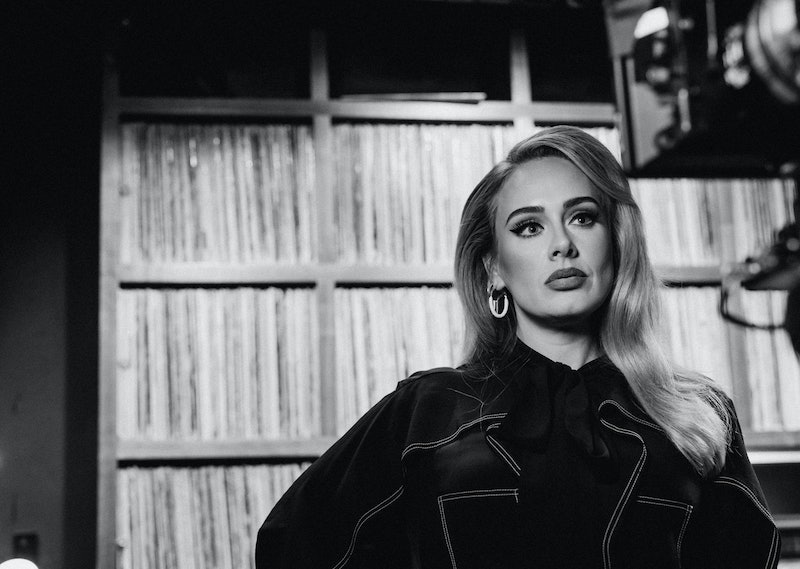 Adele’s highly-anticipated fourth studio album 30 is finally upon us, and with it comes a brand new collection of knock out tracks from the 15-time Grammy winner that are sure to bring on the goosebumps. The first single from the singer’s latest record arrived in the form of “Easy on Me.” The song debuted at the top of the UK singles chart and even broke the Spotify record for the most amount of streams in a single day.

On Nov. 1, the Oscar-winner released the official 30 tracklist on social media, and the song “I Drink Wine” immediately jumped out to fans as a potential favourite despite not yet being released. “I Drink Wine” was later confirmed to be the second single from 30, and Adele debuted the hotly-anticipated song during her CBS TV special Adele One Night Only on Nov. 14, giving fans a first-listen of the track’s emotive lyrics. But, what is the meaning behind Adele’s “I Drink Wine” lyrics?

Per Elle, the song’s lyrics are in reference to her divorce from her ex-husband, Simon Konecki, with whom she shares a young son, Angelo. During a recent CBS interview with Oprah Winfrey, the hitmaker discussed how she coped with the breakdown of her relationship with Konecki while writing her latest album, revealing that she “stopped drinking.”

“That's one great way of really sort of getting to know yourself, is just drinking water and being sober as anything,” she added, while also disclosing that alcohol “took my dad from me.”

Opening up further about her relationship with alcohol, Adele also revealed to Vogue how it played a role in her life during the early days of the lockdown, joking that she was always “a bit hungover on Monday morning.”

She added, “It got earlier and earlier, the drinking... My first emergency run at the grocery store was for Whispering Angel and ketchup. Whispering Angel turned me into a barking dog. It did not make me whisper.”

Speaking to Rolling Stone, Adele shed more light on the meaning behind the album’s second single, revealing that the lyrics of “I Drink Wine” are also about shedding one's ego. “I took everything so personally at that period of time in my life.” She continued, “So the lyric ‘I hope I learn to get over myself’ is like [me saying] ‘once I’ve done that, then maybe I can let you love me.’”

The publication refers to “I Drink Wine” a standout album track with a flair of 1970s Elton John and Bernie Taupin, while the Guardian describes the “fabulously” titled song as “Carole King-ish.”

Take a look at the full “I Drink Wine” lyrics below:

How can one become so bounded by choices that somebody else makes?

How come we've both become a version of a person we don't even like?

We're in love with the world, but the world just wants to bring us down

By puttin' ideas in our heads that corrupt our hearts somehow

Soaking it all up for fun, but now I only soak up wine

They say to play hard, you work hard, find balance in the sacrifice

And yet I don't know anybody who's truly satisfied

But the higher we climb feels like we're both none the wiser (Ah, ah, ah, ah)

So I hope I learn to get over myself

So we can love each other for free

Everybody wants somethin', you just want me

Why am I obsessin' about the things I can't control?

Why am I seekin' approval from people I don't even know?

Cause I need some substance in my life, somethin' real, somethin' that feels true

I hope I learn to get over myself

Oh, I just want to love you, love you for free

Everybody wants somethin' from me, you just want me

Listen, I know how low I can go, I give as good as I get

Oh, I hope in time (Hope in time) we both will find (We'll both find) peace of mind

Well, so I hope I learn to get over myself

Oh, I just want to love you, love you for free, yeah'

Cause everybody wants somethin' from me, you just want me

More like this
Cat Burns Explores A Deeply Personal Struggle In “People Pleaser”
By Catharina Cheung
“I’m Not Here To Make Friends” Speaks To A New Sam Smith Era
By Maxine Harrison
Twitter Is Saying The Same Thing About Beyoncé's Renaissance World Tour
By Shahed Ezaydi
How To Buy Tickets For Beyoncé’s UK Renaissance Tour Dates
By Shahed Ezaydi
Get The Very Best Of Bustle/UK
Sign up for Bustle UK's twice-weekly newsletter, featuring the latest must-watch TV, moving personal stories, and expert advice on the hottest viral buys.