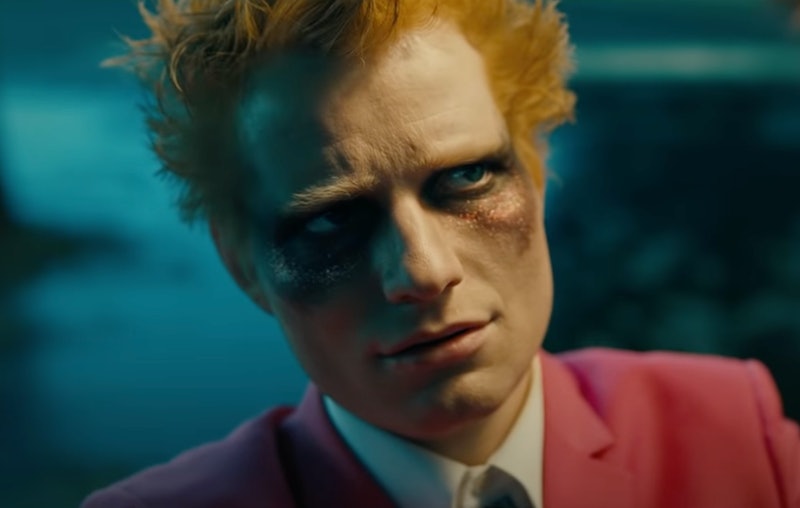 The 30-year-old performer described the song as “really different” in an interview with BBC Radio 1 ahead of its Jun. 25 release. Like most of Sheeran’s back catalogue, “Bad Habits” was a massive success, spending 11 weeks at number one and breaking a new record for the singer.

Sheeran recorded the music video for the song earlier this year in Catford, South East London. He took a theatrical approach, ditching his signature jeans and t-shirt to become a sharp-fanged vampire in a fuschia suit. Not to mention the copious amounts of glittery eyeshadow. Sheeran’s new look got the seal of approval from close friend and collaborator, Taylor Swift, who said “it’s a yes from me.”

As you can probably tell from its name, “Bad Habits” is a song about how vices can take control. Sheeran has always been honest about his experiences with substance abuse. In 2017, he shared on Jonathan Ross that he was forced to take a year off of music after he started “slipping into” the pitfalls of fame. “Mostly, like, substance abuse,” he said. During his year off, he cut out beer from his diet, and ended up losing 50 pounds. Sheeran was also a long-time smoker, something he eventually gave up in 2019.

Sheeran has previously discussed how fatherhood has changed him he is said to have written “Bad Habits” for his one-year-old daughter Lyra, who he said has been the “biggest motivation” to give up his vices for good.

In June 2021, he told Radio 1's Greg James, “As soon as Cherry told me she was pregnant, life shifted, in terms of work and health and what I was putting into my body, be it food or alcohol.”

Appearing on the Late Late Show with James Corden the same month, he confessed “Instead of going to bed at 6 a.m. I'm getting up at 4 a.m. ... It's great, my days are structured. I'm healthier than I've ever been and I'm exercising everyday.”

Below are the lyrics to “Bad Habits” so you can spot the hidden meaning inspired by Sheeran’s own experiences.

Every time you come around, you know I can't say no

Every time the sun goes down, I let you take control

I can feel the paradise before my world implodes

And tonight had something wonderful

Conversations with a stranger I barely know

Swearin' this'll be the last, but it probably won't

I got nothin' left to lose, or use, or do

My bad habits lead to wide eyes starin' at space

Yeah, I was lookin' for a way out, now I can't escape

Nothin' happens after two, it's truе, it's true

My bad habits lead to you

My bad habits lead to you

My bad habits lеad to you

Every pure intention ends when the good times start

Fallin' over everything to reach the first time's spark

It started under neon lights and then it all got dark

I only know how to go too far

We took the long way 'round

And burned 'til the fun ran out, now