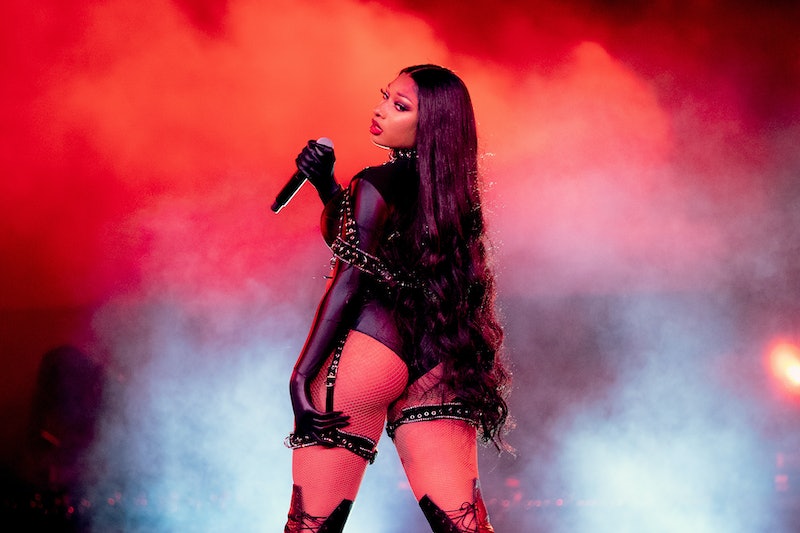 Megan Thee Stallion made her SNL debut in the season 46 premiere with a performance of "Savage" that included calls to protect Black women. Her performance began pretty standard for an SNL musical guest. She hit the stage in an elaborate outfit, backed by four background dancers and giant LED screens flashing bright graphics. But midway through her performance, Megan paused to allow audio from Malcolm X's speech “Who Taught You To Hate?” and activist Tamika Mallory's recent comments about Breonna Taylor's case to take over the speakers. The words of Malcolm X and Mallory also appeared on the screens behind Megan, who periodically punched the air as "Savage" flashed on the screen after particularly powerful quotes. One such punch came after the words "Daniel Cameron is no different than the sellout negroes that sold our people into slavery" filled the air in Studio 8H.

After the excerpts played, the rapper made a personal plea, calling for the protection of both Black women and Black men, stating that she is tired of seeing hashtags about the latter. Her performance ended with the huge LED screens behind her reading "Protect Black Women" as she and her backup dancers raised their fists in solidarity.

More like this
Michael B. Jordan Tackled His "Public Breakup" With Lori Harvey On 'SNL'
By Brad Witter
Who Is Pete Davidson Dating? He & Chase Sui Wonders Got Caught Kissing
By Jake Viswanath
The Black Lotus Staff Has "Had Enough" In The 'White Lotus' Spoof From 'SNL'
By Brad Witter
Linda Ronstadt’s “Long Long Time” Plays A Pivotal Role In The Last Of Us
By Brad Witter
Get Even More From Bustle — Sign Up For The Newsletter
From hair trends to relationship advice, our daily newsletter has everything you need to sound like a person who’s on TikTok, even if you aren’t.