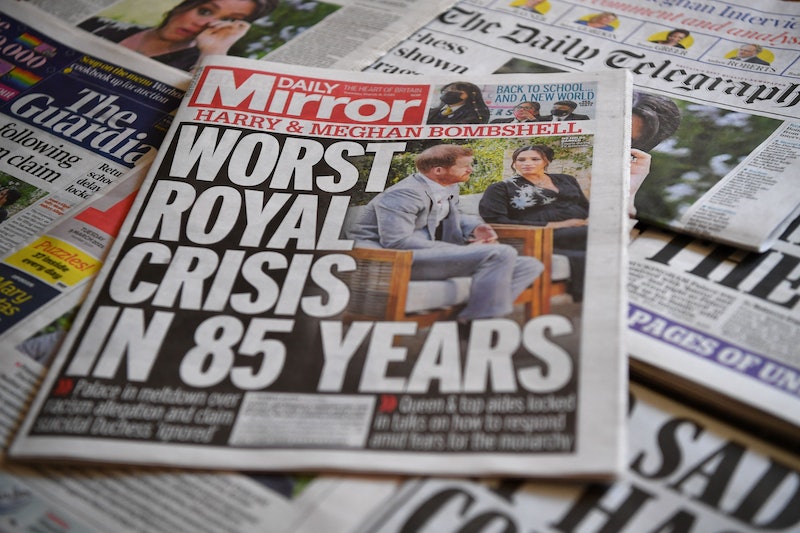 Imagine a world where being a mixed race woman is seen as worse than being associated with a convicted sexual predator. Or being accused of having sex with a victim of human trafficking. Or both. Open the pages of almost any British tabloid and you’ll find yourself there. Last week, the Daily Mirror called Meghan Markle and Prince Harry’s interview with Oprah the “Worst Royal Crisis In 85 Years”, while other tabloids dedicated 25 pages to the tearing down of Meghan’s character.

Clearly, the British media doesn’t think Prince Andrew’s abuse scandal counts as a crisis, or at least not as significant a one as Harry and Meghan giving an interview. So why do the tabloids effectively erase Andrew’s alleged crimes from public consciousness in favour of deriding and vilifying a woman of colour who dares to go against the grain? And what does Andrew’s treatment by the two institutions of the press and the palace tell us about our society?

Prince Andrew’s friendship with convicted sex offender Jeffrey Epstein came under public scrutiny in 2019, after the allegations of sexual abuse made against him by Virginia Roberts Giuffre resurfaced. As early as 2015, she alleged that she was forced to have underage sex with Epstein and Prince Andrew — a claim that the Duke of York has denied.

In 2019, Prince Andrew defended his friendship with Epstein in an interview with Emily Maitlis. The conversation revealed a hubristic individual seemingly obsessed with self-preservation, enjoying the same level of entitled privilege his family shares and exploits to protect him. To this day, the royal family has never publicly investigated Prince Andrew’s association with Jeffrey Epstein. And he refuses to comply with the FBI’s investigation, despite stating he would in the Newsnight interview and claiming he had offered to do so in a statement.

Fast forward to 2021 and the spotlight on Prince Andrew has almost entirely faded. At the same time, the hatred towards Meghan continues apace, with negative headlines about the Duchess vastly outweighing positive ones. Having retired from royal duties in 2019, the Duke of York managed to escape any type of meaningful scrutiny from tabloids for allegedly having sex with a minor. By comparison, Meghan faced derision for wearing trousers, sitting, and eating avocados. The latter of which saw a British tabloid claim her preferred snack was “fuelling human rights abuses, drought and murder.”

Prince Andrew embodies the fundamental flaws of the institution he inhabits: hubris, abuse of power, and white supremacy.

Earlier this month, The Times revealed allegations of bullying against the Duchess of Sussex. Anonymous former members of Meghan and Harry’s palace staff claimed Meghan had "destroyed" the confidence of a young woman who worked for them. The story, which speaks to the racist trope of an “aggressive Black woman,” gained significant traction and prompted Buckingham Palace to launch an investigation. In 2019, the Express reported that Prince Andrew was involved in a verbal dispute with an aide that required Prince Charles to intervene. Nothing happened. There was no investigation and no intense scrutiny of his character.

Similarly, while it was also reported that Prince Andrew met Libyan dictator Muammar Qaddafi in 2008, this faced no backlash, unlike reports that a pair of earrings Meghan wore were a gift from a Saudi prince accused of murder. This again reinforces racist stereotypes about women of colour, continuously linking her to crime and human rights abuses. Meanwhile, by avoiding racist press scrutiny and using power to avoid complying with the investigation, Prince Andrew embodies the fundamental flaws of the institution he inhabits: hubris, abuse of power, and white supremacy.

In the Oprah interview, we learned details of the Palace’s indifference to Meghan — its purported refusal to support her when she was struggling with suicidal ideation and alleged removal of the Sussexes security detail. For Prince Andrew, scandals have apparently been suppressed, duties have been abdicated and his royal titles have been kept. Meanwhile, the removal of Harry and Meghan’s is reportedly up for discussion (per the Times) and was the subject of a front-page Daily Mail poll on March 10.

When asked by Oprah if she had any regrets from her time in the royal family, Meghan said hers was “believing them when they said I would be protected. I believed that.” Given the way the palace has apparently protected other royals, it wasn’t naïve to believe so — but the lack of protection afforded to Meghan has clearly never been the same level as that given to Prince Andrew. Unlike Harry and Meghan, The Sun reports Andrew retained his taxpayer-funded security guards after intervention from the Queen, despite his retirement from royal duties.

Buckingham Palace has issued a statement in Andrew’s defence. It has never done the same for Meghan Markle

Buckingham Palace has issued a statement in Andrew’s defence. It has never done the same for Meghan Markle, despite her receiving intensely negative and frequently racist press coverage and public attention. She also claims the palace refused to contradict reports that she made the Duchess of Cambridge cry, when Meghan says the opposite was true —Kate had made her cry.

Last week, when Buckingham Palace gave its official response to Meghan and Harry’s accusations that a member of the royal family had been racist about Archie, instead of explicitly condemning racism it stated the accusations were “concerning” but “recollections [of the incident] may vary.” This proves once again that they would prefer to protect their own over somebody who symbolises the “Other,” even when it comes to allegations of racism. So what does it say about a family that is willing to support an alleged sex offender but leave a Black woman to face the wrath of the press and suffer from suicidal thoughts apparently without support?

Perhaps the worst thing about this kind of coverage is that it works — racism sells. The British media itself is institutionally racist, whatever it may say. Meghan — photogenic, polarising, and mixed race — is an easy way of creating engagement, filling empty columns and generating quick clicks. The conversation is designed to generate revenue for the media organisations whose business model is an endless cycle of racism, anti-wokery, and more racism, at the expense of a Black woman’s mental health.

Though told through the prism of the royal family, the way Prince Andrew has been protected speaks to a wider point about how power and whiteness are often shields from consequence. A middle-aged affluent white man shaped by exceptionalism, Prince Andrew is a symbol of the untouchable elite. So instead the tabloids target a mixed race Black woman and entrench pre-existing discrimination in society, while the palace seemingly stands by.

The contrast in the palace’s treatment of Meghan and Prince Andrew is symptomatic of a larger theme of protecting one’s own — those who are blood royals and conform to their norms. There was no real desire to rebrand itself as a “modern monarchy” as exemplified by their refusal to publicly investigate the racism alleged in the interview. By protecting Prince Andrew, who is white and was born into the family, but not a mixed race Black woman or her child, they are complicit in racism.

As Prince Andrew’s treatment evidences, for the palace and the press at least, there’s nothing worse than a Black woman with a voice.