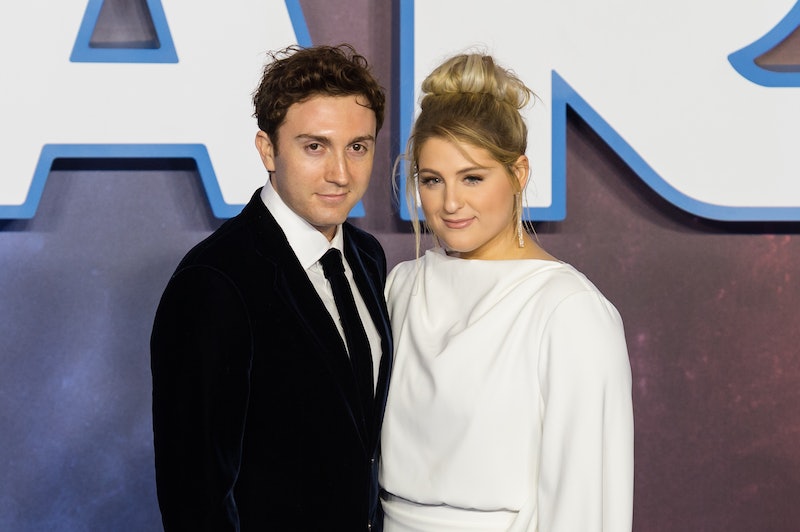 Halloween is still weeks away, but Meghan Trainor and Daryl Sabara's pregnancy announcement skipped straight to Christmas. On Wednesday, Oct. 7, Trainor told fans that she is pregnant with the couple's first child on Instagram, sharing a sonogram of her family's new addition surrounded by festive ornaments and wreaths. "You all know how long I’ve wanted this!!!!," she wrote. "@darylsabara and I are so beyond happy and excited to meet this little cutie early next year! WE’RE PREGNANTTTTT!!!"

Sabara also shared the picture on his Instagram, writing, "I love you @meghan_trainor and I can't wait to start a family with you." Yep, the little boy from Spy Kids is all grown up and having his own child, or as some may call it, a new Spy Kid.

The couple also announced their pregnancy with an appearance on Today, something Trainor had been dreaming of for quite some time. As she told host Hoda Kotb, she wanted her to be one of the first people she shared the big news with. "We were thinking about who do I tell first, and I was like, I told Hoda since I was 19 going to The Today Show (that) I will have the most babies in the world," she said. "It finally happened and we're so excited." She and Sabara even wore matching Kotb hoodies for the occasion.

The "No" singer didn't reveal any information about the baby's sex or an exact due date, but did share that she was about halfway along in her pregnancy, which she said has been "very easy so far" and made her realize just how strong women really are. "I do feel like I'm learning new things every single day," she said. "I realized how amazing women are... women are superheroes. This is crazy."

Trainor has been very vocal about her desire to have kids in the past. Only a month after she married Sabara in December 2018, she told PEOPLE that she was ready to start their family, but she had to put her music commitments first. “If we could do it how we want to, we’d be, like, totally preggo right now!," she said. “We’re both so excited for it. We both constantly watch baby YouTube videos and lessons on like, 'How to take care of an infant.'"

In October 2019, Trainor told E! News that she wanted "a bunch" of kids. However, if she had it her way, she'd have triplets and be done with pregnancy for good. "I want to get it all done at one time and be like, pop them in there," she said. "Let's knock it out. Let's do it at once. I want twins or triplets. I want a doctor to put them in, you know?"

More like this
20 Years Later, Kelly Clarkson & 'American Idol' Judges Reunite For Her Hollywood Walk Of Fame Star
By Radhika Menon
Netflix Reveals First Look At Wednesday In The 'Addams Family' Spinoff Series
By Bustle Editors
Drew Barrymore & Justin Long’s Reunion On Her Talk Show Had Her In Tears
By Radhika Menon
Kenan & Kel Just Reunited At The 2022 Emmys & Twitter Is Overjoyed
By Grace Wehniainen
Get Even More From Bustle — Sign Up For The Newsletter