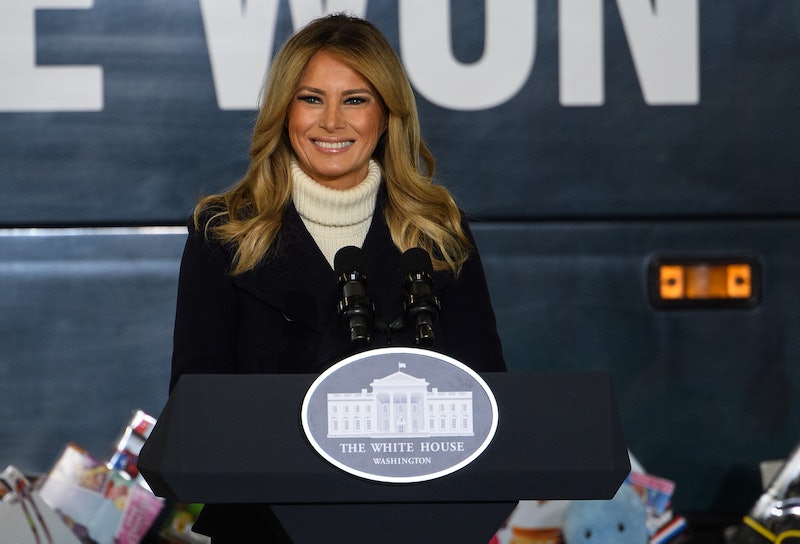 Melania Trump didn't quite get the reaction she was expecting after releasing her statement about the insurrection on Capitol Hill, with many people on social media calling her out for victimizing herself. Trump shared the letter on Monday, Jan. 11, five days after a mob of white supremacists, motivated by the President himself, stormed the Capitol in an attempted coup to disrupt Senate hearings that would certify the election results. The riots killed five people, including a Capitol police officer.

In her statement, Trump said that she was "disappointed" by what took place on Jan. 6 and paid tribute to the victims. "Our Nation must heal in a civil manner," she said. "Make no mistake about it, I absolutely condemn the violence that has occurred on our Nation's Capitol. Violence is never acceptable." However, she went on to target unnamed people and claim that they were making false accusations about her. "I find it shameful that surrounding these tragic events there has been salacious gossip, unwarranted personal attacks, and false misleading accusations on me — from people who are looking to be relevant and have an agenda," she said.

Trump did not specify who she was speaking to, but some believe that she was referring to her former assistant and friend Stephanie Winston Wolkoff, who recently wrote a scathing article claiming that she is "complicit in the destruction of America." Immediately, Twitter users condemned the First Lady for calling out anonymous targets that only affect her rather than focusing on the insurrectionists.

Trump received even more flack for what she was reportedly doing as the mob was attacking the Capitol. According to CNN, the First Lady was overseeing a professional photoshoot of interior design items inside the White House — and no, this is not a joke. "Photos were being taken of rugs and other items in the Executive Residence and the East Wing," a source told the outlet. According to Vanity Fair, Trump has expressed interest in writing a coffee table book about how she decorated the White House, which could be a possible explanation for her supposed choice to zero in on rugs rather than the insurrection.

Trump did not address the reports of her whereabouts during the attack in her statement. In fact, CNN reported that she initially decided not to comment on the riots at all, attributing her choice to being "checked out" before leaving the White House. "She just isn't in a place mentally or emotionally anymore where she wants to get involved," the source said.