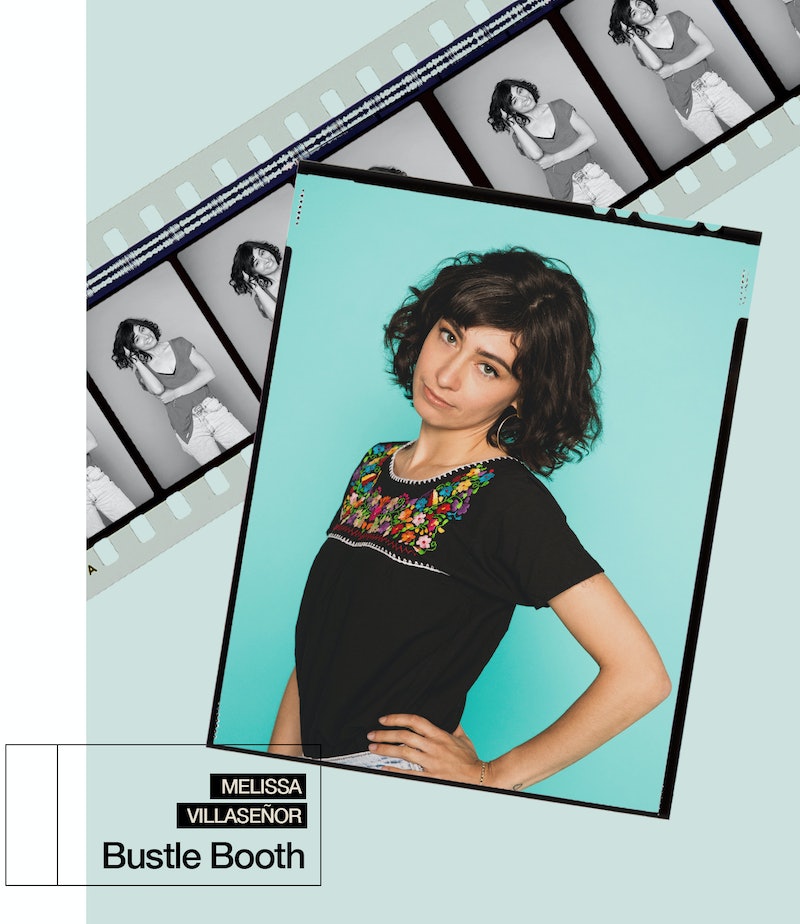 Melissa Villaseñor made her name as SNL’s resident Dolly Parton and Lady Gaga impersonator but now she’s ready to introduce you to herself as Melissa, the California girl. Villaseñor knows she doesn’t fit the stereotype, which she describes “blonde hair and big boobies” (or, in the words of California girl scholar Katy Perry, “daisy dukes and bikinis on top”). But she is a California-born comedian, and titling her cross-country comedy tour California Girl just felt right. “I’m a silly funky gal and I think I'm bringing a new meaning to the phrase,” she tells Bustle.

The tour is the latest step in Villaseñor’s comedic ascendance. In addition to serving as SNL’s go-to impressionist for the past five seasons, she’s found time to voice animated characters on everything from Toy Story to Family Guy, and guest starred on shows like Barry and Awkwafina Is Nora From Queens. All this has made her voice instantly recognizable — and landed her even more gigs, like hosting this year’s Independent Spirit Awards. It’s tempting to think that Villaseñor is an overnight success, but her career path has not always been smooth.

The SNL star, now 33, started doing stand-up comedy at 15. Looking back, she wishes she took the whole thing far less seriously. “I was just always in my Toyota Corolla crying and listening to Regina Spektor and it’s just like, ‘You have no problems, chill out,’” she says. “I was so intense about my career. I was always in a rush and I wasn't enjoying the process that much.” Villaseñor was 21 when she first tried out for SNL, and though she felt the audition went great, she didn’t end up landing the coveted gig. She was crushed. “I felt like my career [was] over. There was nothing else I wanted so much.”

She looked for alternatives to a career in comedy and dabbed in volunteering, but she found her way back to the stage when she made it to the semifinals of America’s Got Talent with her eerie Natalie Portman and Miley Cyrus impressions. She also continued to audition for SNL until she was cast in 2016. “I wasn’t even nearly ready for that show [at 21],” she says. “As the years went by, I developed more of my point of view and comedy style and confidence and self-esteem, and by the time SNL came around I was feeling more content with who I am.”

That growth also led to the creation of California Girl, which will be her most personal work to date. It’s a celebration of Villaseñor’s family (she describes her parents as “silly goofs”), and features impressions of her grandmother alongside her usual celebrity impersonations. She’s eager to begin her cross-country road trip — naturally, with her dog Penny in tow — and share some hilarious personal stories. “I wanted to have something very me,” says Villaseñor. “I’m just a silly, sunshine girl with voices.”

Get to know more about Villaseñor — including her favorite underrated reality TV show — below.

Hot or iced coffee with a little oat milk and cinnamon

“Big Gulps, huh? See ya later!” from Dumb and Dumber

Seeing the confirmed schedule for my tour this summer. It feels like a miracle. We didn’t know if standup comedy would come back.

More like this
Hannah Khalique-Brown Has Her Sights Set On 'Strictly'
By Frances Stewart
At 14, Kate Berlant Had A Wheelie Backpack & One Line In 'Lizzie McGuire'
By Samantha Rollins
What Working At Marvel Is Really Like, According To A 'Ms. Marvel' Co-Creator
By Gretchen Smail
Natalia Dyer Opened Up About Steve & Nancy’s “Lovely” ‘Stranger Things’ 4 Dynamic
By Grace Wehniainen
Get Even More From Bustle — Sign Up For The Newsletter