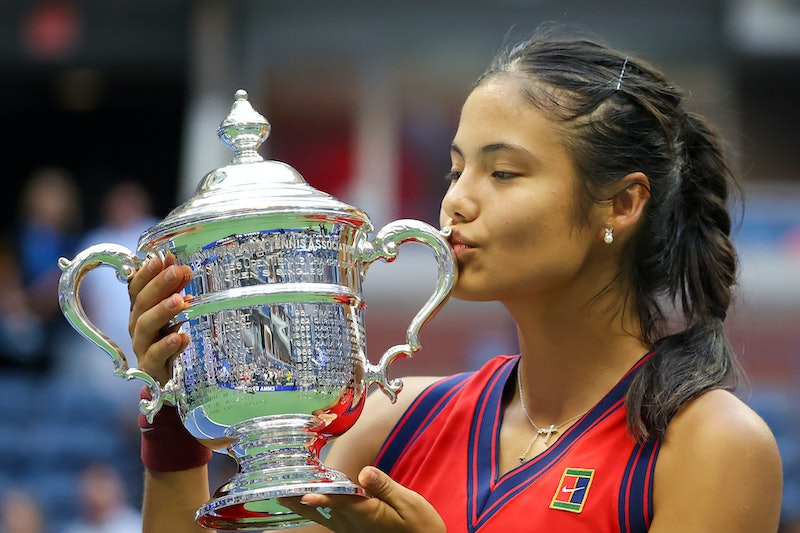 Great Britain has its first women’s tennis Grand Slam winner in 44 years after Emma Raducanu’s historic victory at the 2021 U.S. Open on Saturday, Sept. 11 — but the tweets and memes about the breakout star don’t focus just on her athletic achievement. While basking in her victory, many fans delighted in calling out TV host Piers Morgan, who had previously criticized Raducanu for not being tough enough after she pulled out of Wimbledon in July. The messages made it clear that they had not forgotten his comments and weren’t OK with his more recent claims that his “pep talks” helped her win.

Raducanu, 18, began her unbelievable ascent at Wimbledon in June, where she was thrust into the national spotlight as she unexpectedly reached the fourth round in her Grand Slam debut. Her fairy-tale run, however, was cut short on July 5 when she began to struggle to breathe in the middle of her match against Australia’s Ajla Tomljanovich and was advised by medical staff not to continue. In the moment, commentator and tennis great John McEnroe speculated that the pressure of her first major tournament had gotten to be “a little too much” for the young star, and Morgan then piggybacked off of the idea while slamming her withdrawal. He called her exit “not ‘brave’, just a shame” in a tweet and added she should “seek [McEnroe’s] advice on how to toughen up.”

Raducanu later wrote on Instagram that the “whole experience caught up with [her],” plus told the BBC that the problem was possibly a “combination of everything that has gone on behind the scenes in the past week and the accumulation of the excitement, the buzz.” However, as the U.S. Open got going in August, she again outperformed expectations and ultimately made it to the final on Sept. 11, where she defeated fellow teen sensation Leylah Fernandez of Canada, 6-4, 6-3. Afterward, many fans saw an opportunity to gloat, and they called out Morgan’s previous comments about her mental fortitude just months before.

Meanwhile, some called Morgan a bully, highlighting how often he’s used his platform to criticize women of color like Raducanu, who is of Chinese and Romanian descent. One pulled up past tweets he’d written about Naomi Osaka, Simone Biles, and Meghan Markle to make their point.

Others gleefully suggested that Morgan eat a slice of humble pie in the wake of Raducanu’s victory.

As for Raducanu, she’s just basking in her victory. “We are taking her HOMEEE!!!” she wrote of her trophy on Instagram on Sept. 12.

More like this
'Breaking Bad' Duo Walt & Jesse Are Back — In This Super Bowl Commercial
By Jake Viswanath
Dorothy Wang & Morgan Stewart Were The Ultimate BFFs On 'RKOBH'
By Sophie McEvoy
Twitter Is In Awe Of Taylor Swift’s “Lavender Haze” Music Video
By Jake Viswanath
David Beckham’s Controversial Qatar Deal Skyrocketed His Net Worth
By Catharina Cheung
Get Even More From Bustle — Sign Up For The Newsletter
From hair trends to relationship advice, our daily newsletter has everything you need to sound like a person who’s on TikTok, even if you aren’t.