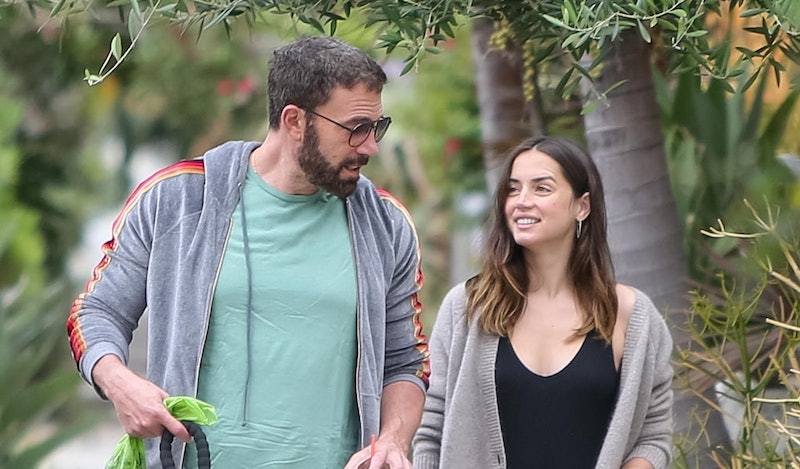 Celebrity couple Ben Affleck and Ana de Armas are no more, marking the end of the paparazzi snapshots of their Dunkin' Donut runs and strolls around town. According to People, the two called it quits after nearly a year together, with a source revealing that the breakup was an "amicable" one. As is the case with all amicable splits, Affleck has since discarded a life-sized cut-out of De Armas from his home, which quickly caused a stir on Twitter.

On Jan. 18, the Ana de Armas Updates Twitter account shared an image of a man throwing a cardboard version of the Knives Out actor into the trashcan outside of Affleck's residence. The unidentified man is presumed to be Affleck's actor brother, Casey. In terms of its origins, Affleck first obtained the cutout last June. De Armas apparently conspired with Affleck's three children Violet, 14, Seraphina, 11, and Samuel, 8 — to prank the actor by leaving it on the front lawn.

The Daily Mail even obtained snapshots of the trio playing with the poster last June. At the time, a source told People that it was important to Affleck that his children — whom he shares with ex-wife Jennifer Garner — get to know De Armas.

Now, the life-sized rendering of the 32-year-old star has captivated the Twitterverse, with one user lamenting the wastefulness of throwing away such an object.

Elsewhere, others shared their thoughts about the breakup and called on people to respect Affleck's privacy at this time.

Affleck and De Armas began dating around March 2020. The two met on the set of their upcoming psychological thriller film Deep Water, which follows a husband who allows his wife to have affairs in lieu of a separation. When her lovers disappear, he becomes a prime suspect. The film also stars Jacob Elordi and Finn Wittrock. "Their physical chemistry was so intense on set," a source previously told People about the two. "It's all anyone could talk about."

More like this
Matt Hancock's “Cringe” Jungle Karaoke Left Twitter Reeling
By Sam Ramsden
Twitter Is Very Torn About The Winner Of 'Dancing With The Stars' Season 31
By Jake Viswanath
Twitter Is Saying The Same Thing About Jill Scott Winning 'I’m A Celeb'
By Sophie McEvoy
The 'Love, Lizzo' Harry Styles Scene Is Just 1 Moment That Made Fans Feel Seen
By Brad Witter
Get Even More From Bustle — Sign Up For The Newsletter