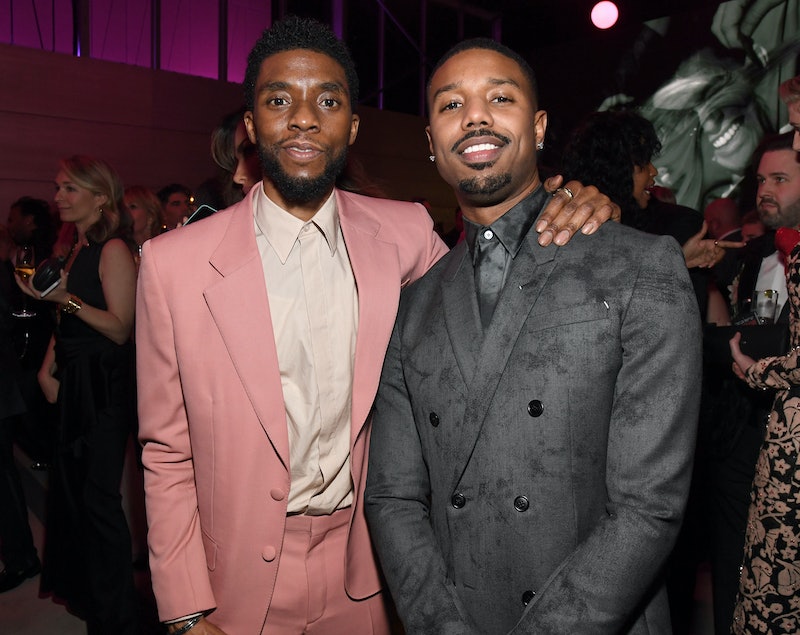 Hollywood is continuing to remember Chadwick Boseman after he shockingly died of colon cancer. Since the news of his death was confirmed on Friday, Aug. 28, many fans, celebrities, and co-stars have been paying tribute to the actor on social media. And now, Black Panther star Michael B. Jordan has honored Chadwick Boseman with a tribute fit for a king.

Late on Monday, Aug. 31, Jordan remembered his co-star and dear friend by sharing a slideshow of images of him and Boseman on Instagram. The actor began his emotional message by explaining that he has been "reflecting on every moment, every conversation, every laugh, every disagreement, every hug" that he had with Boseman, who he says "paved the way" since Jordan was 16 years old, when he took over Boseman's role on All My Children. "You showed me how to be better, honor purpose, and create legacy," he said. "And whether you’ve known it or not… I’ve been watching, learning and constantly motivated by your greatness." He added that he understood why Boseman had told him in one of their last conversations that the two were "forever linked."

Jordan continued, saying that Boseman's legacy, including the "legends and heroes that you’ve shown us we are," will live on forever, but that he only now understands how impactful the actor actually was. "You never lost sight of what you loved most," he wrote. "You cared about your family, your friends, your craft, your spirit. You cared about the kids, the community, our culture and humanity. You cared about me. You are my big brother, but I never fully got a chance to tell you, or to truly give you your flowers while you were here."

Jordan repeatedly punctuated his tribute with one apt phrase: "I wish we had more time." Now, he's more aware than ever that time is short with the people you love. "I’m gonna miss your honesty, your generosity, your sense of humor, and incredible gifts," he concluded, before citing one of his most famous Black Panther lines. "I’m dedicating the rest of my days to live the way you did. With grace, courage, and no regrets. 'Is this your king!?' Yes . he . is! Rest In Power Brother."

Jordan's post joins those of other Black Panther stars who have paid tribute to Boseman, including Danai Gurira, director Ryan Coogler, and onscreen mother Angela Bassett.