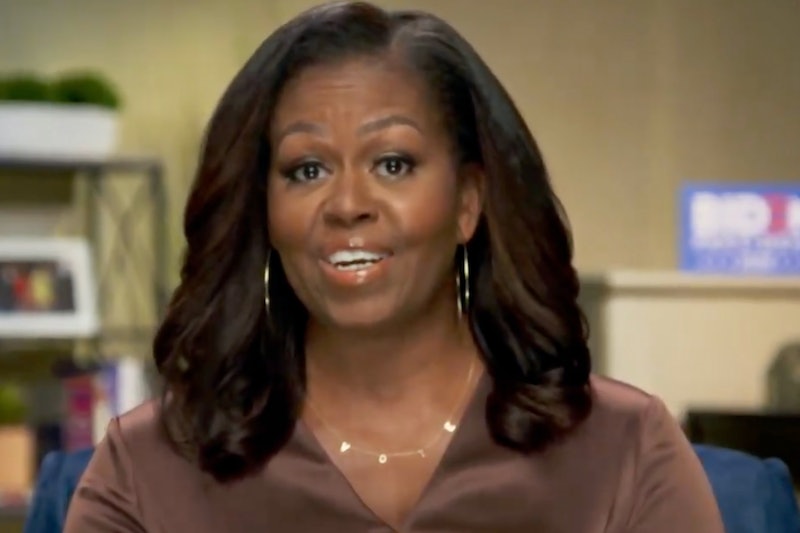 The former First Lady isn't holding back about what's at stake with the 2020 presidential election. In a passionate speech from the first night of the Democratic National Convention, Michelle Obama said Donald Trump has proven he can't do the job of president while encouraging Americans to vote in the upcoming election. And it was the standout speech of the night — and maybe even the entire convention.

Obama began her speech by acknowledging that "it's a hard time" for every citizen, which makes it more important than ever for everyone to vote and fight for change. "I am here tonight because I love this country with all my heart, and it pains me to see so many people hurting," she said. After listing the many issues that the country is currently facing — including the ongoing coronavirus pandemic, mass unemployment, and the fight against systemic racism and police brutality — Obama laid out the case against our current president, saying plainly that President Trump is not the leader that America needs in this moment.

"Let me be as honest and clear as I possibly can. Donald Trump is the wrong president for our country," she stated. "He has had more than enough time to prove that he can do the job, but he is clearly in over his head. He cannot meet this moment. He simply cannot be who we need him to be for us. It is what it is."

While she acknowledged that her statement may be considered controversial, noting that "we live in a nation that is deeply divided, and I am a Black woman speaking at the Democratic Convention," Obama explained that she feels compelled to speak up. "You know I hate politics. But you also know that I care about this nation. You know how much I care about all of our children," she said. "So if you take one thing from my words tonight, it is this: if you think things cannot possibly get worse, trust me, they can; and they will if we don't make a change in this election."

In addition to endorsing former vice president Joe Biden, Obama's speech enumerated all of the ways that she feels the current administration has let the country down in this tumultuous time. "More than 150,000 people have died, and our economy is in shambles because of a virus that this president downplayed for too long. It has left millions of people jobless," she explained.

She continued, citing police violence against Black people, and the refusal of Trump's administration to do anything about it, saying, "And here at home, as George Floyd, Breonna Taylor, and a never-ending list of innocent people of color continue to be murdered, stating the simple fact that a Black life matters is still met with derision from the nation's highest office." Obama added that in addition to all of these crises that the American people are facing, citizens also feel no sense of comfort or guidance from Trump or his administration. "Whenever we look to this White House for some leadership or consolation or any semblance of steadiness, what we get instead is chaos, division, and a total and utter lack of empathy."

In order to fight back against that "lack of empathy" and pursue the a better future, Obama encouraged Americans to vote for Biden — even though she noted that "folks who know they cannot win fair and square at the ballot box are doing everything they can to stop us" from doing so. "We have got to vote like we did in 2008 and 2012," the former First Lady stated, warning of voter suppression efforts that citizens will undoubtedly be faced with come November. "We've got to vote early, in person if we can. We've got to request our mail-in ballots right now, tonight, and send them back immediately and follow-up to make sure they're received," she said, alluding to the delays in the USPS that could keep thousands of mail-in ballots from reaching their local election offices in time.

Noting that Americans have "already sacrificed so much this year," Obama concluded her speech by stating that it is "up to us to add our voices and our votes to the course of history" and fight for empathy once more. "This is who we still are: compassionate, resilient, decent people whose fortunes are bound up with one another," Obama said. "And it is well past time for our leaders to once again reflect our truth."