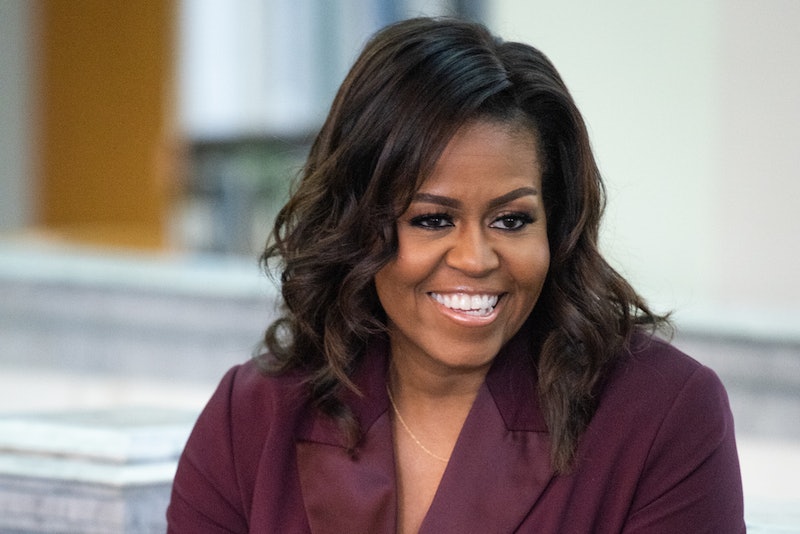 Michelle Obama is one of the most influential women in the world, but sadly, not even being First Lady protected her from experiencing racism in her day to day life. While speaking with her longtime friends Kelly Dibble, Denielle Pemberton-Heard, and Sharon Malone on her podcast, Michelle Obama opened up about experiencing racism while she was First Lady, and the way that Black women are viewed by the world around them.

"What the white community doesn't understand about being a person of color in this nation is that there are daily slights," Obama said on the August 26 episode of The Michelle Obama Podcast. "In our workplaces, where people talk over you, or people don't even see you." She then recalled an incident that occurred in an ice cream parlor with Pemberton-Heard and Obama's two daughters, Sasha and Malia, during her time as First Lady. "We had just finished taking the girls to a soccer game. We were stopping to get ice cream and I had told the secret service to stand back, because we were trying to be normal, trying to go in," she recalled.

"There was a line, and... when I'm just a Black woman, I notice that white people don't even see me. They're not even looking at me," Obama continued. "So I'm standing there with two little Black girls, another Black female adult, they're in soccer uniforms, and a white woman cuts right in front of us to order. Like, she didn't even see us." The former First Lady revealed that the girl working the ice cream counter almost took the white woman's order before Obama said something and called her out for cutting in line.

"So I stepped up and I said, 'Excuse me? You don't see us four people standing right here? You just jumped in line?'" Obama recounted, adding that the woman "didn't apologize" for her actions and "never looked me in my eye" at any point during their interaction. "She didn't know it was me," she continued. "All she saw was a Black person, or a group of Black people, or maybe she didn't even see that. Because we were that invisible."

Unfortunately, Obama explained that she could tell "a number of stories like that" where she has been treated as if she were invisible, despite being the First Lady. "When I've been completely incognito during the eight years in the White House, walking the dogs on the canal, people will come up and pet my dogs, but will not look me in the eye. They don't know it's me," she explained. "That is so telling of how white America views people who are not like them, like we don't exist. And when we do exist, we exist as a threat. And that's exhausting."

As a Black woman in America, Obama also stressed the importance of having other Black women that she could turn to and lean on at different points in her life. "My girlfriend group, while it is diverse, it has been so important for me to have Black women in my crew," she said. "There's just a certain relief that comes when you don't have to walk into your friend group and explain yourself."

Especially in the wake of the ongoing Black Lives Matter movement and the deaths of Black people at the hands of police, Obama said she and her friends have made a point to reach out and check in with each other as often as possible. "My group of female friends aren't calling me to say, 'What can I do?' They're calling me to say, 'How you doin' girl? Let's talk,'" she said.