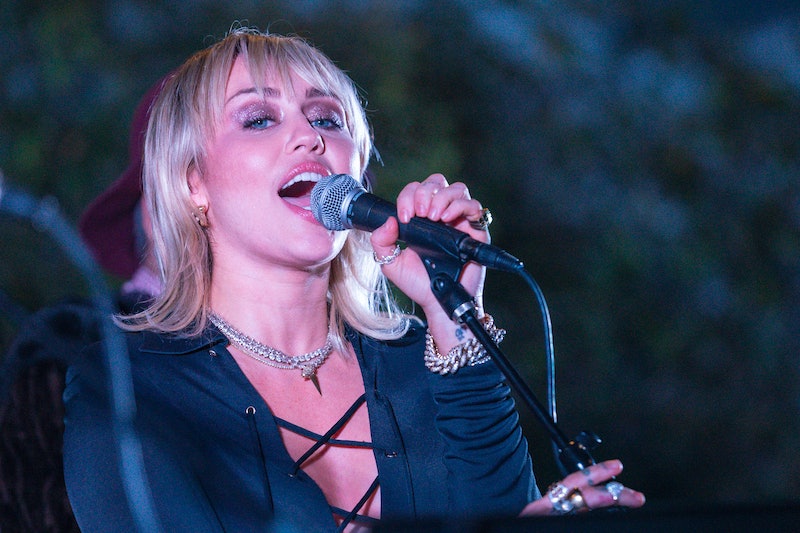 It's Miley, b*tch. As part of her MTV Unplugged Backyard Sessions on Friday, Oct. 16, Miley Cyrus performed a cover of "Gimme More" by Britney Spears that offered an unexpected new take on the 2007 pop classic. Wearing an all-zebra print ensemble, oversized sunglasses, and her signature red lipstick, the singer joined her band — The Social Distancers, appropriately wearing masks for the performance — for an acoustic, country-rock inflected take on Spears' iconic single.

"You got me in a crazy position. If you’re on a mission. You got my permission," Cyrus wrote on Instagram, quoting the song's lyrics alongside a clip from her performance. The singer also tagged Spears and MTV in her post; while the pop star didn't comment on Cyrus' interpretation of the song, her younger sister, Jamie Lynn Spears, gave her seal of approval in the comments section, with a simple fire emoji. Several other celebrities also praised Cyrus for her cover, including Vanessa Hudgens, who shared her speechless reaction in the comment section. "Oh. Wow. Wow. Wow," the High School Musical star wrote.

Cyrus' guitar-centric take on "Gimme More" is fitting, considering the singer has long been open about her love of both Spears and classic rock music. "I had the most weird hodgepodge of Britney Spears, ’NSync, Metallica and Hilary [Duff]," Cyrus told Variety about the posters on her walls growing up. "I had Joan Jett and Pat Benatar. You should’ve seen my face when Britney covered 'I Love Rock ’n’ Roll' in Crossroads. I melted down. That scene was the father, the son and the Holy Spirit all in one room. I actually lost my mind. That was worlds colliding beyond what I could have ever dreamed of."

As a lifelong fan of Spears, Cyrus has also been an outspoken supporter of the #FreeBritney movement, and has even been known to yell "Free Britney" at her concerts. "It’s a 'treat others the way you wanted to be treated' kind of thing," she told iHeartRadio in August about her public declarations of support for the singer, who is currently in the middle of a conservatorship dispute with her father. "I definitely don’t know her personally enough to know any of the details. I scream a lot of things at my show. I also think Britney, like anyone else, should have the freedom to live the life that’s most authentic to her."

And Cyrus has also revealed that Spears and her music is actually a big influence on her upcoming album, which she described as a mix of pop and metal. "I think the first single comes with a lot of pressure because it does kind of show everyone where you’re going," she told French radio station NRJ in September, per Consequence of Sound. "But again, in my sets, I cover Britney Spears to Metallica, so my record will be reflective of who I am, which is just kind of all different pieces of inspiration and influence."

In addition to covering "Gimme More," Cyrus' first Backyard Session featured a performance of "Midnight Sky," covers of The Velvet Underground and Pearl Jam, and a duet performance with her younger sister, Noah Cyrus. "We got so high we saw Jesus," the singer wrote on Instagram, alongside a photo from the sisters' duet. (The caption is a reference to Noah's song, "I Got So High I Saw Jesus," which they performed together.)

"I told Miley next years [sic] gonna be our b*tch and she said 'why wait til next year,'" Noah wrote on Instagram, alongside her own post about the duet. "I love you so much."