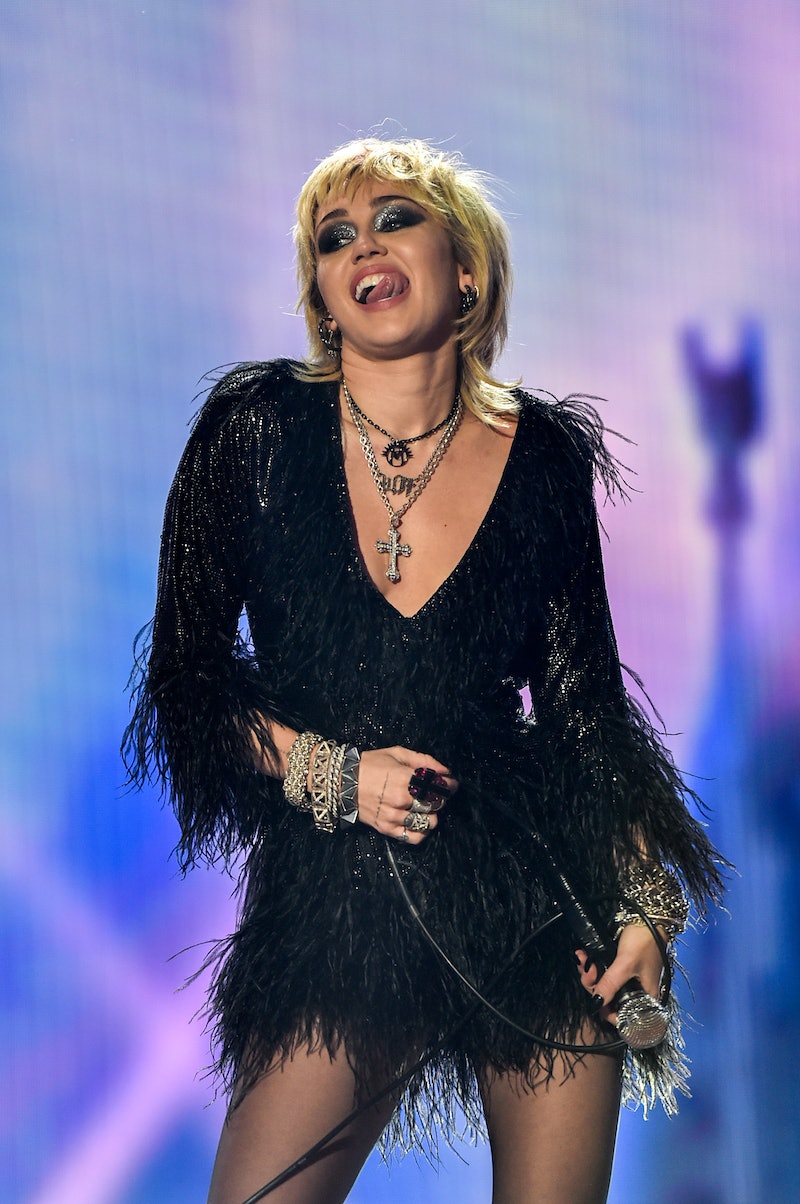 To hype the release of the Kid Laroi’s “Without You” remix, Miley Cyrus told fans to send the song to an ex and then send her their reaction. The Plastic Hearts singer features on the heartbreak-heavy track, so many were happy to take her up on the challenge. In fact, enough people submitted screenshots that Cyrus compiled some of the wildest ones in a TikTok video she posted on Saturday, May 2.

The greenscreen video shows the star in sunglasses and a hat, with the screenshots appearing behind her. A robotic voice offers some context, saying, “I asked my fans to send this song to their exes and screenshot their responses, and here’s what they sent.” The voice then goes on to read a selection of the messages, and Cyrus reacts accordingly.

The responses are a mixed bag. First of all, not everyone was daring (or, depending on the circumstances, misguided) enough to reach out in the first place. One of Cyrus’ fans set a firm boundary and opted out of the impromptu social experiment, saying, “That’s destructive behaviour.” Still, it was full steam ahead for others, and they got responses as varied as “I’m married bye” and “lets f*ck.” One ex even replied, “Aren’t you getting married in eight days?”

Destructive or not, Cyrus was loving it. Not only did she feature a number of the responses in her TikTok, she retweeted several others before she released the video. The tweets were especially hilarious because they included fans’ reactions to their former S.O.’s replies. The person whose ex wrote “lets f*ck” told Cyrus, “This is your fault.” Meanwhile, another tweeted, “lmaoo” after their ex replied, “I thought you blocked me.” Still funnier was the seemingly unfazed fan who wrote, “you ask, I deliver,” after they got a reply saying, “f*ck u,” and then a follow-up text adding, “btw the song is good.”

As all this Cyrus-instigated chaos was going on, she and the Kid Laroi were preparing to officially drop their remix. The track debuted at midnight on Friday, April 30, along with the music video. Cyrus tweeted it out, writing, “LOVE this song as much as I loooooove my new friend!” She went on to explain how the video came to be, and it apparently was very spontaneous.

Next up for the two will be Saturday Night Live. Cyrus was recently announced as the May 8 episode’s musical guest, and it looks like she’s decided to bring the Kid Laroi with her. She tweeted a photo of the two of them on April 28, writing, “Live from New York with little bro….” and tagged both him and SNL. The performance will be a fantastic treat for fans, especially those who need a pick-me-up after getting an awkward reply from their ex.

More like this
Shakira's Shady New Breakup Song Is Turning "Those Sour A… Lemons" Into Lemonade
By Stephanie Topacio Long
Miley Cyrus' "Flowers" Lyrics Reveal She’s Done With Liam Hemsworth For Good
By Jake Viswanath
Twitter Is Roasting Liam Hemsworth Thanks To Miley Cyrus' New Song “Flowers”
By Jake Viswanath
Hilary Duff's Husband Matthew Koma Has Her Name Tattooed On His Butt
By Jake Viswanath and Stephanie Downs
Get Even More From Bustle — Sign Up For The Newsletter
From hair trends to relationship advice, our daily newsletter has everything you need to sound like a person who’s on TikTok, even if you aren’t.