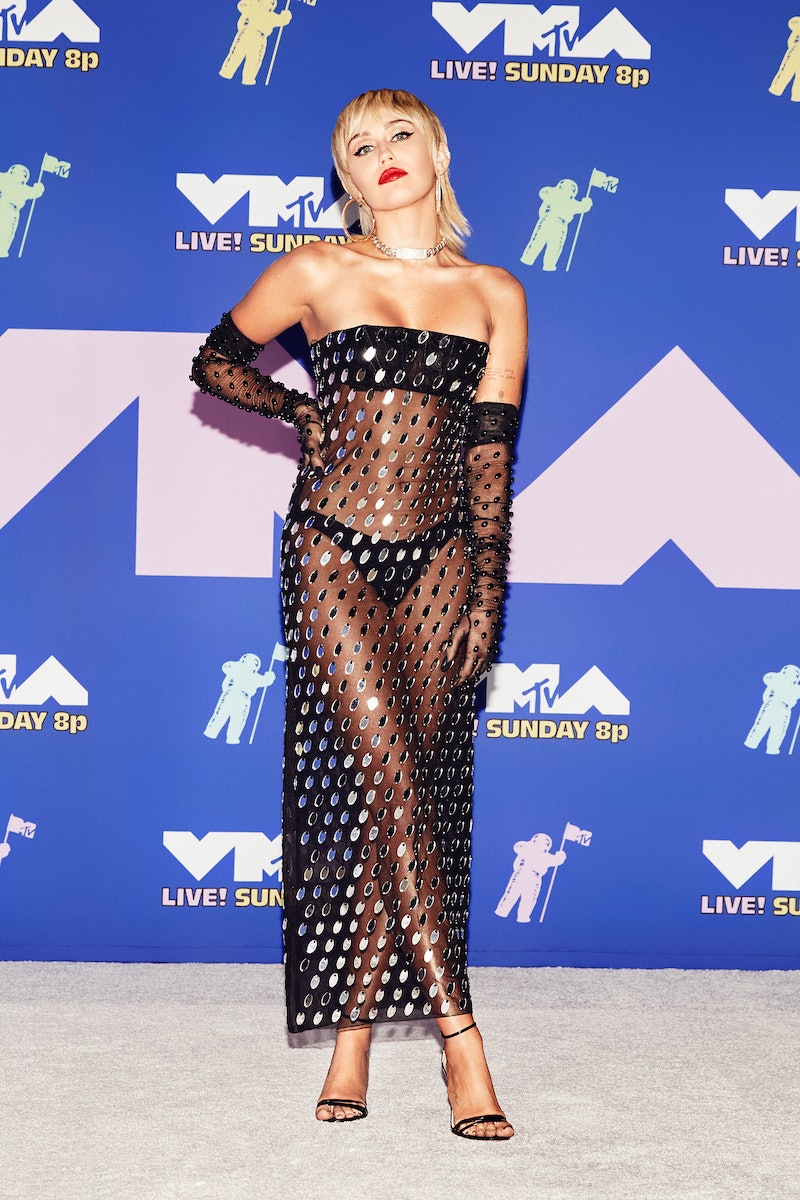 The looming threat of COVID-19 has taken a toll on everyone — celebrities included. And on Monday, Nov. 24, Miley Cyrus got real about how her sobriety has been impacted by the coronavirus pandemic. In an interview with Zane Lowe for Apple Music, the singer revealed that she recently "fell off" track before adding that she's now two weeks sober.

"I would never sit here and go, 'I've been f*cking sober,'" the Plastic Hearts singer said. "I fell off and I realized that I now am back on sobriety, two weeks sober, and I feel like I really accepted that time." Rather than getting mad at herself for going backward on her sobriety journey, Cyrus used the opportunity to figure out what caused the setback. "One of the things I've used is, 'Don't get furious, get curious,'" she said. "Don't be mad at yourself, but ask yourself, 'What happened?' To me, it was a f*ck-up because I'm not a moderation person."

The singer went on to explain that while she doesn't have a drinking problem, sobriety is important to her because she doesn't like her mindset under the influence of alcohol and prefers to be fully present. "I don't have a problem with drinking," she said. "I have a problem with the decisions I make once I go past that level of [intoxicaton]. I've just been wanting to wake up 100 percent, 100 percent of the time."

In a September interview with Joe Rogan, Cyrus said her sobriety was brought on by the vocal cord surgery she was forced to undergo in November 2019, which was due to her smoking habit. "I don't smoke anymore, and I'm sober," she said, adding that smoking and drinking went hand in hand for her. "... The vocal surgery kind of did it for me because I just learned so much about the effects. You're just taught it's not really the drinking, it's the staying up all night. Once you have your drink, you end up smoking."

In June, Cyrus told Variety that she had been "sober sober" for the past six months and that delving into her family history helped her remain on that path after surgery. "My mom was adopted, and I inherited some of the feelings she had, the abandonment feelings and wanting to prove that you're wanted and valuable," she explained. The singer also added that her dad, Billy Ray Cyrus, basically raised himself after his parents divorced when he was three years old. "I did a lot of family history, which has a lot of addiction and mental health challenges," she said. "... By understanding the past, we understand the present and the future much more clearly."

More like this
What Demi Lovato Really Thinks About Child Stardom, Depression, & Sobriety
By Radhika Menon
How Ghosts Inspired Kesha's New Music
By Jake Viswanath
Beyoncé’s Special Tribute To Sister Solange Was Both Touching & Hilarious
By Stephanie Topacio Long
Everything To Know About Taylor Swift’s 10th Studio Album, 'Midnights'
By Grace Wehniainen and Jake Viswanath
Get Even More From Bustle — Sign Up For The Newsletter