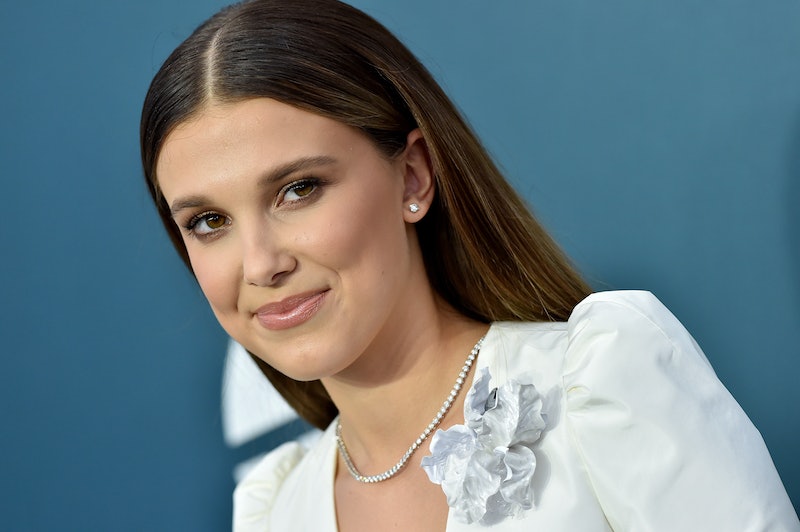 Stars, they're just like us — except for when they get bombarded by fans as they're running basic errands. In a video posted to her Instagram Story on Monday, Nov. 30, Millie Bobby Brown opened up about an uncomfortable fan encounter while she was out shopping with her mom. In the clip, the 16-year-old actor asked for respect and common decency after an unnamed person began filming her without permission, despite Brown asking them not to.

Brown said she was out buying Christmas gifts with her mom when a fan approached her and asked to take a video of her but not with her. "I said, 'Um, no,'" she recalled. "But why would anyone want to be taken a video of? Of me? It's not like of the both of us." The Stranger Things star made it clear that she didn't need to justify her reasoning to anyone. "If I don't want to be taken a video of, I don't have to be," she said. Unfortunately, the encounter only got more uncomfortable when she declined the request.

Apparently, as Brown and her mom were paying at the register, the fan approached them again and began filming without her permission. "I said, 'I'm a human being. Like, what more can I ask from you?'" she remembered while holding back tears. "She said, 'So I can't take a video of a human being?' And I said, 'No, not when I said no.' It just makes me upset when people try to push the boundary, and I just wish people were more respectful."

Brown ended the video by asking fans to treat her and others with respect, no matter how famous they are. "I'm still trying to navigate this all and it's still overwhelming," she admitted. "Where are my rights to say no?" After posting the video, she received support from the Stranger Things writers, who relayed a similar message on their Twitter account. "Be kind to others," they wrote. "Find compassion. Wear a mask. All those things cost zero dollars and take zero energy."

After opening up about the awkward incident on social media, fans suspected that the encounter was the reason why Brown deleted her TikTok on Monday, when she posted a message about kindness in a since-deleted Instagram Story. "Realizing that surrounding yourself with positivity is the happiest way of living," she wrote, according to Seventeen, insinuating that she left the platform due to negativity and hateful comments.

While she hasn't addressed the sudden removal of her account, she reassured fans that she is okay in a since-deleted Instagram Story. "I am totally fine now," she wrote, per Entertainment Tonight. "But was emotional in the moment because I felt uncomfortable and disrespected. It's important to set your boundaries and speak up. I love you guys. Be kind to one another!"

More like this
Nicola Coughlan’s Description Of Meeting Olivia Colman Is Just So Nicola Coughlan
By Sam Ramsden
Confusion Reigns After Kanye Changes His Instagram Profile Pic To Kris Jenner
By Jake Viswanath
The Try Guys Cheating Scandal, Explained
By Grace Wehniainen
The Real Reason Russell Brand Decided To Quit YouTube
By Sam Ramsden
Get Even More From Bustle — Sign Up For The Newsletter