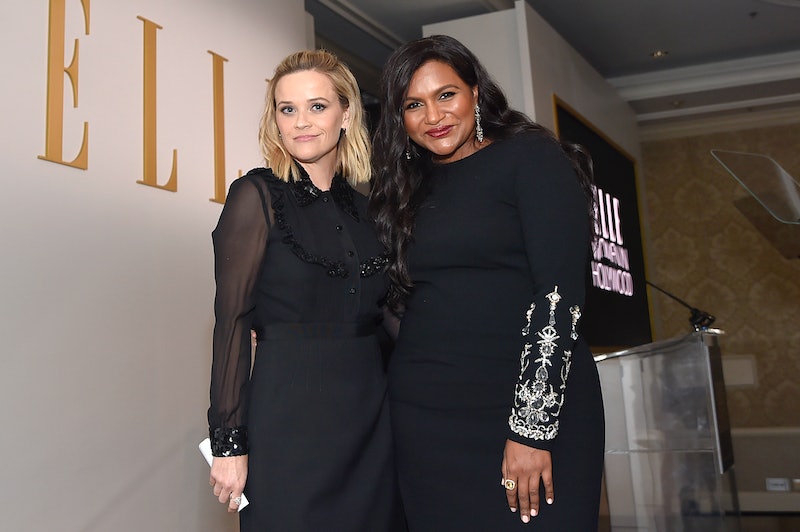 If there was one person who could turn this year around, it's Elle Woods. And now, thanks to the latest details Mindy Kaling has shared about Legally Blonde 3, we now have something to collectively look forward to when 2020 finally comes to a close. The former Office star, who is currently writing the movie with Brooklyn Nine-Nine's Dan Goor, recently provided an update on how the creative process is coming along and what fans can expect to learn about our favorite fictional lawyer from this third installment in the franchise.

"It's been really funny to write," Kaling told Good Morning America on Tuesday, Oct. 6. "I'm working on it with my friend Dan, and I think it's going to be a great movie for Reese [Witherspoon] and people are going to love to see her in this part.” But as excited as Kaling is to dive into the world of Elle Woods, being a longtime fan of the movie herself, she was hesitant to sign onto the project, knowing how much pressure it would be to live up to fan expectations.

“I was nervous because the movie is so iconic,” she explained. “But then I thought, ‘It'd be really fun to see that character in her 40s. What is Elle Woods dealing with as a 41-year-old woman?'”

It also doesn't hurt that Kaling and Witherspoon are friends in real life. And, like the true fan that she is, Kaling has subjected Witherspoon to an endless array of Legally Blonde quotes throughout the years, which is partially how the subject of creating a third film was initially broached. “I have always quoted the movies to her — I was that annoying friend that would be like, ‘Bend and snap' to her," The Mindy Project star recalled. "And she asked me, ‘You know, I'd really love to revisit this character.'”

Not much else is really known yet in regards to the overall plot of Legally Blonde 3; however, Deadline reported that the film "will be much in the spirit of the first film" and focus prominently on female empowerment. That certainly sounds in keeping with the first film, which found Elle not only getting accepted to Harvard Law School, but thriving there as well — and looking darn good while doing it too. In the words of Ms. Woods herself, "What, like it's hard?"