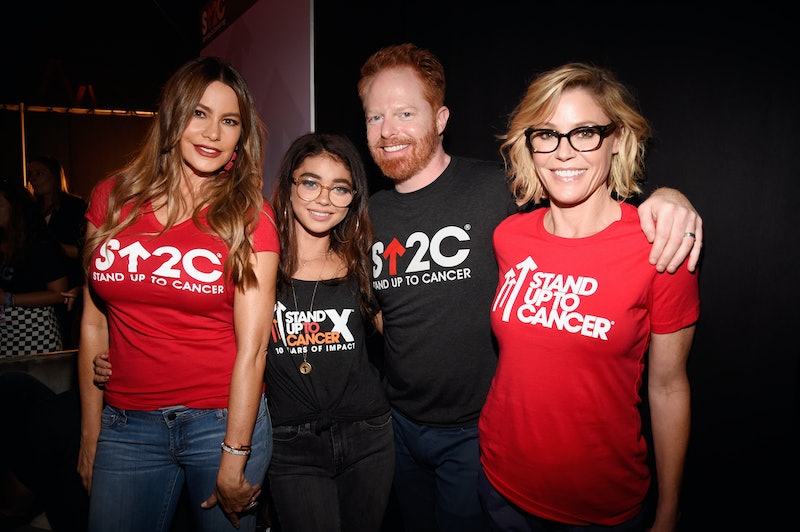 The Dunphys are still keeping it all in the family. It's only been five months since ABC aired the Emmy-winning comedy's series finale, but the first Modern Family cast reunion is already in the books. Jesse Tyler Ferguson (Mitchell Pritchett) hosted a Friday, Oct. 23 gathering that included co-stars Sofia Vergara, Sarah Hyland, and Julie Bowen — and the women were kind enough to share a couple photos with their fans on social media. Vergara, who played Gloria Delgado-Pritchett for 11 seasons, thanked Ferguson and his husband, Justin Mikita, for organizing, though she noted they were "missing half of the gang." Regardless, Vergara wrote that the get-together — her first night out in seven months — was "so much fun!!!"

Vergara's husband, Joe Manganiello (sporting a new platinum blond mohawk), also appeared in the photo of the masked group, holding their chihuahua. Sharing the post on her own page, Hyland, aka Haley Dunphy, called their dog "the real star of this photograph," adding, "J’adore ma famille" ("I love my family") in her caption. She also commented on Vergara's Instagram photo, "I missed you!!!!!! 😘😘😘😘😘😘"

For her part, Bowen (Claire Dunphy) also posted a similar group photo. "So amazing to see these people again," she wrote. "And, yes, I’ll get a new mask tomorrow..."

Although it wasn't explicitly stated, the reason for the reunion seemed to be a birthday dinner for Ferguson, who turned 45 on Oct. 22. To mark the occasion, Hyland shared an Instagram tribute, along with a few photos from over the years. She wrote: "Happy tears, a warm embrace, and a Birthday Queen: A series✨ 11 years of birthdays and almost 12 years of friendship with you @jessetyler 💕 I love you SO much and I’m so lucky to have you in my life. I can’t wait for us to be together and sing show tunes again! You’ll always be the Seymour to my Audrey 🤓 Happy Birthday to my favorite g’uncle!!!!💋"

As for whether the Modern Family cast could actually reunite on-screen someday, series co-creator Christopher Lloyd said "it's possible" and that he purposely left the door open. Or, if you've seen the Modern Family finale, they, more literally, left the light on. "The intention of that image was more to make people imagine that the family will reunite," Lloyd explained to Entertainment Weekly in April. "That's a lovely thing people have in their lives when they move on, that there’s a home base, and that you can come back to that base. To even just know that that light is on can do wonders for you wherever you are in the world."