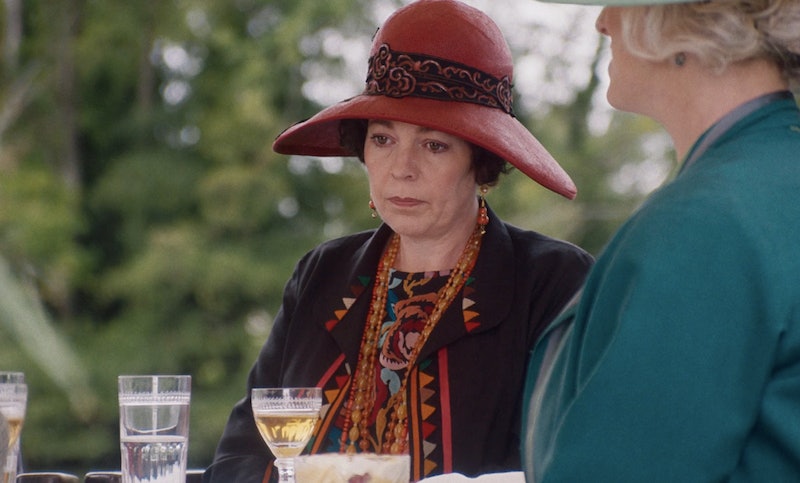 Based on Graham Swift’s 2016 novel of the same name, Eva Husson’s Mothering Sunday tells the story of a wealth young man and his secret lover – the housemaid – against the backdrop of post-WW1 Britain. The film has already caused buzz on the 2021 film festival circuit ahead of its release later this month and now, in an exclusive clip, Bustle readers can have a first glimpse of the hotly anticipated drama.

In this scene, the characters of Mr and Mrs Niven (played by Colin Firth and Olivia Colman, respectively) are having waterside drinks with their friends the Sherringhams and the Hobdays. They have gathered to celebrate the engagement of Emma Hobday (Emma D’Arcy) and Paul Sherringham (Josh O’Connor).

“I would like to propose a toast,” Mr Niven announces to the table, while an uncomfortable-looking Mrs Niven looks on. “My wife and I are so happy to be here with you all, and with your children, who have been so good as to feel like our children,” he says, his wife wincing. She is mourning the passing of her sons, who perished during WWI.

“Even if one of them is not bloody here,” Mr Sherringham interjects, referencing his son Paul’s absence from the celebratory get-together. Unbeknownst to the guests, Paul – who recently returned from WWI himself – is preoccupied with the Nivens’ housemaid Jane, with whom he’s been having an affair for many years.

“They’re all not f*cking here, they’re all f*cking gone,” Mrs Niven responds, her grief overtaking her.

“To the bride. And to the absent groom,” Mr Niven says, following an awkward pause.

Directed by the Palme d’Or-nominated filmmaker Eva Husson and penned by acclaimed screenwriter Alice Birch (of Normal People fame), Mothering Sunday follows the story of housemaid Jane Fairchild (Odessa Young) who finds herself alone in the home of her employers, Mr and Mrs Niven, on Mother’s Day 1924.

While the Nivens are away, Jane seizes the opportunity to spend an afternoon with Paul, who lives in a nearby manor house. We soon learn that their affair – as passionate and endearing as it is – is somewhat doomed, threatening to tear family ties apart.

Joining Firth, Colman, O’Connor and the rest of the cast is the BAFTA EE Rising Star nominee Ṣọpẹ́ Dìrísù as Donald, an academic philosopher who forms a relationship with Jane.