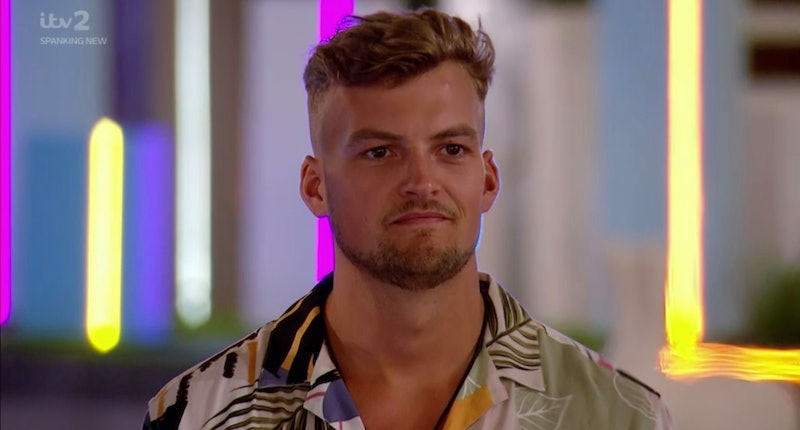 Each season of Love Island can be defined by a certain phrase. While staples such as “my type on paper” emerged early on and soon became baked into the DNA of the show, others like “dick sand”, “doing bits” “congrats hun” and, of course, “MESSAGE!” have become emblematic of their respective season, each one following the same life cycle: spoken, repeated, hashtagged, and, finally, emblazoned on a Primark t-shirt.

This year, it’s “moving mad.” First introduced to the villa by Aaron (according to a comment he made during his appearance on Love Island: Aftersun), the phrase means to behave in a way that is out of character or unexpected. Despite being primarily associated with the young Black British community, “moving mad” has quickly been co-opted by season seven’s white contestants – most notably Hugo, whose cringe-worthy use (or, rather, misuse) of it reached its peak in Casa Amor. In fact, the phrase has become so intrinsically linked with this season that producers even named a challenge after it: the fateful Mad Movies.

Language is incredibly infectious. It’s easy to pick up and regurgitate, especially once it enters the mainstream. Common words and phrases that originated from Black communities include “hot girl summer”, “bare”, “innit”, and “peng” , all of which I’ve heard many middle class white English people use. Outside the confines of the Love Island villa, social media makes the spread of this language even more complex; modes of language are already embedded in memes, TikTok videos, and GIFs that we share without a moment’s thought.

Despite being primarily associated with the young Black British community, “moving mad” has quickly been co-opted by season seven’s white contestants – most notably Hugo, whose cringe-worthy use (or, rather, misuse) of it reached its peak in Casa Amor.

While the issues around cultural appropriation are nuanced, especially when it comes to language, this season of Love Island in particular has highlighted some serious issues in the way Black British phrases can be co-opted, misattributed, and misused – sometimes in the most derogatory way possible.

To begin with, one thing that’s clear is that white people in the villa such as Hugo and Chloe have been able to pick up certain language quickly to acquire social capital. To make them seem cooler and more relatable.

One of the most memorable moments in the season was Chloe describing her annoyance at being rejected by Toby. In the beach hut, she said “it’s like a violation, that’s very muggy… I’m not going to let someone take me for a prick, no way” in what felt like a performative “roadman” accent. This seems strange given she entered the villa with a firmly middle class, middle England accent, with no trace of a South London drawl (remember the famous voice note from episode one?). Within hours, her beach hut outburst went viral in memes and TikTok videos.

It’s worth noting that Chloe picks up this language at very particular moments – often when she’s passionate or vexed about something. When she wants to be sweet or vulnerable, she goes back to adopting a “whiter”, almost baby-like voice. When liaising with other posh white people on the show like Chuggs, her newfound slang disappears, demonstrating the way in which white middle class people can use Black vernacular to their advantage and then, when it’s no longer useful to them, simply discard it. On the other hand, Black people who genuinely speak in this way cannot, and they are often mocked or looked down on for it. Many Black British people have to go to great efforts to play down their roots in order to come across as acceptable or “professional”. Sociologist W.E.B Du Bois referred to this as Black people living a “double consciousness,” having to be so aware of how a racist society views them. Psychologically, it makes Black people feel their identity is inferior.

Paradoxically, despite stigmatising Black people for their mannerisms, wider society often wants to wrongly credit white people for the inception of them. We’ve seen this concept play out recently on TikTok, with white content creators getting millions of views and likes for dance routines or concepts originally posted by Black creators. The same thing happens with language. Just recently, Metro ran an article with the (now amended) headline “Love Island 2021: New Phrases You Need to Know as Hugo Coins Moving Mad”, directly crediting a posh white man for the creation of a Black phrase. Too often, it’s only when Black ideas enter the mainstream via a white person that they are deemed to have legitimate cultural relevance.

What adds to the problem is the fact that, in some ways, Love Island can actually legitimise language appropriation. As one of the most popular and culturally pervasive shows on British TV, it doesn’t take long for a phrase heard on Love Island to be picked up by viewers – most of whom will also be ignorant of its origins. As a result, the community that created that phrase is left even further obscured.

At times, it’s felt as if Hugo is using Black vernacular in an effort to relate to the boys, especially the Black ones. Despite being a private school teacher from Hampshire, he was fond of calling them “brother” and became almost a caricature of Blackness, in contrast to Black men in the show like Aaron and Teddy who actually used Black vernacular pretty sparingly. Hugo’s efforts to communicate kinship through his language, however well-intentioned, made it seem as if he viewed the Black contestants in a one-dimensional, stereotypical way. Worryingly, his tone switched when he fell out with Toby over the treatment of Chloe, referring to him during the Sports Day challenge as “boy” in a patronising effort to prove his point. With racist American South Jim Crow connotations, it’s an uncomfortable phrase to hear a white man use.

While language appropriation may seem harmless to those who don’t fall victim to it, this year’s Love Island has actually offered an example of how the issue can be pushed into more extreme territory with an unearthed Instagram comment from contestant Danny Bibby.

While language appropriation may seem harmless to those who don’t fall victim to it, this year’s Love Island has actually offered an example of how the issue can be pushed into more extreme territory with an unearthed Instagram comment from contestant Danny Bibby. His entrance into the villa was quickly marred by the revelation that he’d used the N-word publicly as a term of endearment to his friends. While the discussion around language appropriation is nuanced, the use of Black racist slurs by non-Black people is not: it is simply never acceptable. In his apology after leaving the villa, Danny said “I have listened to the likes of 50 cent, Drake and Eminem since I was a kid, and I used it like they do as a term of friends/bro/brother,” adding “I now know the term is unacceptable in any context.” It was a pretty poor apology, and the fact that he referenced a white rapper in his defence speaks volumes. Despite protests from viewers, Danny was not immediately removed from the villa upon discovery of this post, meaning other Black contestants may not have known his history of using racial slurs.

It’s clear that, when it comes to language appropriation, the situation is complicated. Naturally, when we’re around people, we pick up new ways of expressing ourselves and, in the age of social media and reality TV, this can happen at an exponential rate. However, it’s clear that, if left unchecked, the issue can take on a sinister edge, leading to the disempowerment of marginalised communities.