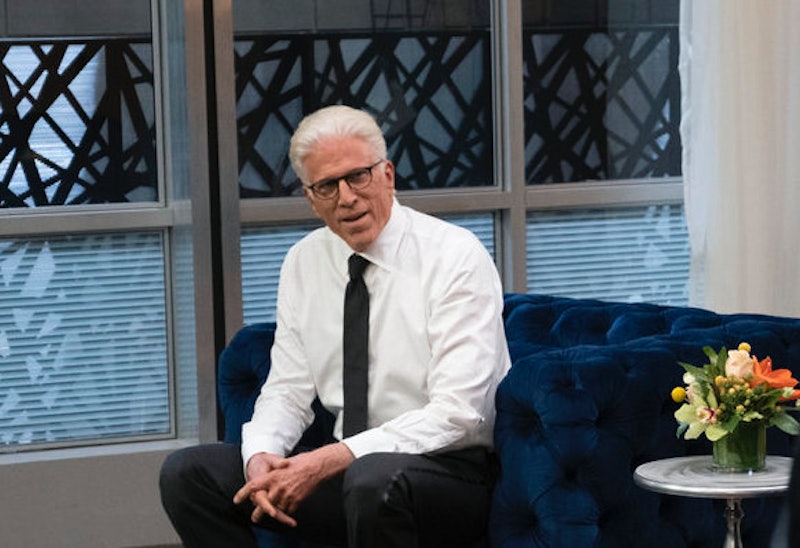 Tina Fey's new NBC sitcom, Mr. Mayor, was originally conceived as a 30 Rock spinoff following Alec Baldwin's Jack Donaghy as he becomes the mayor of New York City. The concept was retooled after Ted Danson was brought in for the lead role (and the setting was changed to Los Angeles), but they still wound up with an ensemble cast fit to match their predecessor. The end result is a delightful show about an out-of-touch leader and his team of at-times bumbling aides all trying to do good — and accidentally doing some bad along with it.

Though Danson is the star, he told Variety that each of the characters are utilized fairly equally. "They're such wonderful, nimble actors," he said of the cast, which include alums from Crazy Ex-Girlfriend to Saturday Night Live. "What's wonderful is when you have a cast of five or six people that the writers can write to each one of them, and have them be able to carry a story. And I think that's where we're headed by the end of Season 1."

Here's everyone you can expect to see when Mr. Mayor premieres on Jan. 7.

The newly elected mayor of Los Angeles, Neil didn't really get into the gig to help the city – he just wanted to show his teenage daughter that he wasn't useless. As such, he quickly finds himself in over his head.

Danson most recently appeared on The Good Place, and he joked to Variety that he wanted to do another sitcom because of his hair. "I figure I have about three more years with this hair. So, you know, milk it," he said.

In a contrast to the mayor, Arpi has spent her whole life trying to better her community. Becoming deputy mayor gives her more power than ever to accomplish that, and she's not letting it go to waste.

This is Hunter's first sitcom, and she told Variety that she just tried to follow Danson's lead. "It is a different thing [to do a sitcom]. So it was scary. Now it's no longer scary. And I just continue to watch and listen to what Ted's instincts are." Prior to Mr. Mayor, Hunter appeared in Succession, voiced Elastigirl in The Incredibles, and starred in The Big Sick.

Mikaela is good at being Mayor Bremer's chief of staff, but she's also a bit of a millennial stereotype. She Instagrams her duties, makes vision boards, and changes the bathroom passcode to the birthday of her favorite feminist icon — Katniss Everdeen from The Hunger Games.

You probably know Lovell from Crazy Ex-Girlfriend, on which she played Rebecca Bloom's extremely Over It neighbor Heather Davis. She also voices Mermista in She-Ra and the Princesses of Power.

As the chief strategist for the mayor, Tommy works closely with Mikaela and seems to really believe in his ability to effect change.

Before Mr. Mayor, Cabellon had a short stint on Orange Is the New Black and appeared in shows like New Amsterdam, God Friended Me, and Modern Love.

Jayden is Bremer's well-meaning but completely inept communications director; Mikaela and Tommy only want to keep him around so they can throw him under the bus when problems arise.

Moynihan is best known for being part of the Saturday Night Live cast, and he's a frequent voice actor on projects like DuckTales, Nature Cat, and Star Wars Resistance.

Neil's daughter is running for a pretty important position herself: class president. She might learn a thing or two from watching her dad be the mayor, but let's face it — it'll probably be the other way around.

Kennedy is still at the outset of her career, though you may recognize her from recurring roles on shows like The Walking Dead, The Night Shift, and Speechless.